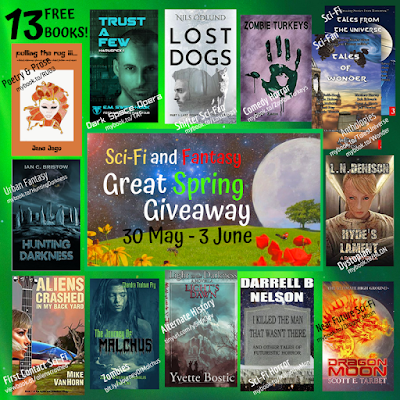 It's time to Spring into Sci-Fi!

I'm delighted to say that two of the Inklings Press anthologies are part of a 13-book giveaway from the Sci-Fi Roundtable, running from May 30 until June 3.

Science fiction and science fantasy are the themes of the two anthologies - first there's Tales From The Universe, with ten stories soaring into space.

In The Devout Atheist, Daniel M Bensen explores a world where faith and science have taken very different paths.Rob Edwards brings the world of Agatha Christie into the future in his tale of murder and artificial intelligence, Upgrade To Murder.Memory proves both the most precious and the most dangerous thing in R.H.Nelson's Suliko, while in Dead In Space, Matthew Harvey follows a rescue mission to a ship where a singular cry for help has gone out.In The Familiar Road, Pedro Camelo discusses love - when all may not be as it seems, and in Cosmic Egg, Ricardo Victoria launches us into a world of space fantasy, where the impossible is real.Brian S Converse brings matters back to Earth, a very... Small World in his tale of loyalties, and Brent A Harris pays homage to the soaring science fiction of the likes of Star Trek in his tale The Ellian Convergence.I have a story in there - a military sci-fi tale of clones fighting on the edge of the galaxy in Lazarus Soldiers, before Jessica Holmes rounds out the collection with a discovery that could change people's lives, somewhere Deep In The Rock.

Rob Edwards takes us on a spaceship powered by magic in Lair of the Thunderlord, and Terri Pray introduces us to a very unusual bodyguard in Grace.

Jeff Provine has us dancing along the edge of a black hole in a story swirling with Inuit myth, while E.M.Swift-Hook brews up a story from her own mythology, where folk tales and science intertwine.

Jessica Holmes' An Honest Trader takes us to a world of skyships and mutant powers, slavery and piracy, while Brent A Harris' A Twist In Time spins us off into a world of time travel and Dickensian characters.

I have another story in the collection - a tale of the last magic wielder in Britain on the run from government kill teams, and seeking help from the woman who used to be his enemy.

I'm looking forward to picking up several of the other books too - particularly Hyde's Lament, by L N Denison, whose Only The Few I reviewed here, while I reviewed Yvette Bostic's Napoleonic fantasy Light's Dawn here.

Check out the full links for every book below:

So fill those Kindles! And remember, whichever books you pick up, there's no better way to repay the authors than leaving a review. Happy reading!
Posted by Leo McBride at 20:59

Email ThisBlogThis!Share to TwitterShare to FacebookShare to Pinterest
Labels: free books, Sci-Fi Roundtable, Tales From The Universe, Tales of Wonder