Hi all, and welcome to the latest round of reviews here on the blog. Today, a veritable smorgasbord of books are covered - from Roman mysteries to post-apocalyptic survival, space spiders to YA page-turners. The first four reviews in this column are provided by Brent A. Harris, the last two by me. So, without further ado... 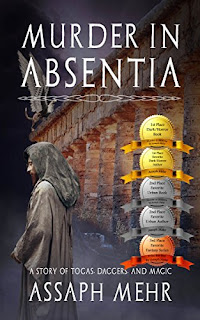 Murder in Absentia, by Assaph Mehr

Murder in Absentia is one of those rare books published by an indie outfit that sets the bar high for the rest of the publishing world. Mehr makes us believe we are in a magical version of Ancient Rome (Egretia), immerses us in a historical richness that even some purveyors of historical fiction lack depth in, and yet still delivers a compelling whodunnit which keeps the pages flying. The magic is no mcaguffin -- Mehr offers his protagonist, Felix the Fox, no easy shortcuts. His mission: solve the murder of the son of a high-ranking (and rich! as Felix might point out) Egretian Patrician, and do so quietly. Felix must use his reasoning, his limited knowledge of the arcane, and his instincts, to piece together the mystery before his body is the one that turns up next. A solid read, a well-crafted mystery, and togas! An easy 5 Stars. 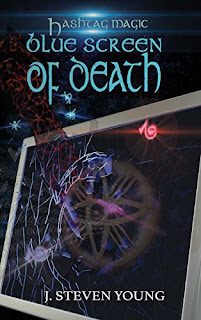 Despite an excellent cover and clever title, the combo of technology and magic ultimately lacks spark.
The YA moniker doesn’t mean what it used to. With mega-hits like Harry Potter, Land of Stories, and my personal favorite, Hunger Games, YA has proven that it has broad appeal. So, when I was asked to review Hashtag Magic book 1: Blue Screen of Death, I was certainly willing to try it out.
Hashtag follows the story of a young user of magic as he embarks to discover what makes him special. He faces challenges from his school of magic. He is bullied by the son of a rich patron. He excels at the unique school game. And he must develop his newfound discovery of magic to confront the tragedy of his past.
While it sounds much like Harry Potter, I got the feeling that this book wanted to be so much more, to be different. In addition to the normal story arc of a burgeoning boy wizard, Hashtag conjures space aliens and phone apps. These apps help our heroes channel their magic in place of a magic wand.
The issue I have with this, however, is that you can change the drapes, but the room is still the same. Technology and Magic have typically been at odds. And the mixing of the two here, while clever, isn’t enough to distance itself from its more famous counterpart.
The second issue, and perhaps more alarming, is the place where the story starts taking shape. We don’t get into the technology aspect until 60% of the way through the book. That’s a lot of pages where nothing happens except for the typical story arc with we’ve seen with other boy wizards, as described above.
Once the reader passes this point, however, the book is good. It starts living up to its potential. And just as we are getting into the meat of the story--it ends. Abruptly. Yes, book 2 leaves right where book 1 left off, but there should have been something substantial to end the story with. Even Harry Potter tells self-contained stories within the overall narrative arc of the series. Hashtag Magic offers no real resolution, no self-contained story.
Additionally, the story is also told in third person omniscient. That means we know what is going through everyone’s head at all times. The amount of head-hopping this book does is staggering, even within the same paragraph. Some people don’t mind not knowing whose head they are supposed to be in, but it doesn’t work for me. Feel free to add another star if third Omni is your jam. Perhaps with another pass for pacing and POV clarity, and a firmer ending, Hashtag would be magical. For now, I can only rate it 3 Hashtags out of 5.

Hashtag Magic is available on Amazon. 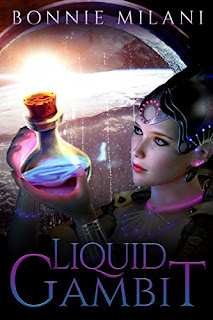 I really loved this story! However, I want this review to be a bit more than, I LOVED THIS STORY. Which I did. It’s stories like these which reminds me what happens when you have a writer as brilliant as Bonnie. She fires on all cylinders. In fact, I think it has a vibrant and colorful charm which sets it apart from its Casablanca counterpart.
I loved the characters, I loved the senses Bonnie evokes (mostly the under-used sense of smell that most writers tend to overlook) and I loved the central conflict. The story surrounds a vial of water from Old Earth – Homeworld. But, like the bar itself, it dives into darker territories of sex trafficking, slavery, genetics tampering, crime, and underworld filth. Yet, at the same time, our heroes elevate themselves skyward (spaceward?) and prove that – despite their circumstances – they can rise above the din.
If you’re looking for a short SF read, Liquid Gambit is splendid. 5 stars

Pick up your copy here: https://www.amazon.com/Liquid-Gambit-Bonnie-Milani-ebook/dp/B016JH06VK/ 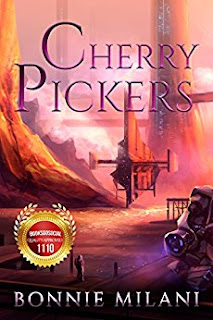 Spiders man! Like I don’t dig spiders. Yet, I really dug these arachnids. Should be a testament to how compelling the story was when every page was filled with my deepest fears. It was also filled with strong characters, a clash of conflicts, and a nasty villain far scarier than any spider. Oddly enough, this isn’t a horror story. It’s about a girl coming to age in a harsh colony settlement where just about everything around you wants to kill you. And, it’s filled with giant spiders. So, Australia.
Yet our main protagonist Nikki isn’t afraid of her spider, Sam. She isn’t afraid of anything. She just wants to be treated as a woman. To do so, she must snatch herself a cherry picker, on a world essentially devoid of men. Jake, she supposes, will have to do. But he’s not exactly willing and there’s a bit more to him than he’s letting on. As events unfold, Nikki will have to learn there’s more to woman-hood than sex – and spiders. Cherry Pickers is a fun, traditional Sci-Fi story set in Milani’s Homeworld Universe. It’s certainly one of my top picks. 8 out of 8 Hairy Legs.

Editor's Note: Both of Bonnie Milani's titles here have previously been reviewed on the blog by Leo McBride - you can check out those reviews here and here, the latter including the previous cover of Cherry Pickers.

Brent A Harris is a Sidewise Award nominated author of alternate history. He is the author of A Time of Need, an alternate history of the American Revolution. You can find more of his work in Tales from Alternate Earths and Tales from the Underground. He can be reached through his website at www.brentaharris.com 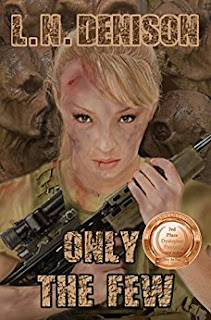 Only The Few, by L.N. Denison

The North of England is a devastated wasteland full of strange and deadly creatures. And I used to live there! No, seriously, the real North is not like that. It's a fabulous place, but it's quite the piece of fun watching it recast as a post-apocalyptic wasteland in L.N. Denison's slice of military sci-fi.
Corporal Catherine Hyde is the sole survivor of an explosion in London that wipes out the rest of the building she is in at the time, hiding herself away in a blast shelter as she loses family somewhere in the chaos above her. She emerges into a shattered Britain, with a series of such blasts having wiped out the bulk of the nation. After finding a few others from her military unit still alive, she is given the job of hunting for civilian survivors and is sent north.
The dangers facing her are many - from genetic anomalies called cavers who lurk in dark hideaways ready to torture and devour the unfortunates they capture to perhaps the more deadly enemies, some of the surviving humans, Hyde is left to fight her way through all manner of opposition.
She's a smashing character, complicated in her emotions and determined to never give an inch when it comes to pursuing her mission. She's fierce, bright, intelligent and makes for a great read.
The pages zip by as you're reading, with a real pace throughout the book. Sometimes, I wished it had slowed down a little as it seemed a couple of situations were resolved a little too quickly before their implications are really explored - but hey, it's the end of the world, not everything is neat.
It's not without its hiccups, but I enjoyed the read - so much so that I blasted through it in just two sittings.  I'm looking forward to more!

Only The Few is available on Amazon here. 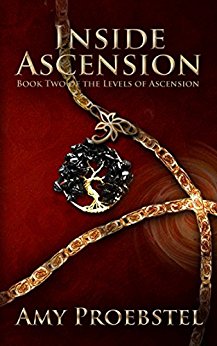 Inside Ascension, by Amy Proebstel

First things first, this is the second book in the Levels of Ascension series from Amy Proebstel. I mean, sure, this should be obvious but I say it for a very practical reason - if you use the Look Inside feature on Amazon, you'll find the first couple of chapters and preface are very heavy on the infodump side to catch readers up to what has gone before. Don't be put off by that, the rest of the book doesn't follow in those early footsteps.
The story picks up from where book one left off - in which lead character Amanda found herself in the land of Tuala, a strange world where time moves differently, and when she was torn away from that world, had left her children, twin girls, there.
Understandably, she wants to get back to her children and is helped by her parents, who piece together that the strange telepod devices resemble the supposed flying saucer found in Roswell. And off they go to try to find a way back.
Meanwhile, the villain of the first book, Petre, is hunting for Amanda in Tuala, unaware that she is now on Earth - and he hires a man named Ninan to seek her out. Ninan's investigation is the best part of the novel. He's a really interesting character - being used by a villain for his own purposes but seeking out a place in the world of his own, and beginning to question Petre's purposes.
Sadly, though, there's a lot of the novel that is slowed down by lengthy dialogue and with not a lot of action - and a couple of major plot points pretty much happen by coincidence rather than design. Amanda's return to Tuala doesn't happen until quite late in the book - despite pretty much finding the right person to talk to about it in Roswell almost right away. To be honest, Amanda is largely peripheral for a swathe of the book, and that doesn't seem to be the best position to have the main character in. Add to that a remarkable amount of head hopping between characters - we even briefly see the world from the perspective of one of Amanda's babies for some reason - and it's hard to really get into the flow of the book.
If book one hooked you, then this does pick up right where it left off - and positions us at the end for the third in the series, and Proebstel does a good job of getting the reader up to speed at the start for those who missed book one. For me, though, the roaming viewpoint and lack of driving character action kept me from really engaging.

Inside Ascension is available on Amazon here.