It's been a hectic month - so not as much reading as usual this time around - but here are my reviews for two books, plus an audiobook about an anti-social Murderbot that just wants to watch TV. 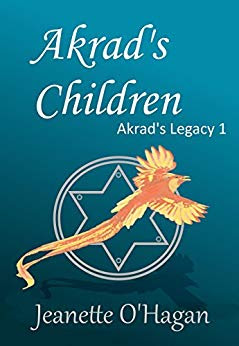 I've enjoyed the short stories of Jeanette O'Hagan previously - but this was the first novel of hers I've read. It won't be the last.
There's a habit many fantasy and sci-fi writers use where they plunge the reader into a battle at the start of the story, introducing the characters in the middle of conflict. It can backfire - after all, who are these characters, and why should we care about them?
Instead, Jeanette sets us a mystery, a fantasy whodunnit that leaves us gripped as to what will happen next - before leaping back in time to the battle that started events tumbling like dominoes towards that ultimate fate.
The story hinges around the character of Dinnis, cast off by his father yet finding himself with an opportunity in battle to draw nearer to him.
The outcome leaves him and his sister given a chance to survive in a seemingly enemy palace - and perhaps find a home for themselves along the way.
It becomes a story of palace intrigue that spans years - though each chapter is short and sharp, zipping us by through the story. The characters find themselves challenged by the circumstances they find themselves in, and the prejudices they encounter, growing along the way.
I enjoyed the book - it is book one, so it is part of a larger whole, so it does feel at the end that there is a lot more to discover, but that's no bad thing. 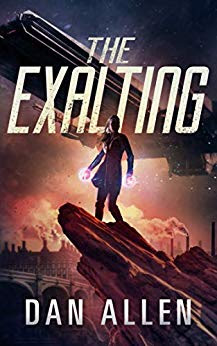 The Exalting, by Dan Allen

The Exalting is an unusual read - in many ways, it's almost two separate books in one.
The story is initially divided up between the stories of Dana - a young druid who finds herself on the run from forces determined to retrieve an object she is given by a dying stranger - and Jet, a space marine sniper who finds himself battling against an overwhelmingly superior force and launching a race through space to get to the world where Dana lives before the enemy.
It makes an odd mix, like the Shannara novels meeting the Warhammer 40k universe - especially as Jet finds himself fighting alongside elves and dwarves against bulletproof orcs.
For much of the novel, the two stories are almost entirely separate - it's only late on that the two are drawn together.
The most exciting of the stories is Dana's - as she tries to find a way to survive with little help. Her powers are intriguing too, feeling the pain of animals around her as they are hunted, then learning how to use that connection to aid her as she grows.
The planet she lives on is intriguing too - with people bound to the bloodstones of their communities, their willpower bent to serve the gods who wield them. In all this, Dana is an aberration, bound to no one and an outcast from her own home.
Jet's story, by contrast, is perhaps a bit too shipbound - and has occasional Earth references that are are a bit odd too, such as Jet and his AI chatting about the author Orson Scott Card. Now that's longevity, Mr Card.
I do hope the story continues - because it seems there's a lot more to come from these characters, and Dana's story certainly makes for a fun ride. I hope we'll see more of her.

The Exalting is available on Amazon here. 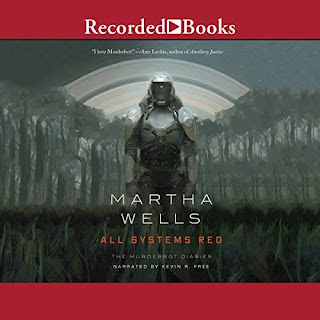 Meet the Murderbot!
This is the first book in the Murderbot Diaries from Martha Wells, and I've never met a nicer killing machine.
It's a novella - the hero of which is a self-aware SecUnit robot. It's also hacked itself, to get rid of the module constraining it. And it calls itself Murderbot. Just not out loud. That might scare the humans.
As plots swirl around it, the Murderbot sets about trying to be left alone and wanting to get back to the TV shows it streams. I can so very much empathise.
Laced with wit and sarcasm, this is a really fun sci-fi tale. The narration is good too. Some might grumble at the length for the price as an audiobook, but I promise, all 3 hours and 17 minutes are fun.

All Systems Red is available on Audible here.
Posted by Leo McBride at 16:48