Welcome back to Apex Magazine 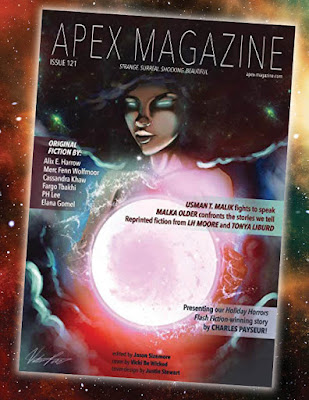 Check out that lovely cover by Vicki be Wicked

APEX magazine is back!

For those unfamiliar with the magazine, it has been on hiatus recently. It's a magazine of science fiction, fantasy and all those words that slip in between those categories - and it's been missed.

I got a chance to read the new issue ahead of its recent relaunch - it's out today - and it's been like meeting an old friend again.

Editor Jason Sizemore talks in the introduction about the return, the reasons for the hiatus, and the new schedule. It'll now be a bi-monthly magazine. It includes essays, author interviews, an interview with cover artist Vicki Be Wicked, and short fiction reviews by AC Wise.

Most importantly, it is brimful of stories. Six new stories, two reprints - plus a flash fiction competition winner. Like any mix of stories, readers will enjoy some more than others, and I'm no different.

Fittingly for our pandemic era, Elana Gomel's The Niddah was one of the stand-outs. Elana conjures up a world where a future pandemic has led to the reinvention of society, with a new virus bringing about radical changes in physiology for people - but only when an infected person comes into contact with the blood of another. Given how strained social conventions are today even in the face of a less radical pandemic, it is easy to believe this reimagined world in Gomel's story, and even less surprising that the worse end of the deal falls to women. Already in our COVID-19 world, women have been bearing the brunt economically more than men - and that becomes ever more so in this world where one drop of blood could kill or transform, with women forced to hide away during their period to avoid contact with others. That's the set up - but the story itself is one of finding choices in a world which takes them away, as the lead character, Gemma, discovers the mother she thought she'd lost might still be alive. I'll say no more, but Gomel has created a world akin to a Jeff VanderMeer novel - that leaves you longing to explore more.

Root Rot, by Fargo Tbakhi, is the opening story in the collection - and a challenging one in that the lead character is so hard to like. He's a screw-up of screw-ups, whose messed up relationships, his life, his associates, and is on a downward spiral of drinking and dying. It's set in a future exploring what might happen to the people of Palestine, and one particular person, who spent his days digging in Martian soil in the hope of making a life with his lover only to end up washed up and paying literally in blood to be able to cross city sections, and trying to pay off the bar bill he's run up beyond his ability to settle. It's a brutal world, with not much in the way of hope. But there's some, and that's something to cling to in order to make up for a legacy of screw-ups. It's no easy tale to read, but then it's no easy life to have lived.

Mr Death made me cry. It's a story by Alix E Harrow about a reaper. Less grim, more respectful. Sam Grayson died in his 40s after losing his own son in an accident. Trouble is, when he died, he found his work wasn't over. He was given the job of junior reaper. And now he has another job to do - overseeing the passing of a two-year-old boy. I was so on edge reading this that I almost didn't dare turn the page. It's not a horror, it's a story of compassion and, well, love. But the imminent nature of this little baby boy's death is so unnerving that you treasure every action, every moment. I'll say no more because it really deserves to be read. But gosh, I salute the author for a truly wonderful tale.

The magazine is worth the purchase price for Alix Harrow's story alone - but there are also stories by PH Lee, Cassandra Khaw, Merc Fenn Wolfmoor, Tonya Liburd, LH Moore, and a festive flash fiction piece by Charles Payseur.

Welcome back, Apex, we sure missed you.

For more about the magazine, check out: https://apex-magazine.com/