It's been, to say the least, a strange year. Between work and supervising the kids as they studied at home, there's been precious little time to sit down and read. Still, to my surprise, I hit my Goodreads reading challenge goal - and there really were some gems that I enjoyed through the year. And goodness knows, if these were able to transport me away from the world of 2020, then they might just bring you joy too. So without further ado, here's five books I loved this year, starting - as it happens - with my latest read. 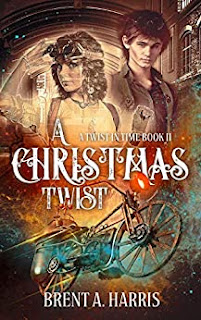 A Christmas Twist, by Brent A Harris
Do you ever read something and think to yourself gosh, I wish I was as clever as this? That's how I felt reading A Christmas Twist. It's a sequel to A Twist In Time, in which Brent A Harris took the character of Oliver Twist and reinvented him as a steampunk hero in his adult years, travelling through time with the aid of a mysterious pocket watch. With this sequel, he bounds into Scrooge territory, as the secrets of the watch and the nature of those ghosts of Christmas past, present and future - time traveller themselves of a fashion - are revealed to be intertwined.
Layer after layer of the story unfolds as Oliver travels through time alongside Scrooge to meet those spirits - discovering alternate forms of Oliver himself, from a suave swordsman to a clockwork cowboy. Whose journey is this? Scrooge's, or Oliver's? And what will it mean for him in the end?
At every turn, just when you think you know where things are going, things take another... well, Twist. Then it all comes together at the end so neatly and delicately it seems like a finely-honed watch mechanism. Perhaps that one in Oliver's hand, tick-tick-ticking time away.
There are surprises, there are punch-the-air moments, and there is a reminder, in this year of all years, that while we cannot control all things in our world, we must never stop trying to find the best outcome.
AI Rating: 5/5
A Christmas Twist is available on Amazon 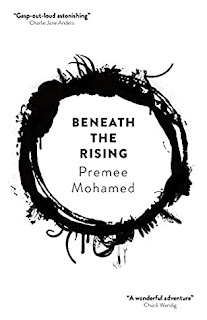 Beneath The Rising, by Premee Mohamed
Who knew Lovecraftian horror could be such a joy?

Premee Mohamed has gleefully snatched up two fistfuls of Cthulhu Mythos, dropped it into the modern day and proceeded to ruin the lives of her two lead characters with it. Possibly while giggling manically.

But while she creates a canvas from that mythos, it's the story of those characters that will draw you in. Johnny and Nick are two survivors of a childhood tragedy that bound them together. Johnny is the superstar, a genius inventor with money and talent. Nick is her devoted friend, trailing in her wake, struggling to manage work shifts and helping his family while she soars ahead like a shooting star.

Things change, though, when Johnny needs help. A door has opened, and she might be to blame, and things that should not be are creeping through it.

The real delight of this book is the relationship between the two lead characters. Johnny is a star, and Nick is locked in her orbit, drawn to her and in love with her in so many ways, but more than that a friend. The two have their shorthand ways of talking, the banter that goes with people who have been friends forever, even as they struggle to deal with things at the heart of their relationship that they cannot tell one another. They are broken in so many ways, and lean on one another to get through because trying to fix things would hurt even more.

All this continues as the world starts to unravel - and it turns out that two people who have nothing in the world except one another might be the world's only hope for survival. There are secrets revealed, bad bargains, and the kind of regrets that leave the taste of ashes in the mouth.

A fantastic book. I heartily recommend it.

Beneath The Rising is available on Amazon 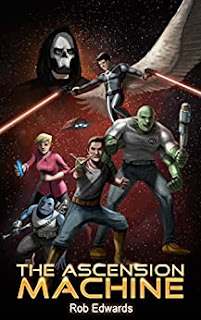 The Ascension Machine, by Rob Edwards
This has been a real joy to read. Take a hero in the vein of Harry Harrison's Stainless Steel Rat, give him a Scooby gang in the vein of Joss Whedon's Buffy or Firefly crews - and give it all a superhero spin.
This is a really fun adventure - starting off with a drifter, thief and misfit who comes to be known as Grey, our hero. He gets a most unusual offer to impersonate a rich man who doesn't want to take up the place at a superhero academy his connected family has arranged for him - and so Grey finds himself heading to a school full of aliens, with only the thinnest of lies to protect him.
All this makes for some soaring space adventure - but there's also a depth here. Grey, a loner for so long, unexpectedly finds friendship. One of the things about the academy is that people find their perfectly ordinary abilities on their own worlds might just make them superheroes elsewhere - even if their ability is as mundane as the ability to be a good farmer. For Grey, he suddenly finds himself unexpectedly with a home - and, perhaps, with the chance to be a hero himself.
Until it all comes crashing down.
By turns witty and thoughtful, Rob Edwards creates a universe that's a delight to visit, and to which I hope we shall return.
AI Rating 5/5

The Ascension Machine is available on Amazon 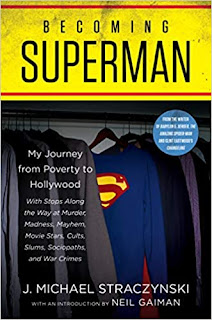