FLASH FICTION: What happened to Ribbons? By Leo McBride

There's a very welcoming Facebook group I'm part of, called Write Askew. You'll find them here. Every now and then, they throw down a writing challenge. In this case, they posted the picture below and urged writers to tell the legend of what happened on this trial. I fired up a reply, and rather than it vanish into the history of Facebook, I thought I'd share it here too. A flash fiction piece, if you will. Enjoy. 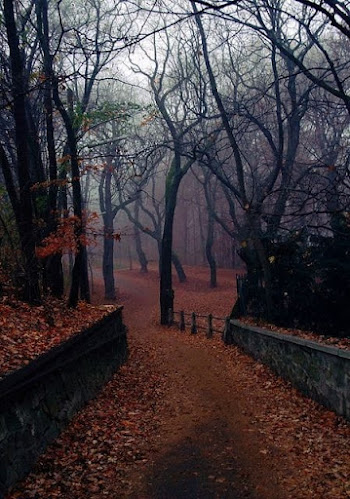 They called her Ribbons. No one remembers what her real name was now, it's so long ago. She was an out-of-towner. Her family came her for the summer, and everyone remembered she always had ribbons in her hair.

When they found her down that trail, the sheriff brought in six boys from the local gang. Each of them swore they had nothing to do with it. The sheriff had nothing and had to let them go. If you caught him drinking down at Old Bill's Lodge, he would tell you he knew they'd done it but there was nothing he could do. Perhaps if he had, he could have changed what was coming.

Everyone called it the Red Fall. At first because the colours of the trees had never seemed so rich. Later, because of what happened.

The first of the boys, young Bill Cheney, was found dead the week the leaves turned. The police tried to keep a lid on things, said there was nothing to worry about, he'd broken his neck in an accident. The Old Bill's regulars said the sheriff was drinking a lot harder from then, though.

It was once a week after that. Bill's brother, Scott, was next. Then the Lansing boy. Then Cheeter Willis. Bobcat Lawrence after that. The last one was the gang leader, Will Farthing.

All accidents? The police couldn't keep that up when the deaths kept happening, but they insisted there were no wounds to be found. Even brought in an out-of-town coroner but the outcome was all hush-hush.

I cornered the sheriff one night at Old Bill's years later, when he was six bourbons to the wind and whispered to him, "What really happened, sheriff? What did the coroner find when he opened them up?"

"They were all through 'em," he said. "All their insides jammed up with 'em. Couldn't breathe. Suffocated on 'em."

He looked me dead in the eye and said one word, and I swear to you now I don't know if he was drunk, or mad, or the coldest sober I've ever seen him.