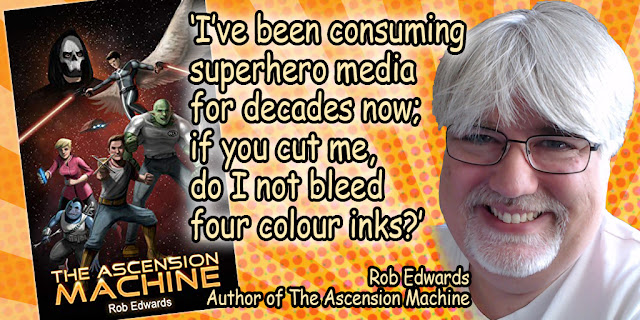 I'd like to welcome Rob Edwards back to the blog - and this is a very, very special occasion. Let me throw a couple more verys on that too. Rob's debut novel publishes in the coming week - The Ascension Machine. It's a novel of heroes. More to the point, superheroes. So I'm delighted he's here to talk about it.

Hi Rob, and congratulations on your debut novel! We’ll get to the meat of the book soon – but we know it’s got science fiction, aliens and most importantly superheroes! So, let’s start with caped crusaders – what’s your first love when it comes to comic books and what is it that hooked you about those characters?

The first comic book I remember reading was issue two of the comic adaptation of the very first Star Wars movie. My dad thought these silly space comics (this was before Star Wars was, you know, Star Wars) were missing the point, so he bought me the latest Green Lantern and Justice League of America to show me what comic books should really be like. Now I think, this blend of sci fi and superheroes has been with me a long time now.

You and I got to know each other across the gaming table playing Heroclix – that’s a superhero tabletop strategy game for those who don’t know – but what was your favourite team you used to play?

With so many miniatures to play with (so very very many), I tried to vary my teams as much as possible, playing Marvel teams, DC teams, Lord of the Rings teams and Star Trek teams pretty regularly (and mixing it up to enjoy things like Gandalf driving the Batmobile). But eventually I’d always come back to Legion of Superheroes or Birds of Prey. 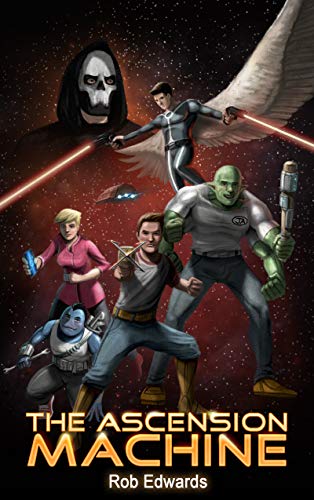 I think I need pictures of Gandalf driving the Batmobile! OK, so tell us a little about the novel – what was the hook that drew you into writing about superheroes?

They do say “write what you know”! I’ve been consuming superhero media for decades now; if you cut me, do I not bleed four colour inks? The kernel of this story, though, comes from a question of identity. Everyone in the book is going through some kind of identity adjustment, either because they’re trying to get out from their parents’ influence, or habitually lying about who they are, or they are superheroes, for whom the secret identity thing is baked into the concept.

It’s set in an academy for superheroes – where did your inspiration come from there?

It was a function of the theme, really. For many, college is where they begin to find out the kind of people they will be as adults. It’s all back to that question of identity. The working title of the book was “So you want to be a space alien superhero?”, I changed it for several reasons, but it’s still the core of what the academy is about.

Plus, I just loved the idea of taking some of the sillier elements of the superhero genre and making them into college courses. If you want to study Grapnel Gun Maintenance, Costume Design and Rescueology, the Justice Academy is the place for it.

Tell us about Grey, your hero – a person out of place, it must be said, living a bit of a fraud!

At the start of the book he would (and does!) tell you that he has an awesome life, drifting from one space station to another, seeing the whole galaxy, earning his way with odd jobs, petty crime and grifting. He gets into a lot of trouble and has a knack for lying. But he has nothing to ground him. At seventeen he has no friends, no past, no future. He’s a little lost and doesn’t realise it until chance (and a scam) find him enrolled at the Academy under false pretenses. 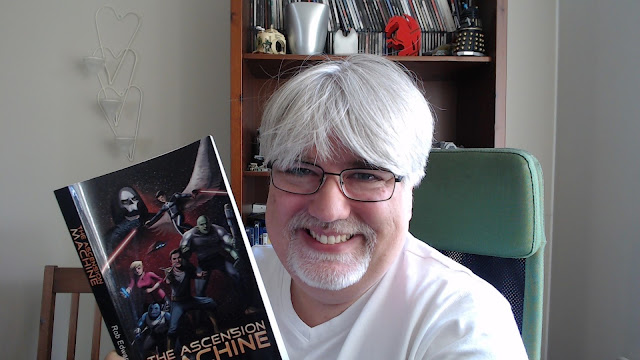 The book reminds me a bit of Harry Harrison – but what would you say your influences are?

I’ve not read any Harrison since I was a teenager, but yes, I see the comparison to the Stainless Steel Rat. I wrote a post on Altered Instinct a few years ago about the books I carry with me, and you’ll find most of my influences there! Erik Frank Russell’s Wasp, Bujold’s Vorkosigan books are both in the DNA of The Ascension Machine, stir in a little Dumas, a hint of Rowling and top it off with some great comic book storytellers like Keith Giffen, Gail Simone and Mark Waid.

The artwork for the cover is fab – was that a custom commission?

It’s the work of the talented Ian Bristow, a scifi writer in his own right. I love what he did with the cover, and he was very professional when it came to handling my fussy last-minute changes.

What was your favourite part of the writing? (Without too many spoilers!)

Dialogue always flows the easiest for me, so my favourite part is the banter between Grey and the people he meets and friends he makes. I particularly enjoy writing for the characters Seventhirtyfour and Gadget Dude.

You’ve published quite a few short stories, but this is your first full-length novel, how did you find the difference in the different formats as a writer?

What I found with novels, I mean the essential difference in my approach, is that when writing novels you have to come up with so many more words. The biggest issue, aside from that, is that for most short stories I can keep it all in my head. I know what I’m doing and where I’m going, and consistency flows from that, but I couldn’t do that with the novel, so I had to be a little more rigorous with note taking so that Seventhirtyfour’s height didn’t change, for example.

What’s cooking next in your literary kitchen?

No rest for the wicked, I’ve gone straight on to the sequel for The Ascension Machine. This book will be called The Crossover Paradox and Grey and his friends must deal with the changes that happened in the first book, plus a murder on campus.

All the usual places. Amazon, Barnes and Noble and the like. Kindle and paperback.

Traditional last question here – what are you reading at the moment, and what’s your favourite book you’ve read in the past year?

I’ve just started on Brandon Sanderson’s Skyward. I’ve not read any of his stuff before, other than when he stepped in to help with the end of The Wheel of Time, but I know he has quite a following. Looking forwards to finding out if he lives up to the hype. 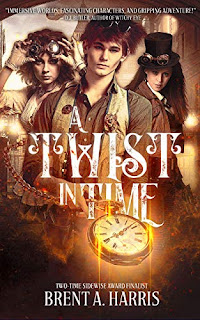 What have I read this year? I confess that the whole lockdown thing, I’ve found it difficult to sit and read during it, I’ve not read half as much as normal (not helped by needing new reading glasses since before the lockdown started! I’ve actually managed to get a new pair now, so that will help). Oh, of course, I must mention Brent’s A Twist in Time, steampunk meets Dickens, and with a hint of the superhero to it too.  And of course, Tales from the Pirate’s Cove, Inklings Press’s latest. Seems a bit self-indulgent, but eleven of the stories in there aren’t mine, so I don’t feel bad about plugging it.

Thank you very much for calling by, Rob. I'm looking forward to reading the book. It's pre-ordered, so that'll be my reading for the week ahead! Good luck with the launch!

• Pick up The Ascension Machine at mybook.to/ascensionmachine 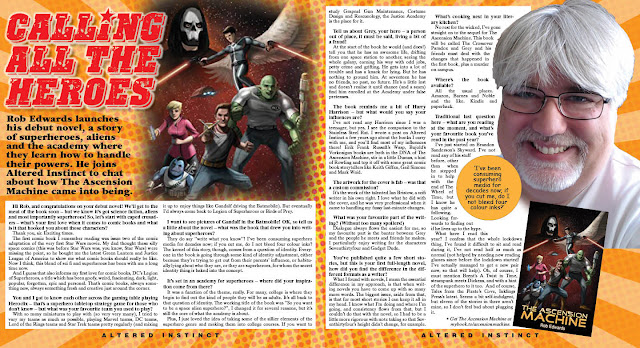