After all, who doesn't love pirates? Especially sea monsters. They loooove pirates. Crunchy but good.

Tales from the Pirate's Cove is the new anthology from Inklings Press - and I've got a story in it. First stop, look at that lovely cover, designed by the fabulous Ricardo Victoria. 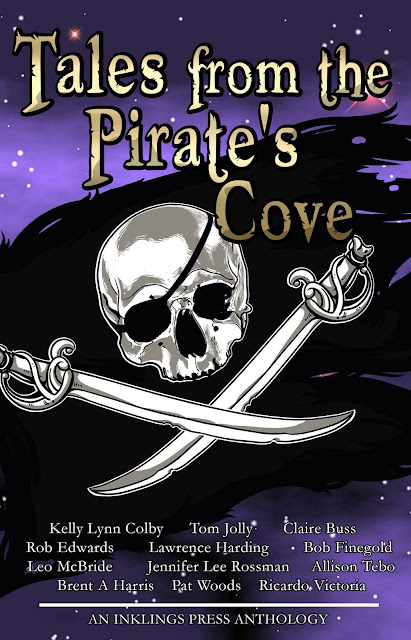 Ooooh, shiny.
My story for the anthology started to come into being when I was a kid. The challenge to come up with a pirate story was fairly straightforward. Any variety of pirate would be acceptable. The anthology has space pirates, time pirates and more, but for my story, one particular influence came to mind.
As a kid, I used to devour the contents of the library. I would take them home, gobble them up and spend my time reliving in my head what had happened in the book. One of those books was a short story collection from Robert E Howard, of Conan fame. But it wasn't Conan that lived on in my mind, but a story called The Temple of Abomination, in which Cormac Mac Art and a band of Vikings (Celt hero and Vikings side by side being natural companions of course) came to a temple on an island filled with lizardmen. Battle ensued in classic Howard fashion.
When I came to consider my pirate story, that lingering memory from when I was a kid stuck in my head. If you're a pirate out to sea, there's no one else to rely on. No one will come to your aid. Even if they did, they'd be as likely to clap you into chains as rescue you. And so I thought about that island of Howard's, and began to come up with my own impossible island, with an impossible threat, greater than a humble crew of pirates could deal with...
It's set in the part of the world I live in these days, with references to Nassau and the Bermuda Triangle, and drawing on some of the reality of the era of pirates. 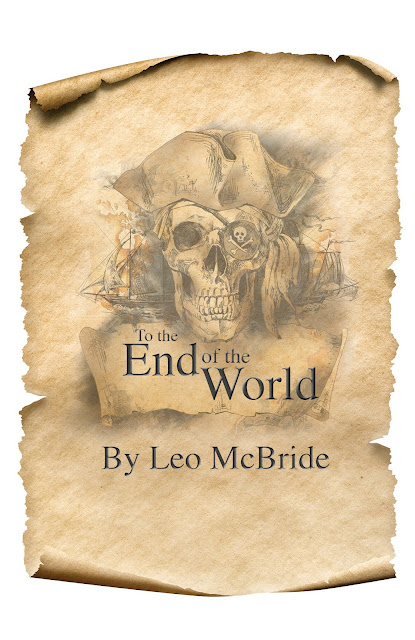 To the End of the World is a doomed romance, a cosmic horror, a journey towards a destination that should not be. And it's out now in Tales from the Pirate's Cove alongside 11 other stories that are far better than mine.

I shouldn't play favourites because I love them all, but if there were two that spoke to me particularly, it would be Jennifer Lee Rossman's queer story of a time pirate investigating who stole 1998, chock full of references to bands, games and trivia of the era, and Lawrence Harding's story of a romance between a captain and the fey being that powers his ship, a delicate and thoughtful story exploring the bonds between the families we come from and the families we make, alongside gender identity issues that I'm far from qualified to talk about, but which make me think.

This is the ninth anthology from Inklings Press - and it's full of fun, capers, horror, sci-fi action and more. I do hope you'll give it a try. It's available as an ebook and in paperback - and you can find both at mybook.to/piratecove
Set sail with us, me hearties. We'd love to have you on the journey. 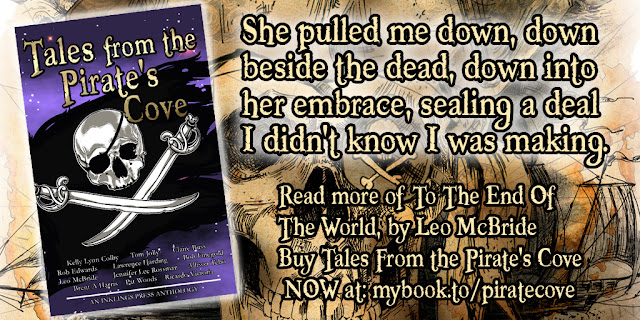 PS After the book launched, I thought to myself I'd take a trip down memory lane and re-read that Howard collection - only to find it on Amazon for $830. If nothing else, I can promise our anthology is vastly cheaper!
Posted by Leo McBride at 21:08

Email ThisBlogThis!Share to TwitterShare to FacebookShare to Pinterest
Labels: Leo McBride, Tales from the Pirate's Cove