BOOK REVIEW: Beneath The Rising, by Premee Mohamed; A Twist in Time, by Brent A Harris; Oware Mosaic, by Nzondi 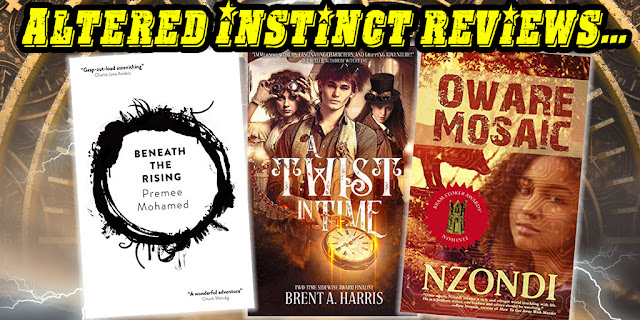 Tentacles, time travel and afrofuturism have been on my reading list lately. Check out my latest reviews below. And hey, what have you been reading lately that you've enjoyed? Drop a note in the comments. 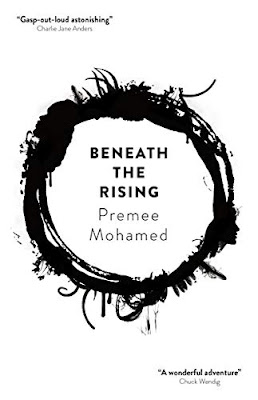 Beneath The Rising, by Premee Mohamed

Who knew Lovecraftian horror could be such a joy?

Premee Mohamed has gleefully snatched up two fistfuls of Cthulhu Mythos, dropped it into the modern day and proceeded to ruin the lives of her two lead characters with it. Possibly while giggling manically.

But while she creates a canvas from that mythos, it's the story of those characters that will draw you in. Johnny and Nick are two survivors of a childhood tragedy that bound them together. Johnny is the superstar, a genius inventor with money and talent. Nick is her devoted friend, trailing in her wake, struggling to manage work shifts and helping his family while she soars ahead like a shooting star.

Things change, though, when Johnny needs help. A door has opened, and she might be to blame, and things that should not be are creeping through it.

The real delight of this book is the relationship between the two lead characters. Johnny is a star, and Nick is locked in her orbit, drawn to her and in love with her in so many ways, but more than that a friend. The two have their shorthand ways of talking, the banter that goes with people who have been friends forever, even as they struggle to deal with things at the heart of their relationship that they cannot tell one another. They are broken in so many ways, and lean on one another to get through because trying to fix things would hurt even more.

All this continues as the world starts to unravel - and it turns out that two people who have nothing in the world except one another might be the world's only hope for survival. There are secrets revealed, bad bargains, and the kind of regrets that leave the taste of ashes in the mouth.

A fantastic book. I heartily recommend it.

Beneath The Rising is available on Amazon. 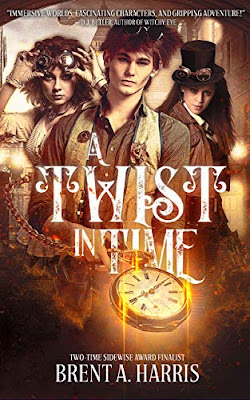 A Twist in Time, by Brent A Harris

Sometimes you read a story and you think how on Earth did no one thing of doing this before? With A Twist In Time, Brent A Harris delivers a book I can only wish I could have thought of.

You know Oliver Twist. Yes, that one. The orphan. That young chap that Dickens created, the one that said in the musical "Please, sir, can I have some more?"

Well, Brent Harris gives him more. And then some. A Twist in Time tells the story of a grown-up Oliver, the orphan made good, one who looks out for the children that tread the same path he did.

When some of those orphans start disappearing, Oliver sets out to save them, aided by Nell Trent and a host of steampunk-style gadgets. Most fascinating of all is the pocket watch he can use to turn back time, giving him a second chance when he needs it most.

Facing a gender-flipped Artful Dodger, Oliver begins to unravel the mystery of the disappearing children - uncovering a threat that is far bigger than he could have imagined.

This is rollicking fun as a book, and it really zips by. Taking the Victoriana element of steampunk and welding it onto the world of Oliver Twist is a genius move, and taking the frail scrap that was Oliver and turning him into the forged steel of his adult self hits the mark perfectly.

I really enjoyed this - and it's set up nicely for future stories in this same world. Delightful.

A Twist In Time is available on Amazon. 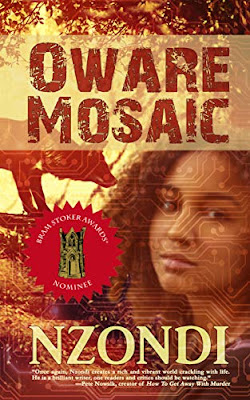 Oware Mosaic, by Nzondi
This is the winner of the 2019 Bram Stoker Award for a YA novel - which is how I heard of it.
It's a slice of afrofuturism set in Ghana, and... well, let's just say there's a lot packed in here.
There's been a nuclear war, the characters in the novel are dealing with the aftermath, scientists have found a way to store consciousness on data orbs, some people have been affected by radiation and turned into vampire-like creatures, there are vicious dog creatures to beware of... oh, and there's a virtual reality construct called the House of Oware that people spend their time hanging out in.
Against that background, the story tells of a young woman, Feeni Xo, who thinks she may have killed someone in a hit and run. As she spends time in the virtual reality afterwards, a friend helps her realise that more is at play and there may have been a murder instead. As the pieces of the puzzle start to drop into place, society itself turns out to be at risk.
I really wanted to like this book. There are lots of great touches, such as the family gatherings which feel to me really authentic for the setting. Unfortunately, these tend to get used for a whole lot of infodumping about the world or clumsy ways of pointing out who the bad guys are.
Add to that there just being too much stuffed into the story that is irrelevant to the plot - and plot developments suddenly bursting into the story without any real build-up, and it just doesn't hang together.
Great setting, interesting premise, but a fine example of why less is sometimes more.
AI Rating: 2/5
Oware Mosaic is available on Amazon
Posted by Leo McBride at 10:35