When Hurricane Isaias came to call 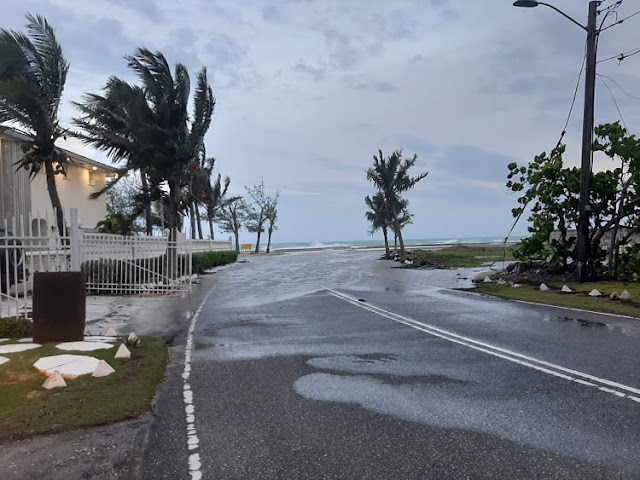 A hurricane blew through here today. Hurricane Isaias was an unwelcome visitor to The Bahamas, but in he came anyway. He passed right on through and out the other side. A nuisance it seems, more than anything else, knocking over a couple of trees here and there, and causing flooding in some areas. Family and friends are safe.
If you’ve never been in a hurricane, it’s a strange experience. The shutters go up ahead of its arrival, leaving you closed in a claustrophobic world of premature darkness. The shutters close out the light as well as fending off debris, so at best you have a half-light, and when night comes, and the power inevitably goes out, you’re left in pitch darkness except for the little pools of light from your lamps.
The major winds from Isaias came in the night, and we slept through them rather than peering out at the swaying trees and the lashing rain. Isaias was mild compared to some, but there’s always some nerves when a hurricane comes. Even the family dog felt the nerves, howling for some company at 2am.
In the aftermath, there were a couple of trees down in the yard. On the streets, the areas that tend to flood did so. Out to sea, the waves swelled like wild animals asserting their dominance.
Further afield, there were some strange effects. Fish practically leaping out of the sea at Inagua, giving fishermen an unexpected bounty.
I write this as the all clear has been given. The power is out, so we sit in darkness. The kids are playing on their electronic devices, watching YouTube and blissfully unconcerned by the storm that has passed. There’s an unusual feeling in seeing everyone happy after the storm – a mix of contentedness, pride that you saw everyone through with no harm, and something else. You realise your hands were clenched a little tighter. You realise you can let go of that mental list of what to do if you need to evacuate. You realise that your job is done, and you can relax at last.
Time to pour a rum. Be safe, everyone.