Meet the Author: Aaron Emmel, author of Portal of Life and featured in Tales of Magic & Destiny

Aaron Emmel is one of the authors alongside me in the new Tales of Magic & Destiny anthology - and he stopped by the blog to chat about that and his other work. I really enjoyed his story in the anthology - A Sword of Bone - most of all because of the worldbuilding he puts into it. It really feels like another world, as good fantasy tales should, I reckon. More than that, his lead character slots right into the world that Aaron built, and his decisions and the consequences he faces because of that flow right out of that background. But hey, don't let me blather on - this post is all about Aaron, so let's let him take it away. 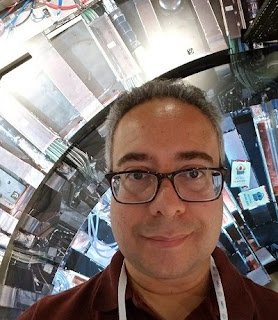 Aaron Emmel, pictured at CERN. I may be jealous.

Hi Aaron, and welcome to the blog. I really loved your story in Tales of Magic & Destiny. The setting for A Sword of Bone feels bigger than the boundaries of the short story - is this a setting you've explored previously or that you plan to explore further? How did you approach creating the cultural setting?

Yes, and in fact two other stories set in the same world came out earlier this year, in SERIAL Magazine and Æther/Ichor. They both take place at around the same time as the events in “Sword of Bone,” but they’re not directly related. Two previous stories, including one published not long ago in sub-Q Magazine, are set on a different continent and about 1,200 years earlier.

That long fictional timeline probably gives away the fact that I’m interested in how cultures evolve, including how they respond to new ideas and technologies and share them with each other.

The world of “Sword of Bone” was formed by the humans’ ancient enemies, the Dae, which gave my worldbuilding a Gnostic influence. The Dae’s power was stronger at certain times and seasons, which made early tribes particularly sensitive to annual cycles and gave the farmers who understood them an inordinate political role that’s still evident in “Sword of Bone.”  They created a mathematics-based religion that defines their descendants’ system of magic and the way they view their world.

My approach involves a lot of having fun and seeing what happens, plus a whole lot of research, which I’m always happy to talk about but which I hope no one notices when they read the story. 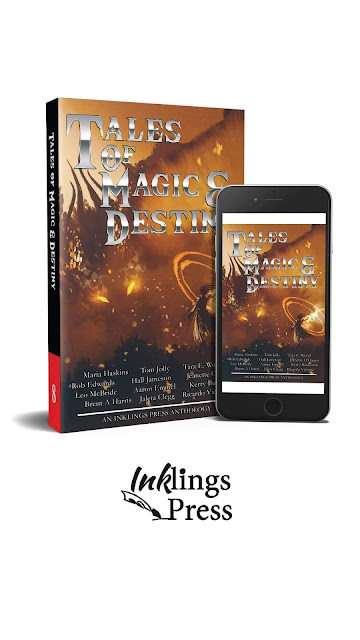 I liked the feel of the military tactics and battle in the story - is there something of the wargamer in you that comes out in such scenes?

Thanks! Yes, that was definitely me letting out my wargamer side. Most of the tactics were actually used in historical battles. My graduate degree is in international security, and I took a lot of notes in my military strategy and history classes because I knew my stories would put them to good use. 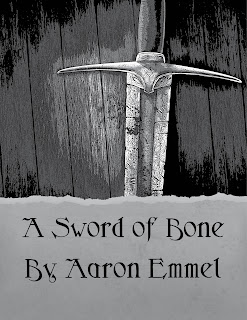 Tell us a little about your most recent book – what is it called, and what is it about? Give us your elevator pitch to make us fall in love with it!
Portal of Life is the final volume of the Midnight Legion gamebook trilogy, set on a ruined Earth about five hundred years from now. You’re one of the last two agents of a clandestine group meant to preserve human civilization, but the other agent has betrayed you and is about to use ancient weapons to finish the job of wiping out all remaining life—unless you can stop her first, of course. 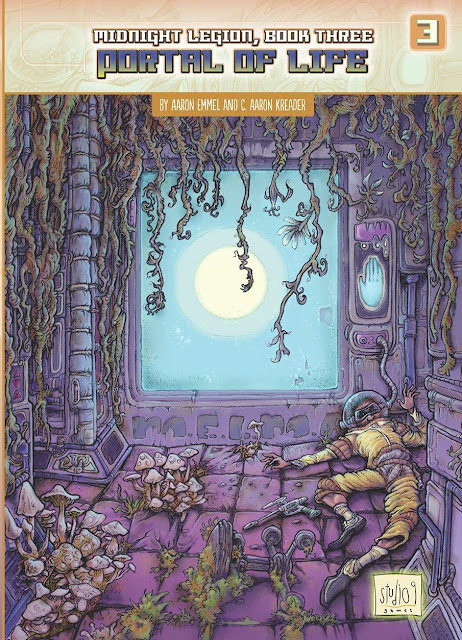 I wanted to write a gamebook, and I thought it would be fun to work again with C. Aaron Kreader, an artist and designer I’d already had a successful collaboration with. I came with a pitch for an entirely different story, a sword and sorcery mystery. But I let A. Kreader present his idea first, and I liked it so much that I immediately started brainstorming with him and never got around to the idea I’d come with.

I must admit, I love the art! It reminds me of things like Paranoia and Harry Harrison books, with a bit of grim humour in there! Without spoilers, what was one of your favourite moments of the story to write? What was it that made you enjoy that section so much?

There’s a confrontation that’s set up throughout the three books and finally happens at the climax. It was fun to write, because it’s a payoff I’d been waiting for so long to get to, but also because it retroactively puts everything that came before it in a different light. The journey you think you’re on actually ends up somewhere else.

My favorite is a character from a story that I haven’t finished. He’s from the world of “Sword of Bone.” He’s the main villain of this millennia-and-a-half-old civilization. His name has become a curse. He betrayed the human race. And when I finally got around to writing his story, I was like, “Oh, he was right all along. It was his family that misunderstood what he was trying to do and screwed everything up. He should have been recognized as the hero.”

You'll have to tell us when it's finished! What has been your biggest challenge as a writer? What hurdles have you had to overcome, and what helped you to do so?

Right now, my biggest challenge is time. I have a wife and two little kids, so there are LEGO bases that need to get built. In terms of craft, I get carried away with backstory, and it took me a long time to figure out how to just focus on the story at hand. The best antidotes to that were learning more about story structure, and also just writing a lot, so that I can get all the tangential plots and lengthy descriptions out of my system.

I hear that with time! Like you, I have a wife and two kids and getting that balance is a constant juggle! What’s the most fun piece of technology/magic that you’ve included in your novel that you wish you had in real life?

Some bioengineers find a way to distribute intelligence across an ecosystem of plants and fungi so that they can communicate with humans.

Every time I get a new idea and I start writing, and it seems like it might actually work. It feels like a miracle every time. And every time any of my stories gets published. For about five minutes, until I come up with my next idea.
Are your books available in audio format? How have you found the process of transforming it from the written page?

The gamebooks aren’t available in audio, but I enjoy exploring stories through different media. In addition to being narratively interactive, the gamebooks contain visual puzzles. I also love writing plays, comics and graphic novels.
Several of my stories are available in audio format, and one of them, A Small Price to Pay, has two different audio versions, in Starship Sofa and Planet Scumm. I can’t say I’ve contributed much to the process, but I love hearing a talented voice actor put their own spin on something that started off just in my own mind.

I just started Tana French’s The Trespasser.  I’ve read a lot of great books over the past year, but Moonglow by Michael Chabon gets top billing. Chabon breaks some basic law of novel writing in each of his books, and I assume he does it to challenge himself, but somehow it just makes his prose even more amazing. If I can expand my answer a bit, the science fiction and fantasy that’ve blown me away most recently (not necessarily in the past year) are Jemisin’s Broken Earth series, Stephenson’s Seveneves (another book that blatantly ignores basic fiction writing rules), Bacigalupi’s The Water Knife, and Liu’s collection The Paper Menagerie.