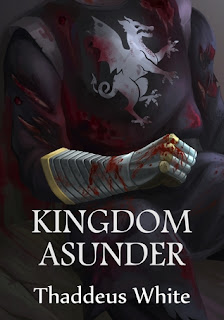 Earlier this year, I reviewed The Adventures of Sir Edric (Volume One) by Thaddeus White. It was an enjoyable ride - though there were elements I wasn't keen on. I particularly hoped for a tighter plot and a better time for the female characters. Well, step forward Kingdom Asunder.
This is book one of the Bloody Crown trilogy, a tale of treachery and political rivalries in a fantasy kingdom where magic is a tool wielded by he who has most power, and strange beings lurk ready to wreak havoc when human knights are busy waging war upon one another.
The story gallivants all around the different factions, but the strongest characters that we keep returning to are Princess Karena, who steps up her machinations when her brother, the King, is grievously wounded, kickstarting the political upheaval as rivals seek to claim the crown; the manipulative Charlotte, who appears to be choosing her own side while letting others think she is on theirs; and the hapless hostage Sophie, held against her will as a bargaining chip in the war.
Each is an intriguing character, but Karena shines, a woman who uses those around her to suit her needs in the bedchamber or the battlefield, while her giant cat Golhenga prowls around with a snarl and willingness to protest its mistress with tooth and claw.
I'd say maybe there's a few too many characters that we spend time with, some fleetingly, but this is a heady brew of political intrigue, in which those most suited to the crown are often denied, be it by bloodshed or biology. Karena is a warrior queen in all but the rules of patriarchal lineage.
It's hard to judge some of the elements in the first book of a series - as you don't know how parts given small play here will turn out in two books' time - but magic feels like a peripheral part of the universe here except when it comes to its use for healing wounds, or for the denial of healing as part of the plotters' bid to usurp the king. The supernatural beings too seem like a minor presence, although one that schemers again put to use for their ends.
In short, intrigue is at the heart of this story and intriguing it certainly is. I really enjoyed reading this, and I salute the writer!