BOOK REVIEW: The Adventures of Sir Edric Volume One, by Thaddeus White 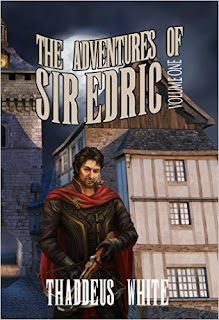 The Adventures of Sir Edric Volume One
by Thaddeus White

FLASHMAN. Blackadder. The Stainless Steel Rat. Soltan Gris. Nary a hero worth the name among them. Cowards and scoundrels all.

There's something appealing about rooting for a hero you would want quickly locked away in real life – and Sir Edric is as worthy of a good set of irons as any you might meet.

When first we encounter him, he is in flagrante dilicto with his King's wife – and from there on, we follow the adventures of a man whose two loves are gold and sex, or any opportunity to pursue either.

The book is neatly divided into two distinct adventures – though really the end goal hardly matters in either, as really each is only a maguffin to lead Sir Edric along as he tries to bed a variety of women along his path, from sorcerous elves to lusty librarians, naughty soldiers or pretty much any woman but Sir Edric's dreaded wife.

The hazards along the way are seldom too threatening, with Sir Edric quickly making his escape from the litany of dangers with a bound and away, most of the work being carried out by his faithful dogsbody... Dog, his henchman, who frankly is far more accomplished than his superior.

There are some genius one-liners in here – and chortlesome moments such as Edric's pratfall over the dead body of an invisible assassin.

I found the dangers he faced along the way too slight, however – almost as if some of them were rustled up with a Dungeons and Dragons random encounter table. At one point, he bumps into a local hunter and his wife and daughter seemingly for no reason other than to provide him some necessary bandages and badinage about backwoods life.

The women of the book fare poorly, too, in large part being treated as little more than objects of Edric's lust – though the odd one resists his dubious charms.

For me, the book ends up being too much of a series of events rather than a coherent plot – things happen because the story needs things to happen rather than as a consequence of earlier events.

There remains promise in here, but a tighter plot and a better treatment of female characters would add shine to the zing that helps the pages zip by.

The Adventures of Sir Edric Volume One is available on Amazon.