Meet the Author: Matthew Kresal, author of Our Man On The Hill and Sidewise Award winner Moonshot

Matthew Kresal is a writer, critic, and podcaster with many and varying interests. He’s written about and discussed topics as wide-ranging as the BBC’s Doctor Who, Cold War fact and fiction, and the UFO phenomenon. He has appeared on podcasts including Spybrary, Dead Hand Radio, The 20mb Doctor Who Podcast, and The Saucer Life. His prose includes the non-fiction The Silver Archive: Dark Skies from Obverse Press and short fiction including The Aurora Affair in Belanger Books’ A Tribute to H.G. Wells and The Light of a Thousand Suns in in D&T Publishing’s After the Kool-Aid is Gone. He was born, raised, and lives in North Alabama where he never developed a southern accent. 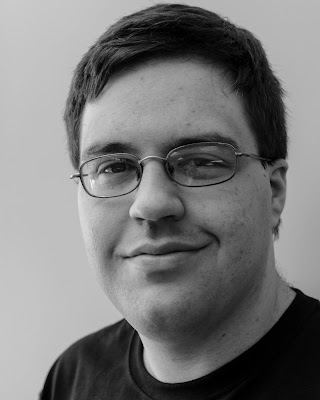 Hi there, and welcome to Altered Instinct! Tell us a little about your most recent book – what is it called, and what is it about?
It’s called Our Man on the Hill and the elevator pitch is “what if Senator Joe McCarthy, the Cold War’s most infamous hunter of ‘Reds under the bed,’ was really working for the Soviets all along?”
What inspired the story?
I’ve long had an interest in the Cold War and espionage. A few years back my interest was rekindled by a podcast called Spybrary, started by Shane Whaley, which I’ve been lucky enough to be on a few times. Part of that rekindling led to my picking up a non-fiction work called The Haunted Wood. Published in the late nineties when the old Soviet archives were briefly opened up, it contained some fascinating stories of Americans who spied for the Soviets during the 1930s and the World War II years. Reading how it ended, and how little McCarthy really picked up on, was an eye opener. Then I came across somewhere a great quote from President Harry Truman about McCarthy that called the senator “The greatest asset the Kremlin has,” or words to that effect. My mind was off to the races, since “asset” is an intelligence phrase for agent (though I’m certain that’s not what Truman meant when he said it!). 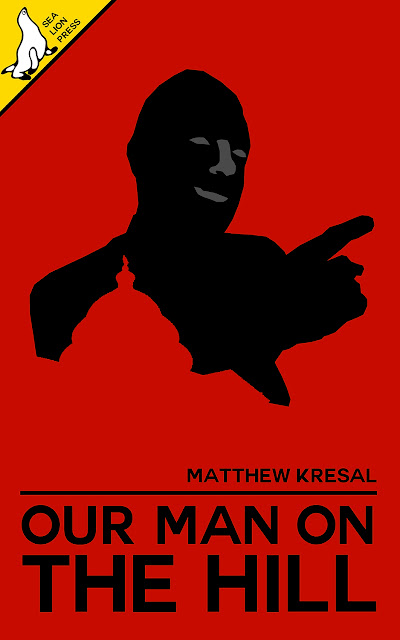 Without spoilers, what was one of your favourite moments of the story to write? What was it that made you enjoy that section so much?
There’s a confrontation between McCarthy and then Presidential candidate Eisenhower that I got to write. It was a scene based on a real meeting between the two men where we know how things were said but not what was said, if that makes sense? I had fun fitting that encounter into the narrative, figuring out what McCarthy and his Russian handlers might have come up with that caused Eisenhower to go from about to publicly criticize McCarthy to sharing a stage with him, exchanging handshakes and getting an endorsement.
What are your favourite genres to read – and what is it about those genres that draws you in?
To risk sounding pretentious, I don’t know that I read genres specifically. I read what interests me, whether it’s science fiction, historical fiction, non-fiction or whatever. My main thing is, if it’s fiction, to tell me a good story. Non-fiction is different as reading tends to be either for research or just out of general interest. That said, I do seem to read a lot of science fiction and thrillers, as well as history, so I guess you can call those favourties.
What were some of your favourite books to read as a child? Which were the first books you remember falling in love with?
Growing up in North Alabama, home to NASA’s Marshall Space Flight Center and the Space & Rocket Center museum (the only place in the world with TWO Saturn V’s, even if one is a replica), I was reading books about space from a very young age. I don’t remember specific titles, I wish I did, but I was a voracious reader from a shockingly young age. The first book I remember falling in love with was Walter Lord’s A Night to Remember on the sinking of the Titanic. I read it in third grade around the same time I got bit by the writing bug, and I can’t help but think there’s got to be a connection there.
Are there any particular themes you address in your story? What issues do you explore, overtly or otherwise?
I don’t know if it’s a theme, as such, but writing alternate history (which Our Man on the Hill fits into, even though it’s a Cold War spy thriller) did allow me to explore some of the real-life history involved. There’s some fascinating stories that came out of the Cold War at large that aren’t as well known as they ought to be. One of the things I hoped to do in writing the novel was to bring some of those stories, and the people behind them, to life.
What has been your most satisfying moment as a writer so far? What made you punch the air?
Oh, it’s got to be when my short story Moonshot (featured in Alternate Australias from Sea Lion Press) was nominated and then won the Sidewise Award. As a teenager getting into alternate history, I remember looking at that list in the mid-2000s and being impressed by what I saw. To now be a name on that list still seems surreal, even with having the plaque on my wall.
Away from books, what are your loves when it comes to TV and movies?
Doctor Who is my great love as a TV series and, in an odd way, I owe my writing career to it as I started out writing reviews of it online. The central idea and character, this figure who travels through time and space in a blue box of all things helping out where they can, is storytelling gold. Before Doctor Who, The West Wing was my favorite series and it still holds a special place in my heart as a series that helped inspire me to be a writer. As an alternate history fan and lifelong space nerd, I’m also loving Apple TV’s For All Mankind with its vision of a space race that never ended.
In terms of movies, The Third Man remains my favorite film, being something that works on so many levels. My tastes in movies, like my reading, are pretty eclectic so the list includes the amazing documentary For All Mankind on the Apollo missions, Oliver Stone’s JFK, and the 1995 film of Richard III starring Ian McKellen. 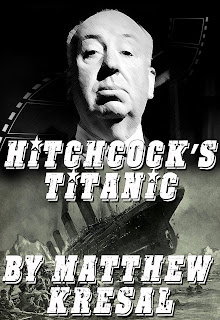 Matthew also appeared in the Tales From Alternate Earths 3 anthology from Inklings Press, with his story about a film version of Titanic made by Alfred Hitchcock.
You get stuck on an island and had only one book packed in your travel bag before the ship went down – what book do you hope you have in there?
It’s almost certainly going to be The Complete Artist’s Way by Julia Cameron, given that it travels with me everywhere. There’s some New Agey woo woo in there, to be sure, but also a lot of practical creative advice. Indeed, I credit the book (and my best friend for giving it to me) for helping me become the writer I’ve become.
Where can readers follow you to find out more about your work?
They can find me on Facebook by searching by name and I’m on Twitter @KresalWrites. I also still have an infrequently updated LiveJournal account at timdalton007.livejournal.com.
A traditional question here at Altered Instinct – what are you reading at present, and what is the best book you’ve read in the past year?
I’m currently reading Do You Dream of Terra-Two? by Temi Oh, which has been intriguing read. I’m also enjoying the audiobook of Survivors by Terry Nation, his part adaptation and part reworking of his 1970s BBC series after writing of the series was taken out of his hands, read by Carolyn Seymour (who was one of the stars of the series).
Best book I’ve read in the past year? Probably Stephen Walker’s Beyond, a non-fiction account of Yuri Gagarin becoming the first human to orbit the Earth. Walker writes with an almost novelistic flair in places and his ability to convey period while also slaying myths is first-rate. A non-fiction thriller, in so many respects. 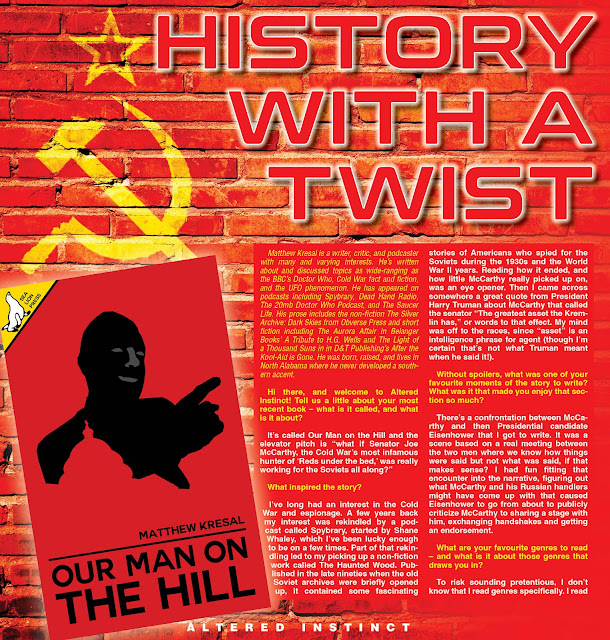 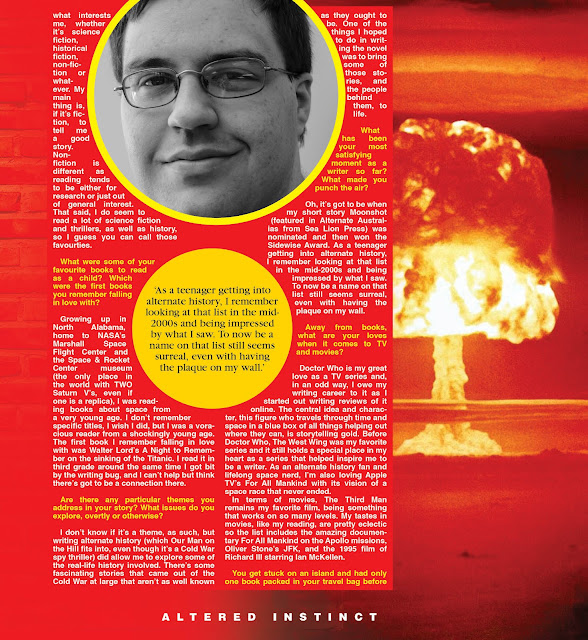 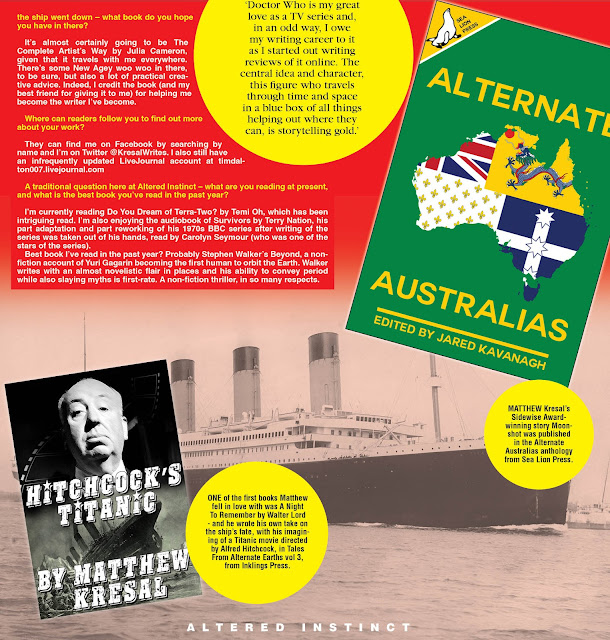