J Dianne Dotson lives in Southern California and dreams of other worlds far beyond. She is the author of the Questrison Saga, as well as boasting a host of other accomplishments - VP of Public Relations for a biotech company, a science writer, content writer, watercolorist and illustrator. She is also a lively presence on Twitter - and she stopped by Altered Instinct to chat about her work. 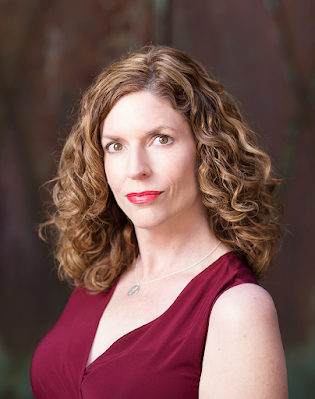 Hi there, and welcome to Altered Instinct! Tell us a little about your most recent book – what is it called, and what is it about?
My most recent book is LUMINIFEROUS: THE QUESTRISON SAGA®: BOOK FOUR:
The stunning conclusion to The Questrison Saga®. Devastation, annihilation, and fear. Leaders sundered and scattered. Decades of control by Paosh Tohon and its Valemog minions have brought the galaxy to the brink of collapse.
Love and war. Spaceships and exotic worlds. Aliens, androids, ecosystems. Mages and presidents. Long cons. Family feuds that led to galactic destruction. Family ties that could save the galaxy.
With heroes destroyed, captured, or missing, Paosh Tohon’s campaign seems unstoppable. Yet one world remains immune: a hidden planet, with defenses both natural and unnatural. The secrets and legacies harbored there protect the last bastions of hope, if they can escape the world and withstand the evils beyond...

What inspired the story?
This is the finale to The Questrison Saga®, which I began writing about 35 years ago off and on. It is a space opera with elements of science fiction and fantasy, and is inspired by my love of both genres, fairy tales, science, mythology, found and made family, and heroism.

Without spoilers, what was one of your favourite moments of the story to write? What was it that made you enjoy that section so much?
Some of the dreamlike setting of the city Allurulla, on the strange planet Quopeia, seems very real to me, as I came up with that setting decades ago. Wrapping up the series was incredibly fun, and it’s hard to pick one favorite. There is an extremely passionate and tender scene; there are homages in the climax to Aliens and The Thing; and there are massive, epic showdowns. It was most satisfying to tie everything together that I had built. 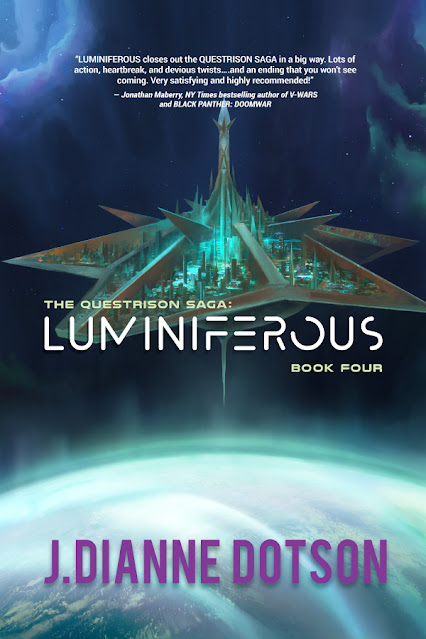 As a writer, have you ever had a character grow to be a much bigger part of the story than you expected? Who was the character and what was it about them that made them emerge from the sidelights?
No, this has not really ever happened. I know my characters going in.
What are your favourite genres to read – and what is it about those genres that draws you in?
Science fiction, fantasy, science, travel, food, history; each offers something different, and I don’t stay reading in one genre for long. I often read several kinds of books at once. I like both fiction and non-fiction, and they all attract me by examining who we are and where we fit in the Universe.
What were some of your favourite books to read as a child? Which were the first books you remember falling in love with?
I loved L. Frank Baum’s original 14 Oz books, particularly. I was fond of classic fairy tales. I enjoyed sci-fi classics like The Martian Chronicles by Ray Bradbury.
Who are your favourite authors to read? And whose writing do you feel has inspired your own work most?
Ray Bradbury and L. Frank Baum are main influences. I read a fair bit of Asimov and Clarke, as well as Anne McCaffrey, L.M. Montgomery’s Anne of Green Gables books, some Stephen King.

Ok, we’re waving the Altered Instinct magic wand. Your story is being turned into a movie – and you get to cast the main roles. Who do you cast for the leading characters? Bonus perk: Who directs?
First, I want no movies. I want TV series. There’s no way that movies could capture what a series could with the story and characters. Actors would be mostly unknowns. I would be very particular, executive producing and having a say on casting. The Russo Brothers would be perfect directors. 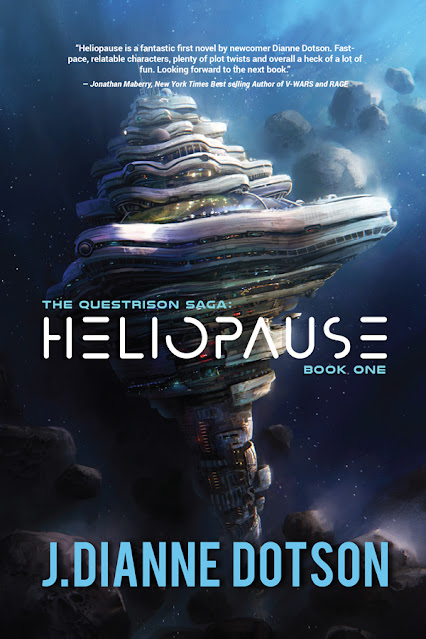 Are there any particular themes you address in your story? What issues do you explore, overtly or otherwise?
I address family, belonging (or lack thereof), betrayal, leadership, and growing up.
What do you like to do when you’re not writing? Tell us about yourself.
I am also a science writer, content manager, artist, and editor. I am also VP of public relations for a biotech company. I have a science background. For hobbies, I like road trips and anything to do with food.
Tell us about your main character. Who is he/she/other and what makes the character special?
In the series, the main character switches from a human man, Forster, in the first book, Heliopause: The Questrison Saga: Book One, to an alien woman who looks human, Galla-Deia, for the rest of the series, starting with Ephemeris: The Questrison Saga: Book Two. Forster was a flawed, disillusioned man in his 40s who felt like he hadn’t got anything right. He’s got latent powers that are triggered by a series of events and people, giving him a chance to have a very different future than he imagined. Galla was sheltered by androids and needs to learn to be more human so she can help protect humanity. Galla is very innocent and slightly feral at first, so she must grow as a person and as a leader to help fight against the malevolent being, Paosh Tohon, and its growing sycophants, Valemog. Galla, in Luminiferous, has undergone a terrible, traumatic event from the prior book, and must heal in order to help save the galaxy. She’s very feisty, with her mercurial hair a weathervane of her emotions, but she is loyal and determined, being both incredibly powerful yet vulnerable at the same time.
What has been your favourite reaction from readers?
That I stuck the landing for the series. It’s universally loved. I love any feedback, and the final book certainly brought out strong emotions from readers. 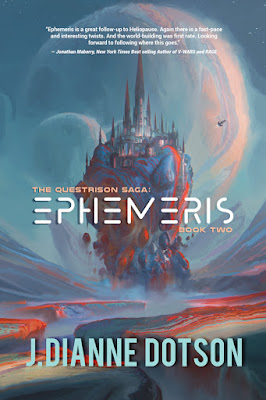 What’s next for you as a writer? What’s cooking in your literary kitchen?
I have several works in progress now. I submitted a short story for an anthology; I’m finishing a near-future sci-fi novella; I’m collaborating with my writer fiancé Gareth L. Powell on another novella; I have middle grade dark fantasy, high fantasy, dark comedy horror, and myriad other novels and novellas in the works. I’m writing short story collections also. I want to make the jump to screenwriting and writing comics also.
What has been your biggest challenge as a writer? What hurdles have you had to overcome, and what helped you to do so?
Find the time to write as a person with several gigs AND teens. I just learned to carve out the time by trial and error to see what worked best for me and my schedule.

What’s the most fun piece of technology/magic that you’ve included in your novel that you wish you had in real life?
I like the ships, the star-cities, the diamethyst crystals and their power, and the extraordinary nature of the planet Quopeia, which might let me in, but I sure wish I could visit it.
What has been your most satisfying moment as a writer so far? What made you punch the air?
Every moment I put words on a page, I feel good about being a writer. Getting this last novel of the series out was the ultimate dream come true, though, and while I will continue writing short stories in that universe, it’s just great to know I made a four-book series and that readers are enjoying it. 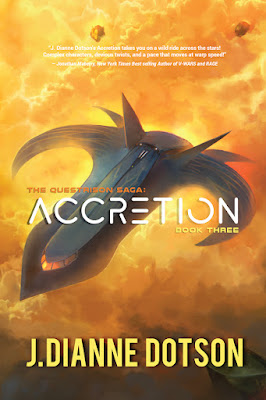 Away from books, what are your loves when it comes to TV and movies?
I love John Carpenter’s The Thing, Alien/Aliens, Blade Runner/Blade Runner 2049, Dark City, The Sound of Music, Star Trek, Doctor Who, Star Wars, Indiana Jones, The Fifth Element, Macross Plus, The X-Files, Farscape, Frasier, Schitt’s Creek…etc.
Are your books available in audio format?
My books are not yet available in audio format as I would have to pay for this out of pocket, but things are afoot, so stay tuned.
Marketing is always a challenge for writers – to share the love, what have you found the most useful tip for spreading the word about books?
Social media presence is essential, and so is fostering an audience by keeping them engaged.
You get stuck on an island and had only one book packed in your travel bag before the ship went down – what book do you hope you have in there?
One big collection of His Dark Materials by Philip Pullman.

I have to ask for readers who might want to know: Is this a kissing book?
There is extreme hotness in some scenes of this book, but the scenes make good sense, as the payoff is extraordinary. Some of the scenes made some readers break into a sweat, no hyperbole.
Where can readers follow you to find out more about your work?
Follow me on Twitter/Instagram/TikTok at @jdiannedotson (remember the two n’s), on Facebook at @jdiannedotsonwriter, and on LinkedIn. Head to my website jdiannedotson.com and sign up for my newsletter.
A traditional question here at Altered Instinct – what are you reading at present, and what is the best book you’ve read in the past year?
Currently, I am reading Fleet of Knives by Gareth L. Powell, Children of Time by Adrian Tchaikovsky, who I am interviewing soon, The Faith Machine by Tone Milazzo, Dead Spots by Melissa F. Olson, Travel Writer’s Field Guide by Phoebe Smith & Daniel Neilson, and Death’s Legacy by Dennis K. Crosby. 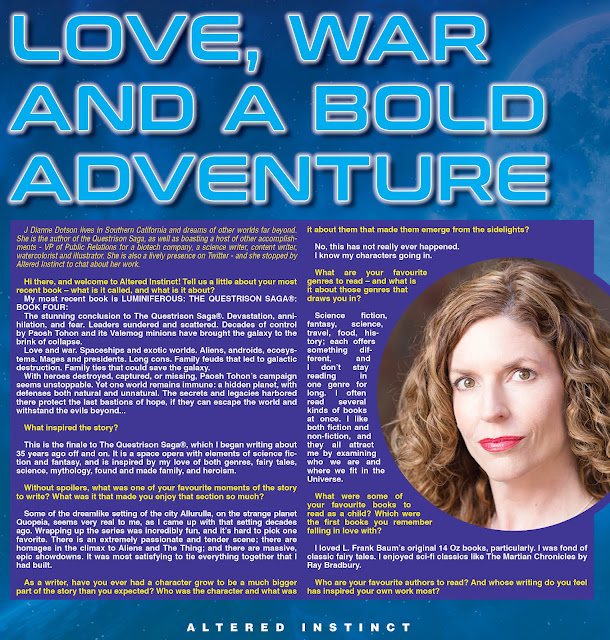 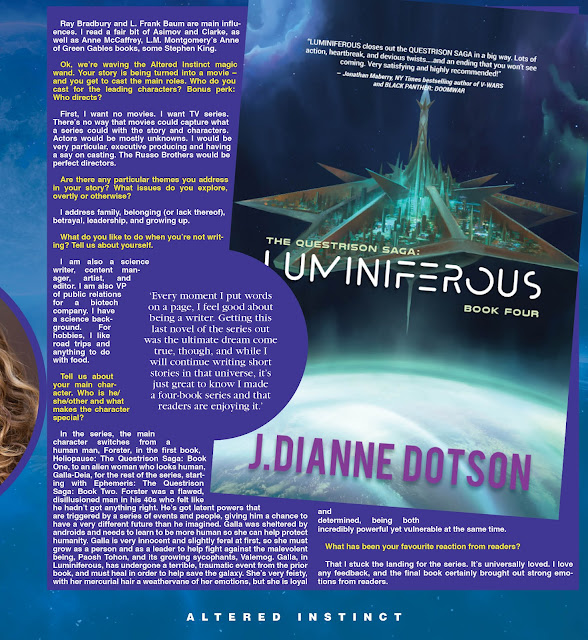 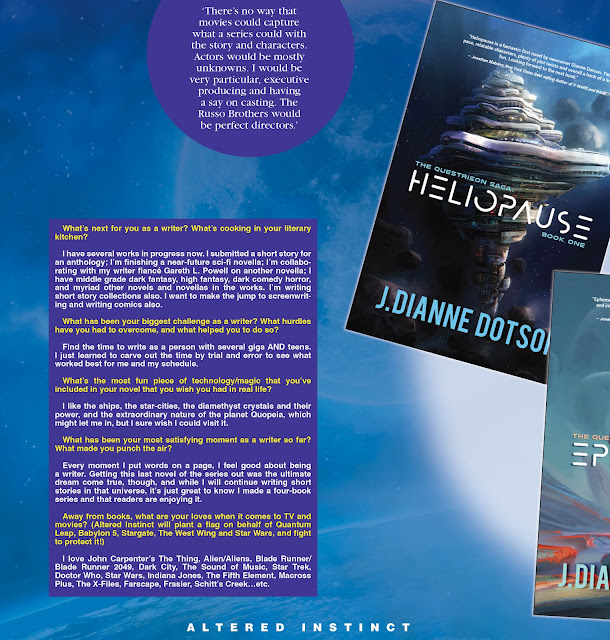 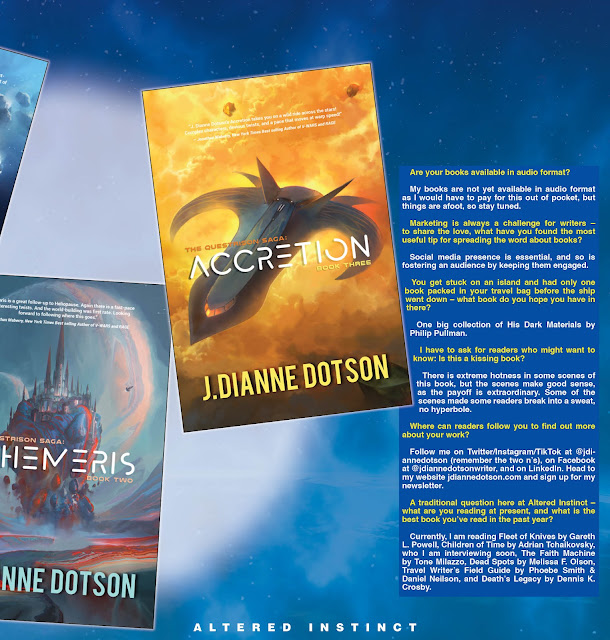 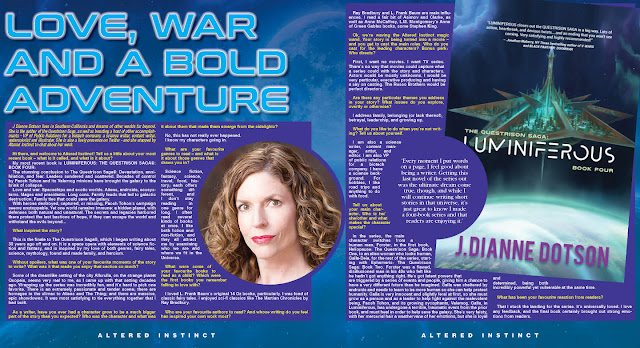 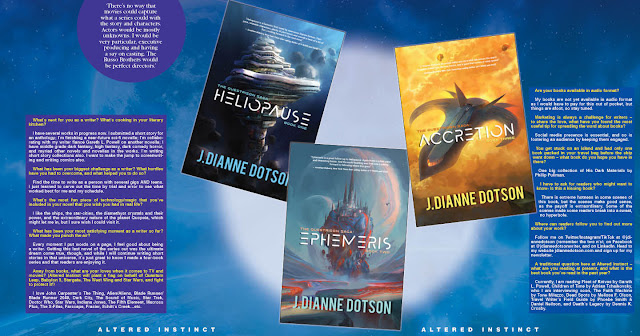