Welcome to the latest round of reviews! And this should be the first of two review write-ups in short order, with the next one being a number of collections and anthologies I've been reading of later. But first, novels! Time to dive into deep space, and worlds of fantasy. First up, I've been watching The Expanse series for a while now - and thought it was about time to try out the books. So without further ado, it's time to wake the leviathan... 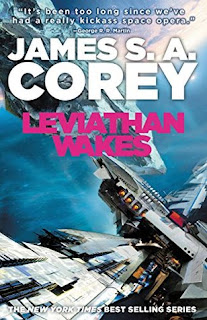 Sometimes you open a book up and you know you're in sure hands right away - and from page one of Leviathan Wakes, you know this is a solid piece of writing.

It starts with horror, as much as anything else, with Julie Mao on board a doomed spaceship trying to find a way to survive, then switches to the two main protagonists as they try to figure out what became of her and the consequences of what happened.

One of those is Jim Holden, a man who has tumbled down the ranks of society to become an officer on board an ice hauler, only to find captaincy thrust upon him in the aftermath of finding a derelict ship. The other is Joe Miller, a detective and drunk treated as a joke by his colleagues and given the job of finding Julie Mao by his boss.

What happens will bring the two together as the solar system spirals to war around them - and at the heart of it all, something is ready to change the universe forever, something alien.

It's interesting to come at this from watching the show to see the differences. One of the best characters from the show, Chrisjen Avasarala, the bull-headed Earth diplomat, is completely absent here, which explains why for much of the first season of the show she was so peripheral to the story. There are other differences too - the character of Shed Garvey, the ship medic of sorts, was fleshed out better in the show, as is the character of Amos Burton, who is a bit one-note in the book but given greater depth in the series thanks to the great Wes Chatham. On the other hand, both Holden and Miller hold up better in the book than the show, given the greater focus on them as protagonists. Miller, especially, great in the show, is a messy person with a remarkable talent for piecing things together, not all at once but worrying at each problem like a determined terrier until he gets there.

Reading it also feels like you could be reading something that has sprung from a roleplaying campaign. Each different character feels like they could have been created from a book of classes and skill sets.

It's a real treat of a book to read, and there's always something potentially world-ending going on, setting the stakes high and motoring through to the finale. You can absolutely see why this became the success that it is, and it's a fabulous introduction to characters you will love, and sometimes hate in equal measure.

I read book one just as a curiosity to compare with the show - but I'm hooked, and I'll be back. 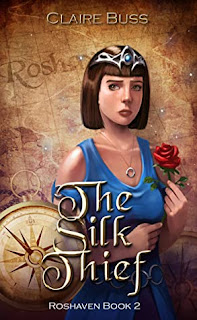 The Silk Thief, by Claire Buss

This is a welcome return to Roshaven from author Claire Buss - a series that started out with The Rose Thief.

Picking up after the events of the first book, the Emperor has a dilemma, she has to pick a name. Fourteen apparently will not suffice for the people. Worse, she also has to pick a husband. And it would be awfully nice if she could get people to call her Empress as well.

She turns for help to those who came to her aid in the first book - the Thief Catcher Ned Spinks and his companion Jenni the Sprite. But with Ned beset by a Nightmare - not just a bad dream but a supernatural haunting - and Jenni having lost her magic as she goes through her coming of age, they might not be the best people to help. Worse, it might just cost Fourteen the kingdom...

Mixing wit with wisdom, there is a real Pratchett feel to much of this. It's laugh out loud funny in places while spiking in thoughts about sexism and social inequality along the way, all without being too heavy handed. There's also love. Y'know, the kind that feels real, not the sort that feels levered into the story just for a bit of romance. You find yourself rooting for characters even when they don't know themselves what they really want.

I particularly love the character of Jenni the sprite, a Cockney accented grump of a fairy far from afraid of saying the impolite but necessary thing.

It's a warm, witty, wonderful delight of a tale, and I heartily recommend it. It's better even than the first book I would say, and that's a rare treat in itself.

The Silk Thief is available here on Amazon - and book three, The Bone Thief, is out today. 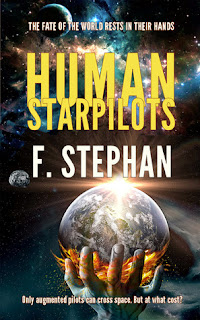 There's a smashing idea at the heart of Human Starpilot. Humanity has encountered aliens, and it might just be the thing that saves an Earth facing the collapse of its ecology. Earth has something of its own that the aliens want - pilots.

Earth suddenly finds itself trying to find a place in an alliance that depends on technology far more ancient than those using it, and its bargaining chips will be the humans trying to earn a place alongside other species as pilots of these vessels.

The story itself follows Brian and his fellow cadets as they try to master the art of piloting, something that requires the use of nanotechnology injected into their systems - something that can fundamentally change the pilots themselves, or even kill them.

In a lot of ways, we're in the same kind of territory here as Orson Scott Card's Ender's Game, and there's something of the same sense of exploring the morality behind the use of technology too, with the lives of the pilots little more than a way of Earth getting what it wants - and the pilots keenly aware that the price of failure if they don't master this alien technology could be the catastrophic failure of Earth's ecosystem.

So far, so good - but there is a but. I'm not certain, but it feels as if this book is written in the author's second language. Credit for that, they do a lot better than I would, and that brings with it too some good things in a different approach - but it really needed a tighter edit. There are a lot of incorrect word choices and typos, but it could also have done with better editing overall to make the story slimmer and smoother. Some of the errors are glaring, such as when a list of five trade rules is presented and it only lists four. The title itself I'm not 100% sure of - on my version of the book it's Human Starpilot, while on Goodreads it's got an extra s on the end as in the picture above.

A lot of the ideas in the book are interesting, but the wording makes it harder to get your head around some of them, while a lot is left hanging over to be resolved in sequels.

All told, I generally liked it, but would advise readers to take a look at the "Look Inside" function in online shops before they take the plunge. If you can live with the occasional incorrect word choice or typos here and there, go right ahead. For me, though, it really needed a solid edit to make the story shine. 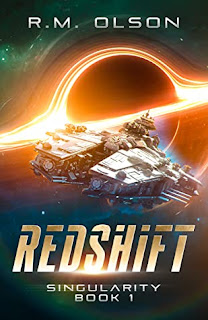 Redshift is the first book in the Singularity series - and it brings together a motley crew of adventurers as the world changes in an instant with the appearance of a mysterious portal. More than that, something that emerges from the portal gives hope of a cure to a defect that has long been plaguing humanity, and a chance of survival for those affected by it.

Into this are plunged a genius scientist along with his best friend, a top politician who might find herself being outmanoeuvred by a rival, and the galaxy's best assassin trying to escape a government bloodhound on her trail.

The portal brings them all together - in one way or another - but this book is more about the troubles on the way, with murder attempts, sabotage and mutiny all on the agenda.

This is a rollicking ride of a book. It's perfect for those who want to binge read through a series (more books on the way), with characters that are intriguing and a soap opera tale to plunge into. If it's hard sci-fi you're after, this isn't it, but nor does it aim to be. Instead it's in the vein of Firefly or Dark Matter.

Another positive to mention is the use of non-binary characters and a range of relationships, all as part of a universe that doesn't make that a big deal but just ordinary life.

There's a lot to love in this book, and a lot left to explore in future episodes. I'm giving it four stars, because I perhaps wanted a bit more of what is left over in this book instead, which focuses more on the characters and less on the situation that brought them together. But as a starting point, it's a good read.

Redshift is available here on Amazon