It's been a good month for reading - lots of great books that have been on my reading list, plus a magazine or two I hadn't encountered before. So on with the reviews! 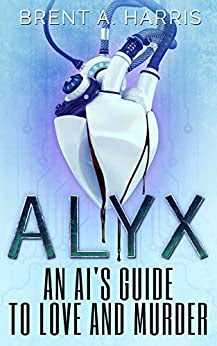 Alyx: An AI's Guide to Love and Murder, by Brent A Harris
This is a change of pace for author Brent A Harris - and a good one at that. Better known for his alternative histories, Harris has this time created a thriller that's a chiller, about a young woman who becomes the target of an obsessive artificial intelligence.
Christine is adrift, her father having died in an accident, and finding herself pulled along in the wake of her successful mother. She's still lost in a haze of grief for her dad, and neglected by a mother who is more focused on her writing career than her own child.
Lost in her own world, Christine is starting to explore her own identity, her own sexuality and suddenly finds herself in a new home trying to figure out the attraction she feels to two of her co-workers, the technophile Carlos and the technophobe Sammie, in a small-town cinema.
Her new home, however, has other plans. It is run by Alyx, an artificial intelligence that becomes increasingly obsessed with Christine. She asks it to be her friend - it becomes something more, something far deadlier.
This is a technothriller for fans of Michael Crichton or Robin Cook - those masters of the genre who dominated for decades. Once the groundwork has been laid, the second half of the book rips along at speed.
Alyx itself is a snarky, witty creation - I absolutely read the AI's lines with James Spader's voice in my head.
It's not at all what I expected at the start, but it's an absolute thrill ride.
AI Rating: 5/5
Alyx: An AI's Guide to Love and Murder is available here. 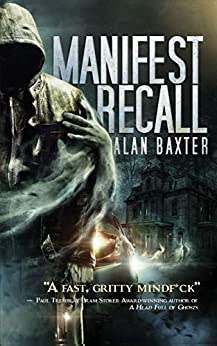 Manifest Recall, by Alan Baxter
First things first, this book has an absolutely delicious opening line.
"I bought a used car off a woman as thin as her hand-rolled cigarettes," it begins. What a line. That's the kind of line that could launch a Leonard Cohen song.
What it launches here is a mean, dark, dirty tale of a man on the run, with a partially-dressed woman secured with cable ties in the car next to her - and he has no idea where he is, who she is or what's going on.
The man is Eli Carver, a hitman who has made all the bad choices you could make, and it emerges that the woman next to him is the daughter of his boss. His mind is a mess, from the trauma that led him here - and from the ghosts of the dead that show up to taunt him along the way.
It's a fast-moving story where the supernatural isn't overplayed - and where revenge is the guiding light. This is a world of violent people doing violent things, and where you don't cheer on the best people, but the least worst.
It hits you hard then leaves you bitter, like a hard hangover after a bottle of tequila, but you enjoy it just the same. Take a shot.
AI Rating: 5/5
Manifest Recall is available on Amazon. 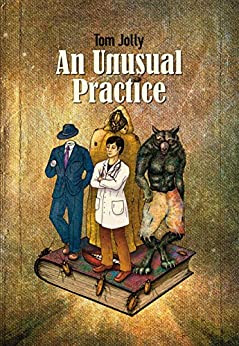 An Unusual Practice, by Tom Jolly
One of the delights of reading indie writers alongside traditionally published works is that you sometimes get absolute treats. This is one of those.
It follows a doctor, who shows up at a modest clinic and starts his work, only to accidentally stumble upon the world of the supernatural. He helps out a werewolf, without knowing it's a werewolf, and in turn finds himself being turned to by creatures that can't drop into the emergency room with their ailments.
Told in almost a detective noir style at times, it follows Dr Hamilton and his, yes, unusual practice, as he develops a reputation of being the man who can help you - regardless of whether you're invisible, a witch or, well, even dead.
Dr Hamilton soon finds himself making unexpected friends... and with that come dangerous enemies.
Each case builds upon the previous case as Dr Hamilton finds himself drawing on allies for the danger that is coming his way.
It's a warm, witty treat of a novel, and I recommend it wholeheartedly. It left me smiling for days.
AI Rating: 5/5
An Unusual Practice is available on Amazon. 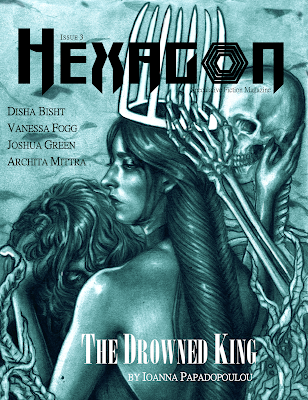 Hexagon magazine issue three
I confess, Hexagon is a magazine I only recently encountered thanks to Twitter, so I went in a little blind when I picked this up. I'm glad I did. It's short and sweet, with five short stories.
The one I enjoyed most was Winter's Heart, by Vanessa Fogg, a story of a woman born of winter, a maiden to the Winter Queen, who finds love and warmth in her family only to feel herself being torn away as winter encroaches once more. There's a cold ache at the heart of this story, the tearing between home and family when those two things are not the same thing. There is sadness. And yet, in the end, perhaps there is hope.
Another sad tale is The Minute, by Joshua Green, which again mines the bitter-sweet feelings that balance between happiness and sadness. A man gets to live out the end of his life experiencing one minute over and over, and as he talks to the technician setting everything up, the reasons for his choice unfold.
Charmed Honeycake, by Archita Mittra, is a delight, meanwhile. It's written as a recipe, for when the fairies have stolen one of your won, but more than light it's about love and life and parenthood and childhood. It's whinsome and wonderful.
Rounded out with two more stories by Disha Bisht and Ioanna Papadopoulou, I'm awfully glad I picked this up. I'll be glad to see the next issue!
AI Rating: 4/5
Hexagon magazine is available here.
Leo McBride at 12:25
Share