BOOK REVIEW: Light's Eyes, by Yvette Bostic; 250 Things You Should Know About Writing, by Chuck Wendig; Gunsmoke & Dragonfire: A Fantasy Western Anthology, edited by Diane Morrison; Horror by Cathbad, by Cathbad Maponus; The Life of Captain Marvel, by Margaret Stohl 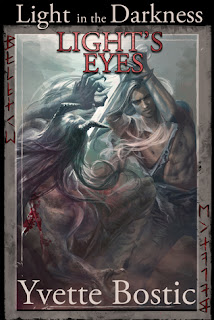 Light's Eyes is the second in the Light in the Darkness series from Yvette Bostic (third if you count the short prequel novella, which you really should read as part of the series) and picks up right from where the first book left off.
It's a story of superhuman beings battling against demons during the Napoleonic War, trying to foil demonic plans to throw the world into turmoil and subvert it to their dark will.
Now let's be honest here - this is book two. If you're interested in how this is then you're already invested. You're not going to start here. Or to quote Captain Mal Reynolds, "You can't open the book of my life and jump in the middle."
Go back to the start, begin there and I'll meet you back here once you've caught up.
Caught up? Good. Well, this one has more of the same fast-moving adventure - but with a twist. There are new enemies to bolster the old, and new allies to help our band as they fight on the side of the angels.
I particularly liked that the heroes keep coming to the aid of those who find themselves often trampled on by life - the occupants of a brothel, the villagers about to be steamrollered by demons, those without power on their side.
A resolution to it all remains, of course - which on the evidence of this book will be suitably epic. 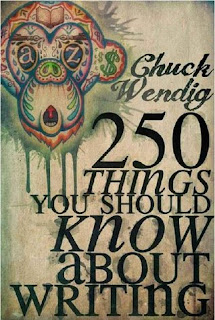 250 Things You Should Know About Writing, by Chuck Wendig

For anyone who has followed Chuck Wendig on Twitter or at his blog - and if you haven't, you should - he's refreshingly free of BS when it comes to advice on writing.
He's helpful, supportive, and doesn't waffle on about airy fairy matters. He's a sit your butt down and write kinda guy - and his 250 things you should know is in the same vein.
It's a 250 Commandments he says you should feel free to ignore, a Desiderata with added swearing. For those who suffer a lack of motivation, or run into writer's block, having this by your computer would be no bad way to start your day. Pick it up, give yourself a jolt of unfettered writer roar, then do what the man says.
Sit your butt down. And write.

AI Rating: 4/5
250 Things You Should Know About Writing is available on Amazon. 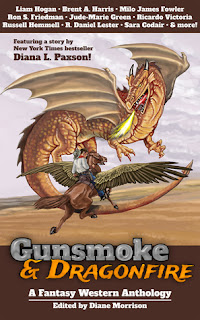 Out on the trails of the Old West, there are hidden places. Shadows off the path, a mystery at the far end of the journey. In those dark spaces, the weird can be found. In those places, this anthology exists, spinning tales of fantasy and horror, out there where a six-shooter may not be enough to save you.
There might be dinosaurs lurking there, or dragons - maybe the ghosts still walking the town they used to frequent.
I loved the range of imagination on show here. There's Joachim Heijndermans' tale of a gunslinger in a town he might be better off not picking a fight in, in When The Bell Strikes Three, the kind of story that feels like it's still lurking in The Twilight Zone, resting its boots on a boardwalk rail as the music starts to play.
There's The Case of the Vanishing Unicorns, by James Blakey, the kind of mystery a mid-West Poirot might have loved to solve.
I also enjoyed No-Sell, from Ricardo Victoria, taking the theme and running with it, for in a Wild West world where magic is commonplace, what use is a gun? And what would the equivalent of a snake oil salesman do with one if he had one?
Sara Codair takes the theme to the plains of Mars, with a particularly poignant tale of a broken marriage, and the tests the partners face as they try to keep their community alive.
Then there's Brent A Harris' tale of Bass Reeves, the black lawman who inspired the legend of the Lone Ranger, here having to take on a dragon, a cracking tale of adventure.
Diana Paxson offers a tale of an artist that offers a simmering feeling of Lovecraft to it - and there's even a Robert E Howard story, with Solomon Kane swinging into action.
There are more than two dozen tales in here - so of course some stand out to me more than others, such is the way of anthologies.
One note I should make - I appear in the anthology twice, once in the list of folks who backed the Kickstarter, and once as a character! I'm polishing glasses behind the bar for Robert Lee Beers' reprinted tale of time travellers arriving just in time for the San Francisco earthquake... I fear some of those glasses might get broken.
All in all, this is a smashing way to discover a host of authors in the Weird West genre - with some great stories to read along the way. Joachim Heijndermans' story was my favourite, with Sara Codair's not far behind, but pick it up, find your own new author to love. 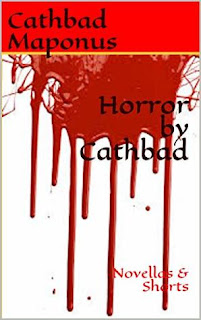 Horror by Cathbad is a collection from an author whose work I've enjoyed before. Here, you'll find a trio of novellas, and a bunch of short stories - some of which are super short, not even a page long.
That said, the book doesn't skimp for length on the whole, with the stand-out stories being the novellas, Killing Dreams and Axe.
Killing Dreams is the pick of the bunch, and it starts out the collection, telling the story of a detective trying to track down the supernatural killer of a series of criminal lowlifes. It's gruesome, it's messy, and it's gleefully fun. The identity of the killer - and the resolution - are nicely done too, with surprises in the outcome from Cathbad.
Axe is more straightforward, a blood-filled chopfest as an axe-wielding killer makes their way through a host of unsavoury characters.
It could do with a little bit of typo checking, but this is splatterworthy fun for a dark night's read.

AI Rating: 4/5
Horror by Cathbad is available on Amazon 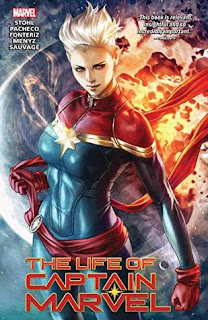 I picked this up for free as an Amazon Prime borrow - so I can at least be glad I didn't spend any money on it, which is a good thing.
After all, what did Captain Marvel need as her movie was heading to the screens? A retcon! No, no, she did not need that. And yet here it is.
Once more the story of Captain Marvel has been messed with, and c'mon, surely Carol Danvers has had enough of a messed-up journey to deal with. From being Ms Marvel, through losing her powers, becoming Binary, back to Ms Marvel and now with the Captain title, her hither-thither history has been a bit of a mess. This doesn't do anything to clear it up, just adds on a new reason why she got her powers and saddles her with the crappiest family and childhood upbringing it can manage. Abusive father? Yup. Mother who doesn't stand up for her? Yup. There are twists in here that I won't reveal but they make the situation make even less sense.
Throw in a waste-of-space brother character who serves as nothing more than an anchor to keep Carol around, and a drippy, slightly stalkery love interest, who takes to blaming Carol the instant bad guys show up and its hard to care too much about this.
Oh and panic attacks. Now she has panic attacks too. Because that's a surefire way to help undercut the wham-bam heroics that Kelly Sue DeConick brought back to the title.
I honestly can't fathom why Marvel felt the need to retcon Carol ahead of the movie - especially as the story here doesn't match up with the story in the movie - but I think you can probably safely ignore this title on the assumption it'll be undone again in a couple of years' time.


AI Rating: 2/5
The Life of Captain Marvel is available on Amazon.