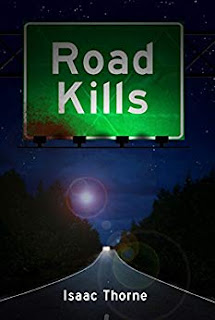 I had the pleasure some time back of reading and reviewing Diggum, a short story by Isaac Thorne about a gravedigger with murderous intent - and promised myself I'd come back for more of his work.
Road Kills is a collection of his short stories, neatly ordered with a theme of tales that could take place out on the road, where the flash of headlights up ahead could bring a welcoming face or a dangerous stranger.
Some tales are linked - such as the saga of the pretty girl who snaps and goes on a murder spree through several of the stories here - others are standalone.
Particularly creepy was Bedside Manner, telling the story of a little boy haunted by the literal ghost of his father's past mistakes, full of the cloying fear that comes with a childhood bedroom plunged into darkness and parents absolutely failing to realise that the monster really is in the closet.
Hoppers is a revenge tale... about bunnies. For Buffy fans, maybe Anya's fears were well founded.
And sometimes the road is less travelled, such as the detour into space for Safety First, a story of first contact about to go horribly, horribly wrong.
Diggum reappears here too in two forms, both the original short story and a screenplay version. It's the best of the tales to be found in this collection, still as creepy as the graveyards its words frequent, but Bedside Manner is a strong challenger. Not all tales quite caught me - I wasn't keen on the social media-inspired Dislike, and the trio of stories about the killer girl Tiffany weren't my bag. But that's okay, any short story collection will have tales you love more than others.
Sometimes, you catch a single work by a writer and investigating further disappoints - that's far from the case here. I want more. 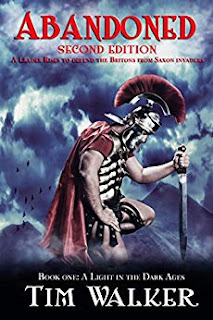 Blimey, this is thorough in its exploration of British history! Much credit to author Tim Walker for a well researched story looking at the time of the Roman withdrawal from Britain - and the consequences it means for both sides involved.
Abandoned looks at the early part of the Dark Ages, and you can see the amount of effort the author has put in to ensuring accuracy.
The story hops through several of the characters involved in the era - which while helping to cover the scope of events of the time does have a tendency to dilute how we feel about the central characters. Also, I felt it could have used, to quote Elvis, a little less conversation, a little more action. The early part is slow but picks up as sides move into conflict with one another.
Stick with it and you'll find yourself drawn into the details of the battle, as the cut and thrust moves beyond the shaping of empires to the visceral desire to protect family.
In the end, this is a love letter to history, and a credit to the author's passion for his subject.

Abandoned is available on Amazon here. 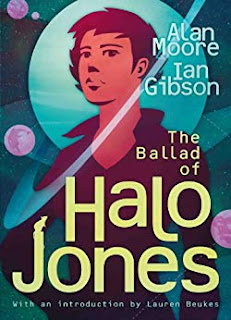 The Ballad of Halo Jones, by Alan Moore and Ian Gibson

I'm not even going to pretend this is a new book to me. I read this first of all issue by issue back when it first appeared in 2000AD. Those issues were much treasured, and well thumbed - so when the complete collection appeared on Kindle, I wasn't hard to convince.
Halo Jones is the heroine we need. Caught in a dead-end world with a family of best fit rather than genetic history, she's trapped. Bored. Almost numbed by an environment that stifles innovation, crushes emotion, drowns out aspiration in a mire of vid soap operas and at its worst leaves hollowed out drum-drum-drummers tuning out the world to listen to a non-stop beat.
But Halo Jones is different. Halo Jones wants out.
It's glorious to revisit the story after all this time, seeing the sub-plots as they play out, noticing the groundwork being laid for tragedy.
Through it all, Halo shines. It's a darn shame that Halo hasn't soared beyond the boundaries of the comic pages - barring for a title appearance in a Transvision Vamp track. She's kickass without being obviously badass. She's a feminist hero in a time when they were few and far between. She's the girl who got out.
The complete collection features three books in total - and they are left poised waiting... waiting... waiting for more. They'll never come now, I'm sure. Moore and Gibson have spent too many years since they left Halo hanging, and rights squabbles seem to have abandoned her on the shores of a distant planet.
But it's brilliant. She's one of the finest comic book characters ever created, and I've loved every moment of being able to hang out with Halo Jones once more.

The Ballad of Halo Jones is available on Amazon here. 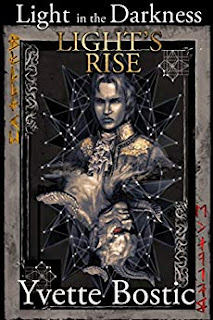 Recently, I read the prequel to the Light in the Darkness series - of which Light's Rise is book one, and it was so entertaining I wanted to read more.
It's an innovative series - starting in the Napoleonic War when a young Austrian soldier finds himself confronted by literal demons. Not inner demons, but the human-consuming kind, and is soon enlisted in a war very different from the one he enlisted for.
He becomes part of a somewhat-superhuman team doing battle with demons across continents and across decades as the underworld creatures seek to subvert the world locked in warfare for their own ends.
The soldier, Darian, finds himself imbued with his own powers which he can use in the battle, as he and his comrades strive to save humanity.
The story is Christian-themed, but not heavily so. The hints of good v evil in the story are subtle and not preaching, and the whole thing reads as a light adventure - I could see it doing awfully well as a manga.
Dashing along at a fair clip, it's a real page-turner - and the finale sets up the next step in the series with... well, that would be saying, wouldn't it? 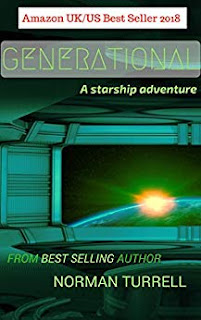 Norman Turrell is a thoughtful writer - and Generational is a tale that asks questions of our future.
Set aboard a colony ship orbiting Earth and preparing for its voyage, the story dwells less on the nuts and bolts of the science of the ship, and more on the social science of the humans aboard it.
An early, off-kilter encounter introduces lead character Leyton to a young woman whose role is, as she puts it, a breeder. Or more colourfully a "ghetto-ho" or "ship's bike". She seems unstable, and Leyton is whisked away from her - an early sign that not all is well aboard the ship.
Leyton becomes the explorer guiding the reader as the slightly twisted society on board is revealed - freed from the structures of society down below, the ship has developed its own paths, becoming possibly a powder keg ready to blow... or the only hope of Earth's survival.
It's an unusual story - and I think of that as a good thing. What shape will our future be, what route will our philosophies take us? These are the questions at the heart of Generational - a tale that asks the unexpected.

Generational is available on Amazon here. 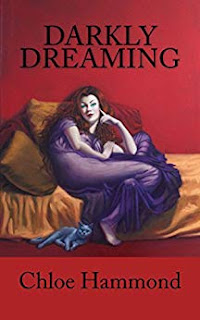 This is an unusual vampire novel. Two divorcees (or near-divorcees) are wrestling with the problems of mid-life, jettisoning their unfulfilling husbands and struggling with work and the prospect of trying to have children - when an encounter leaves them forever changed. They become vampires. Beautiful, ravishing vampires.
They proceed to try to make sense of their lives as they chart their unlife. Their vampire existence brings new passion, occasional accidental lesbianism, and a desire for growth. Eat, Prey, Love, you might say.
I must say this book is not for me - I feel I'm very much not the target audience. It's mildly racy and it's deeply wish fulfillment at work, but if that's what appeals to you, you might want to dip into the first pages preview.
I'm giving it three stars - but not being the intended reader for this, I wouldn't take that as a criticism. I like my vampires darker and more dangerous, whereas with this, being undead has never been so life-affirming. 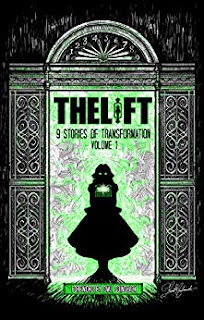 The Lift is available on Amazon here.
You can hear the podcast here.
Posted by Leo McBride at 23:42