Welcome back, all - I've been struck by a little post-Christmas bug the past few days, which wasn't so good for cracking on with work, but sure helped me zip through some of my current reading. We have sci-fi, fantasy - and another graphic novel to review this week. 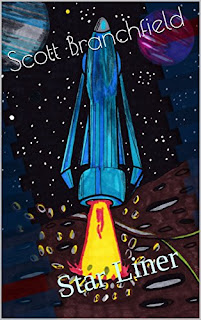 There's a classic feel to this deep space tale from Scott Branchfield. It's like one of those smashing 70s or 80s sci-fi tales I used to devour from the library such as Andre Norton or Alan Dean Foster.
The premise is fairly simple - Jan is an entertainer recruited to help guests aboard a luxury space liner pass the time as they face a journey of months between stars.
It's a fairly slow start, as Jan meets his fellow crew members, learns the layout of the ship... and then things unravel quickly, with a murder on board. Suspicion points Jan's way, but that murder is just the beginning as events spiral out of control. Jan starts out having to clear his name, but soon will be faced with a fight for his life itself.
Branchfield really ratchets up the tension as the book goes along, with the tale moving at a real pace after that initial start.
By the end, you're really rooting for the characters... well, most of them. One or two you're happy to see come to a gruesome fate! 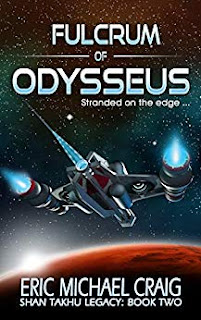 If you're thinking the author's name is familiar, you're right - I reviewed the first book in this series just a week ago. The second book is out already, and the third book coming soon - so I expect you'll see another review soon too!
Fulcrum of Odysseus picks up where the first book, Legacy of Pandora, left off - with Chancellor Kathryn Roja on the run from the Union fleet and the crew of the Jakob Waltz perched on the edge of a mystery that may be bigger than the conflicts tearing apart human society elsewhere in the solar system. The Jakob Waltz section of the story more and more reminds me of epics such as Greg Bear's Eon - but it's just part of the whole picture.
You really need to read book one rather than drop into the middle of events here, but the story is all the better for doing so, as characters that seemed to be minor players in the first book come into their own, stepping up into the limelight and the battle for political supremacy engulfing mankind.
There's a lot to love here - but one thing I particularly have to note is the dialogue, filled with altered future dialect and phrasing that seems odd at first but enriches the setting.
Roja drops a little into the background of the saga in this book as events elsewhere dominate, but ends up... well, that would be telling. What I will tell you is that I'm very much looking forward to book three.

AI Rating: 5/5
Fulcrum of Odysseus is available on Amazon here. 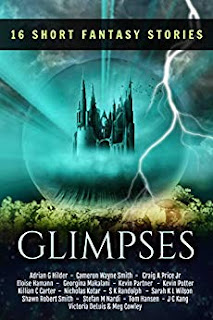 I do love reading short story anthologies - but I'm afraid this one felt a little undercooked.
From the start, it hit a stumble - the opening story, The Killing Fields, by Sarah KL Wilson, is little more than a vignette set in her larger universe. Throw in a bit of weirdness in that the empire in the story is very much Oriental in nature but is headed by a woman with a Scottish-sounding name (without any explanation of how the two come together) and it's an awkward read.
The anthology stays awkward throughout - the fantasy focus isn't always very tight (one story even diving off into Lovecraftian lore), resolutions are a bit too quick and easy, and a few too many are footnotes to a larger universe without really giving us a grasp of the setting in the story itself.
Some are plain silly - The Wolf of Wool Street starts with a parody of having unwanted religious guests coming knocking at the door before introducing us to a werewolf by the name of... Woger. Who has a grandfather called Wandolph. It's a bit heavy-handed.
My favourite story from the anthology came quite late on - Dance of Swords by JC Kang is another encounter with Eastern fantasy, but done far better, as a dancer turns would-be assassin, losing herself in the power of her music even as she edges closer to vanquishing a dictator. It's without doubt the highlight of an overall disappointing collection.

Glimpses is available on Amazon here. 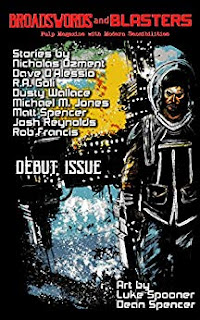 Broadswords and Blasters is a blast from the past in many ways - a two-fisted return to pulp fantasy and sci-fi, and it's jolly good fun.
As ever with anthologies, some tales find favour more than others, and one or two definitely missed the spot for me. A bit too much wish-fulfilling sex here and there, and one story that if it was adapted into a roleplaying game would plausibly have the title Pincers & Penises. But hey.
One of the stories is a two-parter, the second part being in issue 2, which was probably a bit of a mistake to include but such are the lessons one learns when trying something new.

I really enjoyed the story The Executioner's Daughter, about a young woman trying to take on the hood of her father, while Dead Men Tell Tales was a clever little sci-fi tale by Dave D'Alessio.
Perhaps the best tale of all though was the sparkling Saturday Night Science, by Michael M Jones, a full-on interdimensional romp of a first date between two women geniuses with occasional teasing about light bondage included. It's witty, it's joyful and it's really quite touching by the end.
I like the joie de vivre and all out fun in this magazine - and the team's philosophy as spelled out in the foreword. At the time of writing, I think they are eight issues in - I'll certainly be back for more.

Broadswords and Blasters Issue 1 is available on Amazon here. 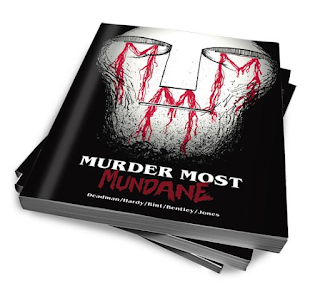 I picked up Murder Most Mundane from the Kickstarter run by its publisher, Mad Robot Comics - and it's a corker of a read.
Take a dash of Wicker Man, a sprinkling of Midsomer Murders and the slightest smidge of Hot Fuzz and you have the story, in which a big-town police officer fallen on hard times winds up in a tiny, sleepy village.
And then the killings start.
Gruesome and witty by turn, the deaths that stalk the streets of the village of Fadfield get progressively more inventive, and come faster and faster. There are hints too that something strange is going on - is this the work of just one killer? Or is everyone in the village in on it?
The artwork by Clark Bint is great too - and one particular shot of the detective and his sidekick walking up the street while every curtain twitches sets the mood perfectly.
This is the best I've read yet from Mad Robot Comics - and deservedly gets five stars.

Murder Most Mundane is available on the Mad Robot Comics website.