Having just completed my review of the Best Five Books of 2018, it's time for a new year and a new round of books!

Without further ado, on to the reviews! 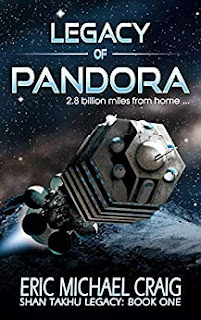 I really enjoyed the Atlas and the Winds series from this author, so it's no surprise to me that this is a great slice of science fiction.
The heart of the story lies in two mysteries - one for the crew of the ice prospector ship Jakob Waltz as they encounter an anomaly that could threaten their lives, and the other for Fleet Chancellor Kathryn Roja, who uncovers a plot to undermine the government and perhaps tilt the solar system into chaos.
Both mysteries are deftly handled, both the hard sci-fi as the ship's crew must fend for themselves to unravel a puzzle that leaves their ship battered and their bodies bruised and worse - and the hard politics as Roja tries to work out who is behind a scheme that could see the construction of a secret fleet of ships.
The author deftly moves the pieces of the puzzle into place - just in time for all hell to break loose!
I really enjoyed this book - Craig has a real talent for not just explaining scientific detail well but to use the science to advance the story itself. This is rollicking, knock-it-out-of-the-park sci-fi, an adventure that sizzles across the stars. It's the kind of writing that stands comparison to Larry Niven or Greg Bear - and would be a great read for fans of the Expanse series.
This is the start of a series, and I'm truly hooked - count me in for the next books!

Legacy of Pandora is available on Amazon here. 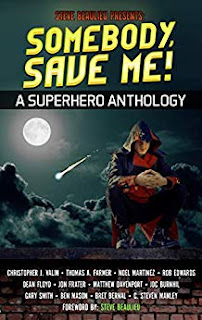 Somebody Save Me! A Superhero Anthology

As a big fan of the Wild Cards series from George R R Martin and friends, this collection intrigued me. There's something delightful about exploring superhero stories in other media beyond comic books and movies - and it gives an opportunity to really get under the capes of those out to save the day.
Unlike Wild Cards, there's no consistent setting here - it's a range of short stories from different authors, each in their own settings, and some hit the mark, others less so.
I enjoyed Rob Edwards' exploration of the source of powers in his world and both it and Noel Martinez and Christopher J Valin's depiction of the legacy of a hero certainly do show us some of the secret identity behind a hero.
Others feel a little lighter, perhaps fragmentary because of being glimpses of individual authors' larger universes or stories they're exploring elsewhere.
All in all, it's a light read, one that will be ideal to wile away a journey, while dreaming of saving the world.

Somebody Save Me is available on Amazon here. 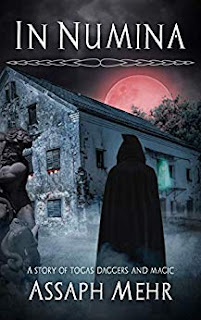 In Numina, by Assaph Mehr

Well, goshdarn it. You know that moment when you read an author new to you and they absolutely hook you from beginning to end and you close the book and say to yourself "Hey, I've got a new favourite author"? This book was that moment for me.
Assaph Mehr tells a story of mystery and magic in ancient Rome. Think Jim Butcher's Dresden Files taken back a couple of millenia. Felix the Fox, a skullduggerous scallywag who alternates between being a troubleshooter and getting into trouble with women, is commissioned to solve a little property problem. Namely, his employer's cheaper properties are having a problem with keeping their tenants, what with the ghosts and terrors and deaths and whatnot.
So begins Felix's adventure which sees him chart a course through the supernatural and political worlds, and between the affections of his investigative companion and her mother. It's not easy being a fox.
I thoroughly enjoyed this book - it really hit its stride in a middle section that was utterly gripping. The cast of characters are great too - I really rooted for even minor characters. I even teared up over one character's reaction late in the book. Sniff. Honestly, I prefer it too to the Dresden Files, as it treats its female characters much better.
A fast-paced thrill of a read, this is absolutely worth adding to your bookshelf. Enjoy!

In Numina is available on Amazon here. 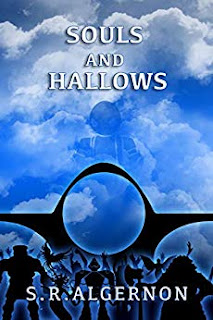 Gosh, this is a hefty collection of short stories. S R Algernon presents a collection of flash fiction and short stories. I'll confess, I wish the longer stories came further towards the front of the collection - we start with a run of flash fiction that slip away before you can get a good grip on them. Enjoyable - but that's the nature of flash fiction, it's like a flash of a shooting star across the sky and then it's gone.
It's the story Rosetta that first grabbed me with both hands, pushed me into a chair and told me to listen up - it's a tale of linguistics and, perhaps, ancient hands guiding our world. It's deftly, delicately handled, and sumptuous in its ending.
After that, I was hooked, be it to visits to The World's Fair, or dalliances with distant artificial intelligences; tales of dragons or tales of the stars. I did feel that the shorter flashes were a bit too light perhaps, but there is weight elsewhere.
It's perhaps fitting that, for me, Rosetta formed the key to it all.

Souls and Hallows is available on Amazon here. 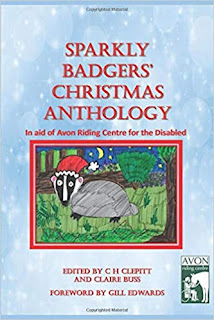 I picked this up over the Christmas holiday - and it's a sweet little anthology of festive tales, written to raise money for charity.
With just enough stories to cover 12 days of Christmas with one more for luck, it makes a good family read, touching on a reimagined Christmas Carol with badgers, to Santa visiting mermaids and a scientific theory behind how Santa really gets round all those houses at night.
It's fun, it's light, and it makes for a pleasant way to share Christmas.

This year, I'm going to aim to include in each review section a review of a comic or graphic novel. It might be a classic, it might be brand new - but we start with... 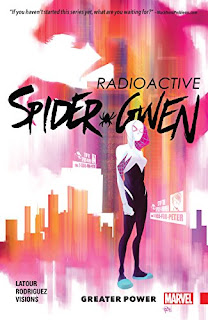 I swing in and out of the Marvel comics these days, so Spider-Gwen had passed me by a little - so it was a nice treat to see the first volume available for free on Prime Reading to get a taste.
Essentially a way of reframing the Spider-Man origin story with a different perspective, we see the Gwen Stacy of a different dimension take on the powers of Spider-Man, with the world upended in different ways in her dimension.
She fights beside a female Captain America, Peter Parker succumbs to the potent power of the Lizard injections, and Frank Castle becomes the cop on the trail of the spider vigilante. It's a nice twist on the regular Marvel 616 universe - where Spider-Gwen is a sometime visitor too.
Without preaching, without heavy-handed storytelling, we get a strong female line-up of characters and an interesting tale of secrets, regrets and friendship. It's good stuff.

Spider-Gwen is available on Amazon here.
Posted by Leo McBride at 18:11