FREE STORY: How I've Come To Hate The Sky, a flash fiction by Leo McBride 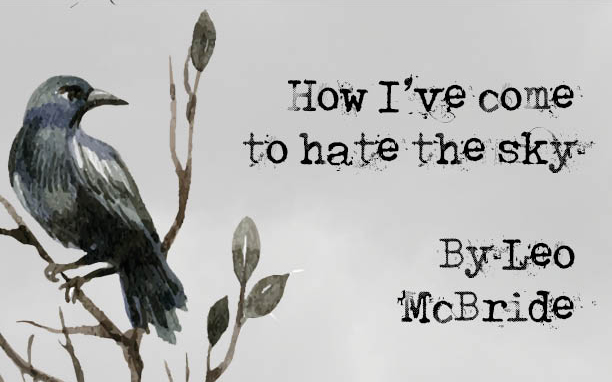 She was the first. But not the last. They found her body in a New York park, surrounded by her killers. A Murder of Crows, screamed the headlines. It was an oddity. An unusual event. At least, it was then.
The reporters turned to the scientists, asking how could this happen. The scientists brushed them off. It was a million to one incident, they said. All but one scientist, who quietly pointed out that crows were among the smartest of animals and asked what if they had learned something new.
The next day brought two more killings, both in the same incident. An old man was attacked in the street. A police officer tried to go to his rescue. The crows killed him too before they fled, taking his eyes with them.
A curiosity became a shiver of fear throughout the city. Scarecrows appeared on the lawns of the people who had them, in the windows of apartments for those who did not. The talk shows were no longer talking about how weird the first killing was, but rather filled with the voices of worried callers, asking what was going on.
The mayor said it was just a rogue group of birds, and experts were being consulted. Not that there were experts in this.
Day three brought ten deaths. All separate incidents across the city. This wasn’t one rogue group of birds - or at least, not any more.
The mayor issued a bounty, $100 reward for each dead crow. The environmentalists cried out, the hunters showed up.
The fourth day was the bloodiest yet. The hunters took to the streets, loaded up with their rifles, and the crows came for them. All the deaths that day were among the hunters. The crows suffered casualties, but there always seemed to be more. 35 hunters died that day.
People shut their doors, peered out their windows and listened to the TV news. The governor declared a state of emergency that night, and called in the national guard.
They called it the Central Park Massacre. The national guard rolled right into town, lined up neatly on the grass of the park, and began to die. The troops were trained to fight other soldiers, not the quick arrows that gathered above, so many that the midday sky grew dark. Then they fell, in a rain that turned red as they struck their targets.
The only survivors were those sealed inside their armored personnel carriers, and they fled from the screams of their comrades. The crows stood attendant above the massacre, massed on the trees of the park, defiant.
People didn’t dare to go out after that - and when they did, they were picked off one by one.
The president boarded Air Force One to come and take charge of the situation personally, but the TV anchor, stranded in the studio for days now, reported the plane went down - all four engines hit by a bird strike.
Trapped indoors, starvation and shortage of medicine started to take its toll. No more deaths one by one, now they came faster. Risk the birds, or die indoors.
Those who were lucky enough to get to their cars found they had no way of getting out to refuel. They couldn’t drive far enough to get away from the birds. The lucky ones were those who managed to get to indoor garages of malls big enough to find shelter.
The remnants of government started a rescue operation. Where to go? There was only one option - the underground shelters, stocked up on military rations long enough to consider alternatives. The few survivors reached there. Most didn’t.
We live underground now. Cultivating food where we can, and peering out reinforced windows at the surface world denied to us now. They say we’re lucky, that we ought to be grateful. But I sit and stare out the windows each day. They ask me if it’s because I miss the old world, the way it used to be, but it’s not. I come to remind myself how I hate the sky.