S.E. Sasaki is a sci-fi author and member of the Sci-Fi Roundtable group. Beyond that, her history includes being a researcher in freshwater biology, cellular biology, and neurophysiology and working as a surgical assistant in the operating room. It's perhaps no surprise then that she brings a wealth of scientific attention to detail to her work! Welcome to Altered Instinct, Sharon - take it away! 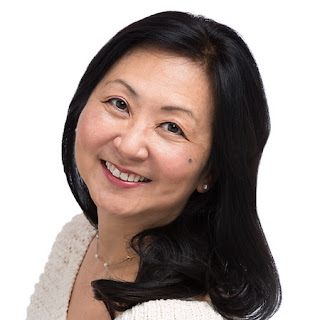 Tell us a little about your most recent book - what is it called and what is it about? Give us your elevator pitch to make us fall in love with it!

The new book is titled Amazing Grace and it is about the trials and tribulations aboard a medical space station called the Nelson Mandela. It follows the adventures of Dr. Grace Lord, combat surgeon, who has come to the Nelson Mandela to train under the galaxy-renowned Dr. Hiro Al-Fadi, a specialist in operating on genetically modified, animal-adapted space marines. In this third book of the series, a ship called the Inferno docks with the station, containing six patients in cryopods. It is requesting these patients be treated for a new disease. What transpires is an all-out attack on the Nelson Mandela with the goal of wiping out the human race.

I like to write about today’s world issues. I cloak the issues in science fiction as it allows me to extrapolate ideas or expand on them without pointing specific fingers or stepping on specific toes. Amazing Grace deals with issues of intolerance: intolerance of others, religious intolerance, hatred, and prejudice. Today’s political atmosphere is ripe with intolerance and racism and I felt it needed to be addressed. 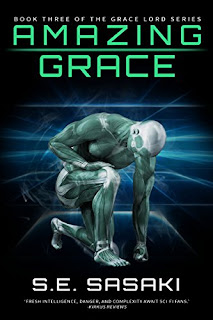 Without spoilers, what was your favourite moment of the story to write? What was it that made you enjoy that section so much?

I have to say that I adore Plant Thing . . . my alien. Plant Thing is the sweetest being and so much fun to write because it is discovering everything like a naive innocent child but Plant Thing is so misunderstood because it looks horrifying. Plant Thing symbolizes ‘The Other’, as well as ‘Nature’ in all of its glory. Everyone falls in love with Plant Thing.

Yes. Dr. Jeffery Charlton Nestor. He was just going to be this gorgeous doctor that my main character developed a crush on. Then he morphed into this terrible psychopath who tries to kill her, then kill Dr. Al-Fadi, then destroy Bud, then destroy the medical station. I tried to kill him off in the first book, and he got away. I tried to kill him off in the second book but it didn’t go quite as I had planned. He is a genius arch villain. I definitely decided he had to die in the third book. You have to read Amazing Grace to see if I succeed.

What are your favourite genres to read - and what is it about those genres that draw you in?

Well I have always read science fiction from Grade Two on. My Grade Two homeroom teacher was also the librarian and he handed me A Wrinkle in Time by Madeleine L’Engle and told me to read that. The concept of ‘The closest distance between two points is NOT a line but a wrinkle’ just blew me away. I was hooked. Then I had to get my hands on every SF book I could at the bookmobile, at the library, and finally at the bookstore when I could buy my own books. Now I am buried in SF books at home and a To Be Read pile that I will never finish. :P

I also like Mysteries because I like puzzles and I like to figure mysteries out. I read some Fantasy, some Horror, some Contemporary fiction, as well as Nonfiction.

Can I confess I've never yet read A Wrinkle In Time? It seemed to be standard reading on the western side of the Atlantic, but never really mentioned back in the UK where I grew up! What were some of your favourite books to read as a child? Which were the first books you remember falling in love with?

As a child I loved reading about mythology and I read the Greek myths and the Norse myths. A Wrinkle in Time by Madeleine L’Engle was my first SF book, read in Grade Two, and I loved it. After that, there was Podkayne of Mars by Robert Heinlein and Rite of Passage by Alexei Panshin. I read Dune by Frank Herbert in Grade Five and I was in awe. I had the Litany of Fear memorized! I read The Lord of the Rings in Grade Six and I must have read those three paperback books until they almost fell apart! I still love all those books.

Who are your favourite authors to read? Whose writing do you feel has inspired your own work the most?

Favourite Authors are easy but there are a lot of them! These are authors who I tended to buy whenever they put a new book out, sight unseen. Many are no longer with us, unfortunately.
Roger Zelazny, Gene Wolfe, Terry Pratchett, Lois McMaster Bujold, Connie Willis, Sherri Tepper, Ursula Le Guin, Richard K. Morgan, Joe Abercrombie, Ian McDonald, Dan Simmons, Steven Brust, Robert Sawyer, Patricia McKillop, Neal Stephenson, Neal Asher and probably a lot more I can’t think up right now…

I write comedy mixed with suspense/thriller. Bujold and Willis have comedy in their books. One reader described my books as a mashup of Game of Thrones meets Monty Python. Another reader (Shane!) said it was Doctor House meets Doctor Moreau. I like Terry Pratchett and I hope I capture some of the lightness of his Discworld books. 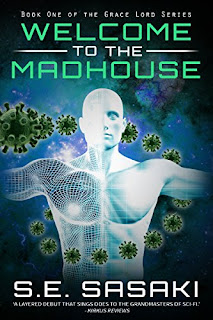 The Evil of Intolerance in all of its aspects - religious, genre-based, technologically-based, race-based - is a predominant theme. Prejudice of ‘lesser beings’ - in this case represented or symbolized by the androids and robots - would also be included in that. ‘Man versus Nature’ is an underlying theme, represented by Plant Thing. ‘Love conquers All’ or ‘Good overcomes Evil’ is probably the main plot theme. There are different types of love in Amazing Grace: love between friends, love between a father and a daughter, love between an android and human, love between an alien and a human, and unrequited love. LOVE, of course, wins out over Intolerance.

What do you do when you are not writing? Tell us about yourself.

I am a family physician who now spends all of her working hours in the operating room assisting in surgery, both elective and emergency. I spend a lot of nights, weekends, holidays, and early morning hours in the operating room when I am on call. That is partly why I write about operative medicine. It is a large part of my life. When I’m not writing or assisting in the OR, I am sleeping or trying to catch up on my sleep! Other hobbies include painting and creating collages, walking, downhill skiing, canoeing, kayaking, playing tennis, scuba diving, swimming, travelling, and at the moment, my husband and I are attempting salsa dancing lessons. It’s not going so well, but we are determined! Motion is Lotion.

Where can readers catch up with your work?

Thanks for calling by, Sharon - though we missed our traditional last question of what you're reading at the moment and what the best book you've read in the past year has been! I swear I'll lure you back in the comments section... ;)

Good luck with the launch of Amazing Grace, and I look forward to reading the series!