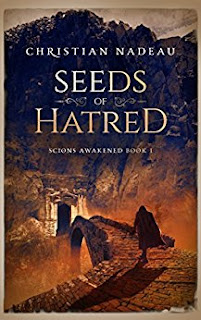 Seeds of Hatred, by Christian Nadeau

You know, there's a real love and care that's been put into the creation of this book. From the cover, with its beautifully balanced image that draws you in, through the characters who could have just sauntered in from a Fritz Leiber or Katherine Kurtz tale, you can tell the amount of effort the author has put into the book's creation.
The story itself tells the tale of a war between the Lightbringers and Darkbringers - opposing sides often treated as myth until their conflict bursts brutishly into reality.
It's a world of assassins and mercenaries, of magic wielders and shades, most often just trying to stay alive as the protagonists move from urban landscapes to seagoing adventures and more.
The focus is perhaps sometimes a little too wide, but when we catch up with the adventures of the sword-for-hire Marac or the refugee Lightbringer Alex, the story really takes off, bustling with verve and flair.
All told, I'm delighted to have discovered Christian Nadeau's work - this is the kind of carefully crafted world that evokes the spirit of classic old-school fantasy. I look forward to more!

Seeds of Hatred is available on Amazon here. 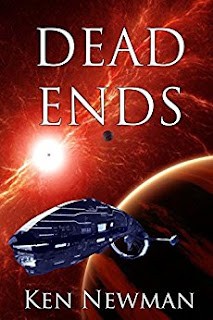 There are certain rules, they say, when it comes to writing. And by golly if Ken Newman doesn't break most of those over one knee and laugh while doing so.
Dead Ends is a sci-fi romp where science often takes a back seat to buccaneering and where the plot veers around like a spaceship piloted by Zaphod Beeblebrox wearing his sunglasses in the presence of danger. And yet it works.
A reject battle cruiser gets a last-minute reprieve to be used for an experiment involving a black hole as a power source. It's a massive thing, kilometres in length. Oh... and it's haunted.
Once the crew-to-be overcomes hurdles such as an alarming inability to retain one's clothes in the company of the opposite sex, off they go to the stars, where somewhere along the way they will face ferocious alien invaders, deceit and betrayal and... possibly angels? And where there are angels, there are of course demons.
It's not as straightforward as all that - Newman has his very own spin on such matters, and the detours he takes the reader on are often unpredictable but always enjoyable.
It's a bonkers space opera - and all the better for that. 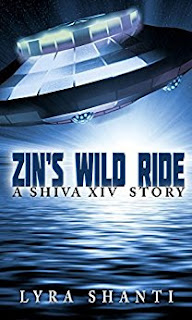 I've been looking forward to reading Lyra Shanti's work - her Shiva novels are on my Kindle awaiting an opening, but I stole a march to read this short story set in the same universe.
It truly is a short piece, you'll zip through this on a coffee break, but it's a nice little dip of the toe into the Shiva setting.
I won't give too much away about the story - suffice to say an eight-year-old prince is about to learn a lesson when going on the wild ride of the title. But it's fun, the author writes with zip and enthusiasm, and it makes you want to know more.
I suspect I'll come back to read this after the novels again, when it'll feel more like a DVD extra to the series - but as an introduction to the world goes, it's a fun read that reads like a fable in the midst of the sci-fi landscape.

Zin's Wild Ride is available on Amazon here.
Posted by Leo McBride at 23:40