BOOK REVIEW: Prometheus and the Dragon by Eric Michael Craig; The Leshy by NC Stow; and Gnarled Bones and Other Stories by Tam May 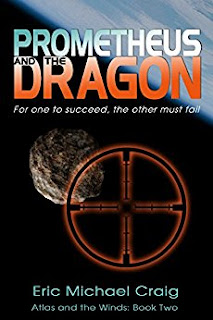 Prometheus and the Dragon, by Eric Michael Craig

One of my top reads of last year was Stormhaven Rising, and this is the sequel to that story.
That first book told the tale of the discovery of an asteroid headed on a collision course for Earth - but that was a distant threat throughout the story, with the real focus being how different factions mobilised to try to deal with that menace. More particularly, there were the political machinations that took place as different groups vied to take the primary role in tackling something that could prove catastrophic for Earth.
This book picks up where that left off - with two major plans in progress to try to deal with the incoming rock. Prometheus is a beam weapon designed to push the asteroid onto a new course that would miss Earth, but that beam needs to be sustained over many days to be a success. Meanwhile, a Chinese plan, The Dragon, is to launch a massive warhead that would shatter the rock. Both projects are operated from bases on the Moon - and the teams behind them are not on friendly sides.
Political manoeuvres on the surface see nations trying to settle old scores before the asteroid can hit - while a back-up plan of scrambling people to colonies on the moon in case the worst happens faces hazards of its own, with too many people and not enough room.
As below, so above - and ensuring safety on the Moon for both people and the projects that could ensure Earth's survival becomes a challenge.
This book really takes up the gauntlet cast down by the opening book in the series and runs with it - it's an absolute thrill ride full of hard decisions and harder consequences. More than a few times I cursed at the book as I turned pages filled with moments that bit deep. Then against those there are moments where you punch the air - such as when the Flight Infantry deploys in a skirmish on the Moon, tumbling out of the back of the vehicle carrying them at hundreds of miles an hour. It's the kind of kickass moment that reminds me of the Orion Ship in Niven and Pournelle's Footfall - a spaceship propelled by dropping nuclear bombs underneath it. Science kicking ass.
The latter half of the book sees the asteroid getting ever closer - will humanity overcome its divisions to succeed in preventing its impact?
That I won't spoil - but I will say you've got a great read ahead of you as you find out.

Prometheus and the Dragon is available here. 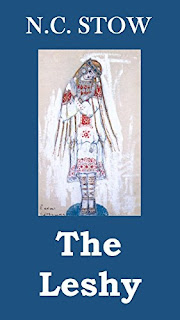 The Leshy, by NC Stow

This is a short tale rich in folklore - and it's hard to say too much without giving much away given the story's length.
What I will say is that it is a charming, thoughtful read.
Young girl Makva is coming to terms with who she is, and that The Leshy of the title is dead. Relationships between The Leshy and the natural world are explored, along with the power of witchcraft, but at its centre is Makva, questioning where she fits in the world, and the order of things.
It's a treat to read - not quite as straightforward a read as NC Stow's work The Kupala Night, which I reviewed recently, but more philosophical in nature.
It's like a snowflake melting on your tongue. Pure to taste, transient in nature but memorable nonetheless.

The Leshy is available here. 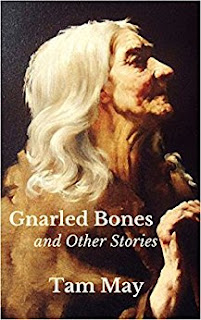 Gnarled Bones and Other Stories, by Tam May

This collection of five stories from Tam May is in equal parts enchanting and frustrating.
First thing first, Tam May has an intriguing voice at times as an author - but each of these stories feels a little undercooked, often coming to an end before they have really gotten started.
There are some delightful phrases in here - such as "He picked his words carefully as if they were ripe apples off a tree, aware of the sadness they left behind", but at other points there is a bit too much telling rather than showing, such as with the lengthy start to the title story, detailing the history of children Em and Denny before getting to the substance of the story.
Despite that, I look forward to more from Tam May. This is her first collection, and so it feels in part like she's clearing her throat, getting ready to speak in a work of greater weight. There is interesting material here - probably the story Broken Bones is the standout, best developed and carrying its tale over a period of time - but the potential is greater still.
One note - it could do with a keener eye on the editing front, moments such as when it says "the dye is cast" rather than die are oversights that throw you as you read.

Gnarled Bones and Other Stories is available here.
AI rating: 3/5
Posted by Leo McBride at 13:48