This article previously appeared in The Tribune Weekend section on December 16. 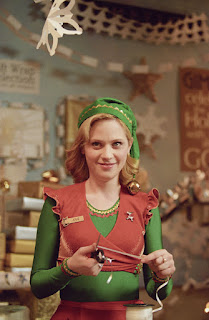 If you're looking for a show to listen to while you make your Christmas preparations this weekend, here's a few that might bring a smile or two as you prepare – or drink – the eggnog.

If ever you've caught the follow-up show to The Walking Dead, the post-episode chat show The Talking Dead, then you know host Chris Hardwick. The Nerdist is his podcast hangout, where he sits down with a variety of celebrities and just lets the conversation wander all over the place.
He is, without a doubt, an inveterate nerd, but he's a great host, bouncing the chat from topic to topic without ever seeming scattered.
The latest show features guests She And Him, the band featuring Zooey Deschanel and Matthew Ward, as they chat about Christmas traditions, favourite movies, TV shows they love and more.
It's a fun listen, even though it was clearly recorded some time ago – Matthew's Christmas wish is for a woman to be US president, for example. Spoiler alert: That didn't happen.
Often on chat shows, you get celebrities begin a little guarded, but there's none of that here, just a relaxing chat with good company. Not always for young ears, it should be noted, with occasional swearing.

What are the horrifying things from your youth that still plague you to this day? That's the basis of this show, where adults share the embarassing things that they created as kids – diaries, letters, lyrics, poems and more.
A lot of it is based around their live shows, so it often comes over as snippets from a stand-up set, but it's somehow cathartic to hear other people sharing the things that haunt them still from their youth.
Seriously, the number of times in any week when I remember something from many, many years ago and still feel horrified by the shame of that moment that for everyone else at the time was otherwise innocuous, so it's nice to hear others revealing similar angst.
Again, this is more of an adult show than for young ears, with swearing as part of the stand-up shows as you might expect.
Of course, at times it's something of a one-note joke, but when it's a joke we're all in on with memories of our own horrors of the past, it's a really good one. Well worth a listen.

I Tell My Husband The News

A fun little oddity, this podcast does exactly what it says in the title, with USA Today journalist Shannon Rae Green telling her husband what is in the news. Her husband, Dusty Terrill, is a comedian somewhat unplugged from the daily headlines, so his take on what is going on adds a little light-hearted fun.
When she tells him about the latest update for the Galaxy Note phone, he wonders if it's going to stop make them exploding or just update them to being lighters instead of phones.
It's a fairly short podcast, only about a quarter of an hour, and very mellow. There's also a very nice recipe for a cough remedy, with a glass of bourbon with honey and lemon added to it and warmed. I prefer a similar one, without the honey and lemon or warming and merely raised in salute before drinking. Ideal for enjoying at Christmas parties.