FREE STORY: The Long Breakfast, by Brent A Harris

Brent A. Harris is a damn fine author, and a good friend too. He stops by the blog with a free story - an exploration of a Very Important Breakfast. Never mind any hobbits to the side saying all breakfasts are important, be they First or Second. Just grab a coffee, maybe a slice of toast, and settle down for an intriguing read. Oh, and speaking of intrigue? Be back here at the blog for a chat with Brent, in which he will reveal a Big Announcement (UPDATE: Here's that big announcement). Grammar be damned, I'm making big and announcement proper nouns for this. Now, here's that story... 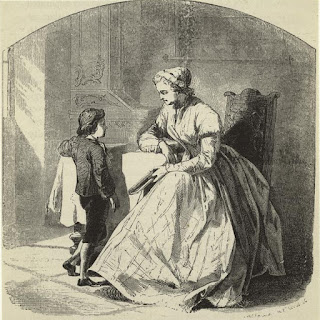 The Long Breakfast
Brent A. Harris

“Eat your porridge, Georgie.”
“I don’t want porridge, mother.” George scooted the bowl away. Liquid starch scalded him as it sloshed over. He wiped his reddened hand with a yellowed cloth from the table.
“You can run into the henhouse and get an egg, then. Or break off a chunk of bread. There’s still a bit of cheese left in the cellar,” she said, grabbing some grapes to hand over.
“I don’t want any of that.”
“What do you want?”
She set the grapes back down and raided the pantry.
George noted how his mother’s back never turned to acknowledge his bags he’d packed in a row by the door. “You know what I want. I desire to leave.”
He rubbed a hand over the rough edges of his pockmarked face, as if it would help him hide the lie, “I want to join the Navy.”
“Georgie, eat your porridge.”
“Mother.”
“From the beginning, I’ve said no. Yet I inquired around for your sake and, hearing about the horrible things that go on there, my answer remains unchanged.”
The porridge was cooling. George stood up from the table. “I’m fourteen now, mother.”
He knew he was right, he wasn’t a boy anymore, but if he wanted to be more, he had to go off and do something. He just had to make his mother understand.
“You’ll have a job, Georgie, but one that won’t take you far from the farm. “I worry when you go into the countryside on your own, meeting your end with some bear or Savage. There’s no way I’m going to let you go a world away.”
“But my brother and Lord Fair—”
“I don’t like him either. You spend too much time riding around their house, accompanying him and his wife. It’s his fault you’re out in the woods. I don’t care what they did for you, how much it cost him, I am your mother, I raised you. Not him.”
“He’s only trying to help since father…” Brow furrowed, George’s face twisted in a momentary lapse of frustration. “You’ve done so much for me, mother. If I go, I can return the favor. The prestige that comes with the Navy means I may marry well. I could support you as you supported me.”
George beamed, proud of himself for his fast thinking. In all their times bringing up the Navy, he had not thought to come at it from that perspective. But why not? Of course he would dote on his mother, for all their disagreements, for all her sheltering—she was his mother.
Still, if she said no, he didn’t think he could ever forgive her.
When he saw her shaking her head, George had to dig his nails into his palms to keep the tears back.
“The Navy is no place for a 14-year-old boy. Slosh-buckets, ruffians, scoundrels join the navy, but not by choice. It’s a punishment, Georgie, not a place to move up in society and make marital connections.”
“Lawrence said it’s not like that. I’d be a midshipman. An officer-in-training. I would oversee those wretches, I’d get three square meals and my own quarters away from the others.”
“Don’t you have that here?” she asked, looking at the neglected glop of oats. “Or is what I do not good enough? You’ve never loved me, Georgie.”
“Mother!”
“Well, I suppose that’s a bit harsh, but that’s how I feel. Besides, the farm needs you. I can’t spare—”
“We can get another set of hands, mother. I don’t want to be a farmer. I’ve never wanted to be a farmer. I want to be a sailor, see the world, do something meaningful with my life.”
“It won’t be the end of the world if you stay.”
George knew he had lost. But he couldn’t think of anything else that would change his mother’s mind. He supposed he could just leave—grab his bags, head for the door and get on the carriage. Today was the last day the frigate was in port. Today was the last day he could start his own life away from this miserable place, away from his miserable mother.
“I have to do this.”
His mother shot off a look that seemed to scream, “There’s no way. Absolutely not.”
And George prepared himself for the worst.
It took an extra moment or two to hear the words, “You don’t have to eat your porridge.”
Then, it took another moment for him to register the tears trickling down his mother’s cheeks.
Was that a yes?
But rather than filling him with elation, her words filled him with dread. I can go? The decision was his now. Can I go? And the question about what to do with his mother still had no answer. Somehow, in the back of his mind, he never really believed she would let him leave. Or was it that she knew I didn’t really want to go?
“I suspect you’ll forget all about me the moment you get on board. But if that’s what you want,” she said.
“What I want is to make you happy, mother. It’s not worth leaving if it will upset you.”
“Oh? Now you care about my feelings?”
“I… I care about you, mother.” George struggled with the right words. “Mother, if I go, I go because I am trying to be the man you want me to be.”
“Your father would have been proud. I’m sure.”
George couldn’t go. He absolutely could not. He stared for a long moment pouring through his thoughts over his porridge, considering what to say to mend their rift, to make things better, to get his mother to tell him she loved him. He could start by staying.
George Washington kissed a bitter tear from his mother’s cheek, whispered thank you, grabbed the bags from the floor and headed out the door to join His Majesty’s Royal Navy.
###

In 1746, George Washington’s half-brother, Lawrence, and his sponsor and friend, Lord Fairfax, secured a positon for him on a British frigate as a midshipman. His mother refused. But, what if the argument had gone differently and Washington had left to join the British Royal Navy?

Picture at top features George Washington as a boy with his mother.

You can follow Brent A Harris at his Facebook page here, or on Twitter, where you can find him as @BrentAHarris1
Posted by Leo McBride at 06:22