Alternative history has never been so popular, it seems! Leo McBride looks through the shows presently on TV and streaming that dip their toe - or leap with both feet - into the genre.

It's typical. You wait since Quantum Leap for a decent alternative history TV show and suddenly there's a glut of them all at once!
Alternative history has been something of a neglected genre when it comes to TV - oh sure, the odd episode here where the characters stumble on a time machine and get thrown into their past (I'm looking at you, Star Trek and Stargate SG-1), but as the core of a series? Not so much.
Yet here's a resurgence. In fact, it's kind of tricky to keep count. 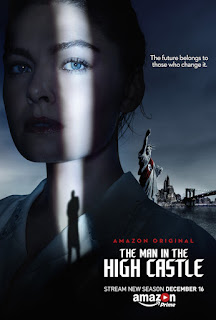 The Man In The High Castle
The new wave has been kickstarted by Amazon, and their big-budget, high-brow adaptation of Philip K Dick's The Man In The High Castle, just returned with its second season.
For those unfamiliar with the book or the show, it explores one of the classic (for which, read overused) alternative history scenarios - what if Germany won World War II? Now of course when Philip K Dick wrote the story, back in 1963, it was a far fresher idea. More importantly, he wrote a heck of a tale to go with it, envisaging the US as a land divided between the occupying superpowers of Germany and Japan, and leaving anyone with hopes of a free nation crushed in the middle. How good was it? Well, it won the Hugo Award the year it was published.
It's a hard-hitting tale - and the show picks up from that. The casual horror of the moment when what looks like snow starts to fall and one character asks what that is, only for another to say that it's ashes from burning geriatrics at one of the camps is jaw-dropping. It's not just the horror of what is happening, but the almost routine acceptance of such a thing that really hits home. Make no mistake, this is a show that will shock and disturb. 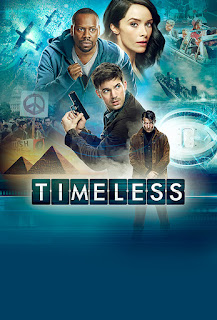 Timeless
Over on NBC, Timeless has arrived with a much brighter sense of adventure. The first half-season has just concluded, with more to come in the New Year, and by darn, it doesn't half have some style! The plot is fairly straightforward to begin with - a time machine has been invented, dubbed the lifeboat by its creators, and is promptly stolen by the possibly villainous, possibly heroic Flynn (Goran Visnjic, of ER fame). With it, he takes inventor Anthony Bruhl (played by the ever brilliant Matt Frewer), leaving a trio of heroes to give pursuit in the second machine.
It's a fun show, with the heroes - Lucy, Wyatt and Rufus, landing themselves in a succession of historic moments, such as at Lincoln's assassination, in Las Vegas tangling with a mistress of JFK, and more.
Flynn's villain works alongside Nazis to try to secure rocket technology, and seeks to obtain nuclear weaponry as he hops through time on his unknown mission - and yet at times it seems possible that he's aiming for some greater good. Could that be possible?
The team also find that whenever they return to the present, the effects of their travels in the past have caused changes in the world they knew, adding more personal stakes as they try to reset time to the way things were when they first left - or to undo the tragedy that had happened in their past.
The show also nicely illustrates issues across changing times - such as the issues of race that particularly face Malcolm Barrett's Rufus Carlin character as he notes that, being a black man, "There is literally no place in American history that'll be awesome for me."
An excellent show, here's hoping it does well enough to get renewed. There's something about it that reminds me of the movie The Rocketeer - humour, adventure, flair and all at a rip-roaring pace. Great stuff. 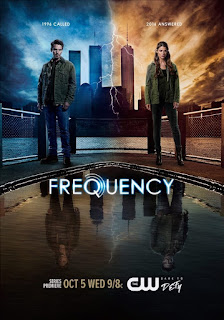 Frequency
Former Supernatural show runner Eric Kripke clearly has time on his hands - and his mind. As well as being the co-creator of Timeless, he's also involved with Frequency, over on the CW. This is again involving time travel, but revolving around a series of crimes and the relationship between a father and his daughter. If any of this sounds familiar, it is - it's riffing off the Dennis Quaid movie of the same name. Think of it as a buddy cop show across time, and you won't be too far wrong. 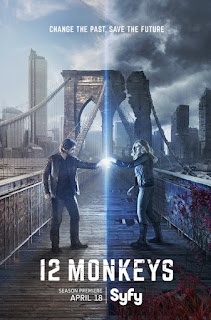 12 Monkeys
Flip your dial over to the SyFy channel and you have the apocalyptic 12 Monkeys, a take on the Brad Pitt and Bruce Willis classic movie. It's a dark and convoluted tale, where a virus has wiped out most of humanity, and a few huddled survivors in an underground base send an agent leaping back through time in an effort to try to find the crucial moment where the virus took hold so they can stop it and save the world. Or save a world, as those changes would wipe out the one they were living in, but that's a deal they feel is worth making. It's a darker show in many ways - not least the lighting. I tell you, the future could do with some more lighting technicians making it through the great plague.
It doesn't have the slightly bonkers, off-the-wall nature of the original movie - but that had Terry Gilliam in the director's chair, and few people in this world are as off-the-wall as he is. Still, a steady tale of conspiracies and time travel (and season one is on Netflix to catch up with). 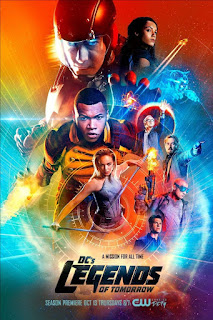 Legends of Tomorrow
The CW has had lots of success with Arrow and The Flash, TV adaptations of the DC comic book characters - and Legends of Tomorrow goes full tilt with the silly, creating a comic book time travel alternative history show, with a bunch of support characters from those other shows teaming up to try and track down a supervillain intent on saving the world, all with a helping hand from Doctor Who's Rory (Arthur Darvill, for all the world acting like he might be another incarnation of The Doctor himself). Darvill's character, Rip Hunter, is the driving force bringing the team together to begin with as he tries to alter the past to save the world in the future - but more particularly, his family. That's just the launch point, though, as accidents do happen in time travel, that lead to some very personal consequence for our heroes that they must decide whether to live with or find a way to undo them. As a show, it is complete nonsense. And it's really quite fun. Going back to the 70s is an excuse to raid the wardrobe department for the zaniest outfits they've got. Hopping to Russia breaks out grim Stalags and cod accents. Heck, the second season has zombie Confederate soldiers. But wait, just wait, for the four-show team-up that also ropes in nomadic show Supergirl and if you're any fan of DC comics at all, you will surely not be able to resist the fanboy/fangirl grin that you'll suddenly find on your face. Alt history of comic book history, though, that's pretty cool.

Alternative history in the future...
And we're not done yet - for there are two more shows with a time travel and alternative history tilt coming in the New Year. Fox is bringing Making History to its schedule, a comedy about two black men trying to change American history for the better, and ABC has Time After Time, based on the book and movie about HG Wells trying to stop Jack The Ripper.

Author Leo McBride has his finger in the alternative history pie himself - you can find his short story The Secret War in the Top 20 sci-fi anthology bestseller Tales From Alternate Earths on Amazon, available here. You can follow him on Twitter here.