BOOK REVIEW: Year of the Cat: the Thirteenth Realm, by Kendi Thompson; PLUS Holidazed by Robert Lee Beers 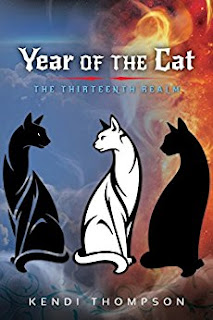 Year of the Cat: The Thirteenth Realm, by Kendi Thompson

There's something of an element of wish fulfillment about this tale.
A wife and mother finds herself transported one day from the humdrum of her morning coffee to the glittering possibilities of the thirteenth realm.
There she finds herself caught between two factions, each of which courts her to join their side ahead of promised dangers to come - mostly not featuring in this, the first book of the series, but hinted at for the future.
Instead, a great deal comes down to our heroine, Cat's, exploration of this world and reinvention of herself as she discovers powers she never believed she might have.
Finding herself caught between attraction for her mentor on one side, and the roguish leader of the opposing faction, she also finds herself falling... in love? Or possibly in lust.
Such explorations seem a little odd given the family she has left behind, which scarcely gets a mention after the lengthy history she mulls over that morning coffee. Once whisked off to the thirteenth realm, the family seems regarded more as a footnote, which sits ill at ease with me. I found it difficult to care about a character who showed so little care for those who had been most important in her human life.
As the story progresses, Cat faces tests of her ability to become an Observer - but in large part, this story follows the burgeoning relationship between her and her mentor, Heron.
In the end, not a great deal has happened, it seems - and I couldn't help but feel that with a set-up that might tip its cap towards the Amber of Zelazny or the Xanth of Anthony that it could have done with a good deal more substance to go with its style. In the end, it plays more like a more mature version of Twilight, a gossamer creation that doesn't quite take flight. 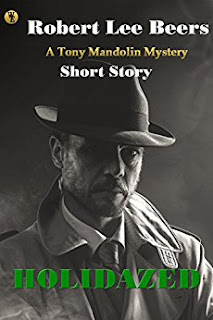 It can be rough over the holidays. Just ask Tony Mandolin. Settling in for a quiet meal with friends, he gets pulled in by the tentacles and tendrils of a ghostly mystery.
A police station is in trouble, so what's a grizzled private eye to do? That's right, try to ignore it. But y'know, that kind of trouble never goes away so it's Mandolin to the rescue. Or at least Mandolin to the investigation.
I'd tell you more, but y'know, Tony tells it better. So swing by his bar, pull up a chair - I hear the mac and cheese is good from the menu, and the beer is cold - and let him tell you a tale that would give that fella Phil Lovecraft the heebie jeebies. It's a doozie.