Matthew Harvey is one of the authors to feature in the first anthology ever published by Inklings Press, Tales From The Tavern. He returned to feature again in the third anthology, Tales From The Universe. This is the first time a story of his has appeared here on the blog, though - and it's a true pleasure to be able to host him. Here he presents the gentle, quicksilver beauty of Foxwife. 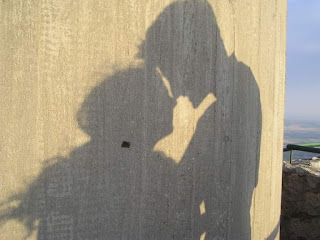 Each morning, the music was the same.  The delicate tone of a wooden flute flowed through the gardens, stilling the birds in their chorus and calming the breeze to silence.  As he had for many mornings, Shiro Tokuda went in search of the musician.  The formal gardens of his families’ estate were large, and it had taken him almost a week to find the artfully secluded grove.  Screened from the gardens by low sweeping trees, a small pavilion nestled close under its sheltering branches with a view away to the east.  The flute drew him on into the stillness of the early day, a greeting to the rising sun as its rays shone down on the little clearing.
He picked his way through the trees with great care, fearing that any stray noise might disturb the mysterious flautist and send them into hiding.  It had happened before, when a misstep had broken a twig and ended the song early.  He made no mistakes, emerging at the back of the open pavilion to finally behold the musician.  His breath caught in his throat.  The dawn light played across the figure of a young woman, dancing on the folds of her kimono like fire.  Midnight hair flowed unbound as far as her waist, and shone blue in the light.  He couldn’t see her face, but Tokuda knew she would be beautiful.  He stood there, entranced, as the music flowed from the simple flute at her lips and curled about him.  All sense of time fled, until the sun climbed above the horizon and the song ended.
His contented sigh broke the silence which followed, and the young woman, as beautiful as he had thought, turned to stare wide eyed over her shoulder.  There the startled gaze of a wild creature in her look, a deer sighting a hunter, which made the young man’s heart flutter.  She rose impossibly quickly, taking three steps before he could even voice his surprise.  He hurriedly stepped after her, one hand reaching.  “Wait, please!”  She had stepped from the pavilion when she stumbled, sprawling with a pained cry.  She half rose, turning to look at the traitorous ground, then glancing up, fearful, as Tokuda drew close.  She didn’t cower, but there was a shivering tension about her, frozen in mid-flight.

Feeling suddenly awkward as he towered over the slight woman, Tokuda knelt.  Silence stretched as she stared, eyes wide in a porcelain pale face.  He forced himself to bow, and break from that uncomfortable gaze.  “I’m sorry.  I hadn’t meant to startle you.  If you’re hurt because of me, please let me make up for it.”  She was silent.  He looked up, and was glad to find she seemed less afraid of him now.  Her eyes still bored into him, something about them raising the hairs along his neck.  She spoke, in a voice as musical as her flute.  It was a few moments before the sense of them penetrated.

“You stood on my shadow. And now you are kneeling on it.”  He blinked, glancing down to find he was indeed kneeling in her shadow.  He looked again.  What she had said was entirely accurate - her shadow, thrown long by the early sun, passed beneath him and showed as a darker shape where his own shadow crossed it.  She arranged herself more comfortably as he studied the shadow eerily trapped beneath his knees.  Even stretched as it was, there was no mistaking it.  With pointed ears and a waving tail, the sun threw the shape of a fox behind her.  He blinked again, noting not one, but four lazily waving tails in the shadow-shape.  He looked up, astounded, to find her gaze downcast, and a flush showing bright against her pale cheeks.

“Miss?”  She started, eyes flicking back up to his, and now he knew what had seemed so strange about them.  Golden-amber met hazel, and before the woman’s intensity could steal his voice again he turned to look away, over her shoulder.  “I am Shiro Tokuda.  This is my families’ garden.”  She looked away as well, avoiding staring at his face.  “I am called Mi.”  He couldn’t help a smile, and she flushed again.  He asked, amused, “You are truly named ‘beautiful’?”  She looked away, face aflame “My mother named me so.  It is not a joke.”  He bowed his head in apology.  Unthinking, he added “It’s true, as well.”  He looked up to find that wide eyed stare on him again, and now it was his turn to flush and duck his head in embarrassment.  He looked back, to find she was smiling.  “That’s very kind.  Thank you.”  He smiled, feeling foolish as his heart raced.

He realised, suddenly, that her shadow was still trapped beneath him.  “Oh, excuse me, Miss Mi!”  She looked on confused as he rose, stepped to the side and sank back to his knees.  He explained “I was still kneeling on your shadow.”  She straightened, realising her freedom, then stood fluidly and in no hurry this time.  Feeling ungainly he hurried to his own feet as she offered a bow.  He returned it, aware that this was a parting.  She turned, stepping towards the open eastern lands and he lurched a step after her.  “Will- will you still come here to play?”  She stopped, looking back at him, light and shadow playing across the fine lines of her face.  “I would like to.  If I am welcome in your families’ garden?”  Heart thumping he bowed again, deeply.  Feeling daring he added “If I am welcome to listen, then of course!”

He straightened, unsurprised to find her gone without trace.  He smiled when he heard her voice from somewhere among the trees. “Take care not to kneel on my shadow next time.”

To find out more about Matthew Harvey, you can follow him on Twitter - which he has recently joined - here.