BOOK REVIEW: The Cartel - The Apprentice Volume 1 by EG Manetti 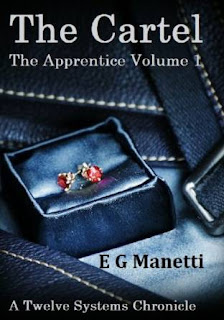 The Cartel: The Apprentice Volume 1
By EG Manetti

I'm so very far out of my comfort zone with this book by EG Manetti - but in many ways, that may be the point, for her creation is a world where the uncomfortable has become the commonplace.

Lilian lives in a future where cartels control the worlds but life has become rigid and formal. Even competition between the cartels is stagnant, with little change in their rankings over the years. By family circumstances, she is forced to become an apprentice to a master in one of the cartels. That apprenticeship is more slavery than anything else, though, as she is forced to obey all of his instructions - and give herself mentally and physically to his every whim.

Fortunately for her, she looks forward to the sexual contact that comes with this scenario - though it very much is in the realm of dominance and submissiveness, with her compelled to satisfy his demands. This sat very uneasily with me - as while she might look forward to these encounters and enjoy them, if she didn't then she would still be compelled to go through with them against her will. Worse, her position is that she would be unable to speak out in this world that expects it of her.

Indeed, the world she inhabits offers little in the way of opportunity for her to express herself as she might wish - constrained as she is by the rules of being an apprentice in this very mannered society that values obedience over expression. Her inner dialogue wrestles constantly with what she is allowed to say, and the consequences she might face if she says or does the wrong thing.

That said, Lilian's sharp mind soon proves to be a boon to her master, as a plot begins to unravel that could affect the heart of the cartel itself. Meanwhile, her master sees the chance to use her intellect as he seeks to change the rigid structure that has endured for generations and advance the cartel itself to overtake its rivals.

The writing in the book is solid - though some might find it repetitive at times, Lilian constantly falls back on certain mantras that keep her focused on getting through the situations she faces. In this way, she expresses her core inner values, her true identity in a world that would have her be something else, and that would regard her as close to nothing while doing so. It's an uncomfortable read, in the manner that The Handmaid's Tale or The Remains of the Day could be uncomfortable - while the sex scenes are frequent and detailed, yet often rather passionless.

In the end, while I have to admit this is not the book for me, I have to say it is well done. If the above material sets off your trigger warnings, though, stay clear. It's not shy about the areas which it explores.