PODCAST REVIEW: Top of the Pods - the top 5 podcast shows this year

As previously published in The Tribune Weekend section of December 18.


With the end of the year approaching, this week we take a look back on the podcasts we've reviewed this year - and pick out five of the best. It's been a tough task choosing some of the best of the year, and we've only listed shows that are still running, which has eliminated one or two across the course of the year. Without further ado, our countdown begins…

You have to pay attention if you're listening to Freakonomics, but they cover subjects that are worth paying attention to. They take subjects and look at them a different way, at the consequences behind how things operate, and the unintentional effects of economic decisions. For example, the podcast I reviewed this year looked at private healthcare, and how the financial emphasis changes the way in which healthcare operates - keeping patients in hospital more often, for example, if  beds are available, because you can charge for that and insurance will pay up. They tackle a broad range of subjects - but always with a forensic eye for detail and asking the question "What does this mean?".

Love + Radio brings stories of the unexpected. The goal of the site is to present interviews with unexpected subjects. It illuminates the lives of everyday people, and discusses their reasons for doing the things they do. There's the interview where a woman was catcalled by a man as she walked past him, so she picked up her microphone and asked him why, leading to an intriguing conversation exploring who this man was and what his life was filled with. There's another chat with a man who runs a strip club from his home - and why. It's brilliant stuff, that looks deeper than the surface of our everyday life. 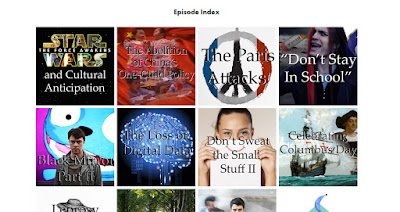 Also looking more in-depth at subjects is Stride and Saunter. Covering a range of subjects, the hosts, Hector Marrero and Kip Clark focus on a single issue and its implications. They've discussed philosophy and body language, reviewed other podcasts and tackled cultural appropriation. That might sound heavy going, but the show keeps it accessible, and all within the context of two people chatting. Not easy to do, but somehow they do it very well.

I've covered a few fiction podcasts over the year - but Pseudopod remains my favourite. It's a website featuring horror stories - partner podcasts cover fantasy, science fiction, young adult fiction - and while the audio readings themselves are top notch, what I really like is that episodes also feature a mood-setting introduction and a discussion afterwards of the themes featured in the story. Many years ago, on the BBC, there was a fantastic series of movies as part of their Moviedrome season, introduced and discussed by director Alex Cox. Pseudopod is the Moviedrome of horror podcasting. It's like those moments sitting chatting with friends about what you loved in a story, all done with keen insight into the issues laid bare by the writer, and by the actor reading the story aloud. 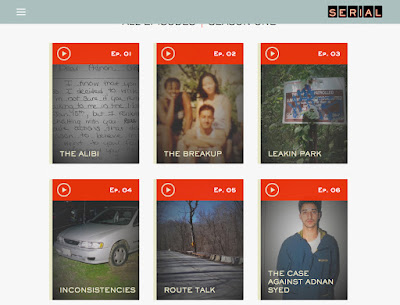 The first series of Serial was a phenomenon, going beyond the usual audience of podcasts to draw people in. It was, fittingly for its title, a serial of connected podcasts, all focusing on reporter Sarah Koenig's investigation of a single criminal case, that of the murder of 18-year-old student Hae Min Lee in Baltimore. Her boyfriend, Adnan Masud Syed, was jailed for the murder. But there remained loose strands in the investigation, strands that Koenig picked away at, revealing potential flaws in Adnan's conviction. It's fascinating, revealing the inner workings of the justice system, and how it ends… well, I wouldn't want to spoil it for those who have yet to listen. But do listen. You'll be hooked, and wanting to play the next episode right after the last. Series two has just begun… and we'll be looking at that in our next review.