They exist in museums. They exist behind glass. Bodies preserved over centuries after falling into peat bogs, the causes of their deaths clear for all to see. Join Leo McBride as he offers a free short story, exploring the world of the bodies in the bogs. 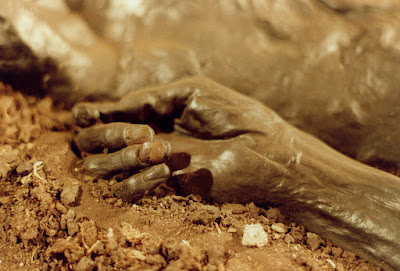 THE clay man lay unmoving, imprisoned behind walls of glass for endless lines of fascinated onlookers to gawp and point at. He did not stare back, his eyes plucked away long ago by the ravages of nature.

His skin was withered, mummified by the dirt of the bog. Every detail of life that had marked him lay exposed here to the world. The cut he had received in his fight with Fergus in his youth was there, sharply raised on his thigh. The scar from the battle against Ui Domhaill fled down one side. Then, of course, there was the ragged hole across his throat from his murder. His jaw was stretched from his slow, eternal scream.

A week before, a poet had arrived and sat for a few days studying the corpse, as if trying to discern the nature of life by looking at the nature of death. The corpse had looked blankly back, unmoved. Finally, the poet had left, perturbed, preoccupied.

Now the poet was back, standing directly in front of the glass, with his breath slowly fogging up the plate. He stood there, his glasses perched precariously on his nose, eyes flashing behind them. The clay man did not react. He remained unmoved as ever, his only motion remaining the aeons-slow process of decay.

Yet another day brought the poet once more, sitting across from the glass, occasionally jotting down in his notebook the detail he thought so essential.
The clay man cared not. What understanding could be gained from the body of a man dead these hundreds of years, his throat ripped greedily open and his every drop of blood spat into the land that his killers stole? The land that had swallowed him whole and preserved him for centuries – that land that could not be called anything but his own, he who had bled into this peat. And now he had been brought here to this glass cage, for this pretender to understanding to look upon. How could he understand when he had only sampled life? The clay man had seen both life and death. He endured. This flimsy writer would be consumed all too quickly by maggots and worms.

But still the poet persisted. He returned time and time again. He came once with a young woman by his side. She smiled and tried to be polite to him, but he became distracted and irritated. Her presence somehow disturbed his imagined communion with this image of death. She did not return with him again. This spectator was different from most of the others. Most of them came along, stared and pointed once or twice and shuffled out. This one, there was more to him.

He reminded the clay man of another. Fergus. Fergus had been wild in his youth, it was true, but as he grew, he had become more and more withdrawn from the world. He saw everything through different eyes. To him, everything was filled with something more, something greater than could be seen at first. It had been no surprise when Fergus had cast off his wildness and left the village. He returned only once after that. In his wanderings, he had become a bard. He weaved tales for the village, but his reception was poor. This was, after all, Fergus. Little Fergus. How could anyone take him seriously when they remembered the time when he stole Suilleabhain’s apples, or when he slipped and fell in Ui Dalaigh’s pig muck? No. Fergus had said his final goodbyes to those who had sat and listened carefully to what he had to say, and left. The clay man had accompanied him as far as the ridge, and as they walked, Fergus spoke.

“My friend, I tell you that there is more to this world. In all things, there is something more than flesh and blood and bone. We all have spirits in us. Essences. Tell me, my friend, where do they go when they die?”
“What makes you ask that, Fergus? You know that they go to the otherworld.”
“I don’t know. Do you? Have you ever died, so that you can find out? No. Those are just tales.”
“Then maybe they just get eaten by the maggots just like everything else.”
“And then the maggots get eaten by the birds, and the birds get eaten by the wolf, and then we eat the wolf. Does the spirit carry all the way around too?”
“Fergus…”
“Think of it, now. Think what we would be made of. My heart beats with a king’s spirit, my fingers play with the power of the greatest bards. The very thought makes us gods. We do not die – we simply become the foundation for the years to come.”
The clay man stopped. They had reached the ridge.
“And what of our thoughts, Fergus? Do they last? Is that thought of yours the same thought some priestess had 50 years back? And that it’s mere luck that means its time has come around again?”
Fergus turned, the flash of his eyes brilliant and still with that faint wildness there.
“Perhaps so,” he said. “Perhaps so.”
The two stood and faced one another on that ridge, knowing this would be the last time they would see each other.
“I don’t understand you any more, Fergus,” said the clay man. “No one here does.”
“I know,” Fergus replied. “But then I don’t understand this place any more, either. This world. The road will teach me, I hope. The road and where it takes me.”
Silhouetted against the top of the ridge, the two embraced and then parted. The clay man watched as the distance between them grew, as Fergus became smaller, ever smaller. And just for a moment, he thought he saw Fergus look back.

For several days, the poet did not return. In the meantime, the crowds came and went. They stopped. They pointed. The clay man, as ever, did nothing. But then came a day when the windows of the museum rattled in the rain and the wind and the halls stood empty. Empty but for a poet, his raincoat damply coiled on the seat next to him, his glasses steamed up from the change in the air. There was something different about him this time. No longer did he jot absent-mindedly in his notebook. Now his writing was ferocious, an unstoppable scrawl. His eyes flicked between his words and the case containing the clay man, back and forth. What brought him here? What was he seeking? What could the clay man tell him? What could he give the answer to?

The writing stopped. The room was quieter now. He put down his pen. Stood up. He advanced to the glass encasing the clay man, his gaze meeting the other's sightless eyes.
"Which are you, my friend? What do you see in your death? You lie here, immortal, immune to Time. What has your spirit seen? What happened to you when you died?"
The clay man looked back, without understanding of this man and his modern tongue. What did he seek? Was he like Fergus? Always trying to understand Death, while still remaining alive? Foolish. The clay man knew that. But still he whispered soft words that slowly fogged the glass. Foolish man, don't you know that Death is the greatest prison? An eternal prison, where your spirit lies trapped, gazing out at who knows what the eternities bring? Of course you don't know. You never will, not until the day that you die. Only then will you know. But time will bring too many changes. Even now, you sit here in this great hall, in this world of wonders. I wish I could warn you, you who seek to understand. When Death comes, be sure to close your eyes.

The poet left that night, as they locked the doors. He never returned. But the clay man remembered him. Of all the people he saw in his hundreds of years, he remembered him. And as Time wore on and more centuries slowly passed, and thousands upon thousands more gazed and stared, he remembered another. He remembered Fergus. Fergus with his eyes always searching for an answer. He thought of those eyes in another head. He knew those eyes as the eyes of the poet, still searching.
"And then the maggots get eaten by the birds, and the birds get eaten by the wolf, and then we eat the wolf. Suppose a woman eats some of the flesh and gains part of that spirit. If she has a child, who's to say that the spirit of the child isn't that of the man, come full circle."

The picture shows The Grauballe Man, a bog body uncovered in 1952 from a peat bog near to the village of Grauballe in Jutland, Denmark.
Posted by Leo McBride at 23:02