I've been taking part in this year's NaNoWriMo. Not a huge amount done so far, but plugging away. Here's the first chapter of this year's entry. The prologue is here. Nag me on Twitter here to write more words! 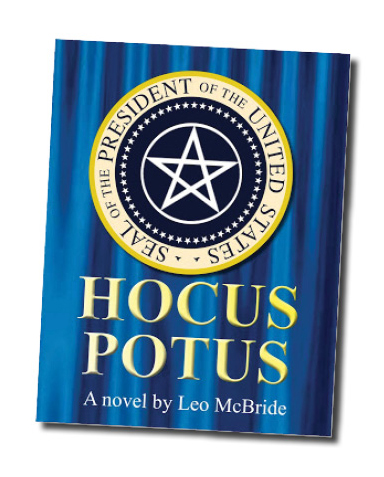 As witches went, Juniper tried to avoid the stereotypes. Sure, she had a cauldron, where else to make the potions? However, she had a polite giggle rather than a cackle, there wasn't a wart or boil in sight – and goodness help her if there was, it would make the Presidential Make-up Team faint. There was, though, one thing that fit the image. She could shriek.
“WHERE IS MY CHIEF OF STAFF?” she demanded of the hapless secretary outside the office that was notably devoid of the object of her outcry. The reaction was instant, not least because the secretary had not seen her coming. He was sitting down, an error in itself, so he exploded into the air in a gangly mess of elbows and panic. Yes, the shriek worked wonders.
“Where is Algernon?” she asked as the secretary pulled his flailing limbs into a semblance of shape again.
“Ah... Madame President... ah...” he gasped, eyes searching around.
She placed her knuckles on the desk and leaned forward, eyes narrowing. Very carefully, deliberately, she repeated, “Where. Is. Algernon?”
The secretary swallowed. His eyes swiveled. He gulped out a single word.
“Congress.”
Juniper smiled. “Thank you,” she chirped, then whirled on the heels of her shiny red shoes and crisply marched out of the office. Molly fell in alongside her, matching her stride.
“You don't have to terrify that poor man,” Molly sighed. “He's nervous at the best of times when working with Algie.”
“I know,” smirked Juniper. “It's just it's so easy. Besides, I really did need to know. It's an hour to the vote. If Algie's over at Congress, he must be making sure everyone is doing as they were told.”
Molly shrugged. “I thought you'd already taken care of that. A little potion here, a little notion there...”
As they breezed back past the cramped desks of the West Wing, large men in dark suits at their heels, Juniper lowered her voice. “More notions than potions this time,” she said. “Though there were a few swing votes that needed a drop or two in their brandy at last night's late session. Petersen and Maloney, Wilbur and Awford should all be thoroughly supportive today.”
“Do you think...” Molly began, a cautious note in her voice, “I mean, do you ever wonder if.. we're doing the right thing?”
Sweeping in through the door to the Oval Office, Juniper glanced back at her press secretary. “Of course,” she said, cocking one eyebrow. “We're the good guys.”

The next hour flew by. There were papers to sign and hands to shake, never enough time and phone calls to make. Sometimes it's like being trapped in a Dr Seuss rhyme, she thought. Except Dr Seuss rhymes never talked about soldiers or debt, or the things senators wanted so their needs were all met. Wait, she thought again, once you start rhyming, you can't stop.
There were papers on the plans for the expansion at the Library of Congress – though it might be nice, Juniper mused, if some of the members did more reading. There was a briefing on the tiniest of shifts in the Secret Service protocol that grim men had mulled over for three months before asking her to say yes. A couple of ambassadors stopped by for handshakes and photographs they could show back home. And there was no call from Algernon.
Molly stopped by with press clippings of note, and rolled her eyes as she told how a reporter was asking about Juniper's husband's golfing trips. Of all the things they could ask about, she said, and they're busy asking about Brian.
Then Molly turned up the sound on the news from C-SPAN as the members of the House started their vote. “Any time now...” she said.

“Any time now,” Molly had sighed, as the election count came in. Back then, they were in a hotel suite, a ballroom below packed full of supporters waiting for the crucial races to report in.
Molly had constantly been at Juniper's side through the election race, at every town hall meeting, at every local constituency gathering. She'd seen every handshake, every little piece of glamour cast to persuade any lingering doubters.
But still, Juniper didn't know for sure if it would work. After all, no one had ever tried using magic to convince people to vote for them before. She didn't know if the glamour would last long enough to carry the person she cast it on into the voting booth and to mark the X next to “Arkwright” on the form. She didn't know if the TV debates would count against her with the inability to cast spells to influence the viewers. Instead, she sipped her apple zest before the cameras rolled and persuaded the reporters afterwards that she had won, which they duly wrote.
So there were nerves as she sat in that hotel room waiting for the news of the vote, as 24-hour news channels gushed eagerly over every poll, over every early set of returns.
And in the middle of it all, Juniper felt something very odd. She felt... unsure.
She had excused herself for a private moment and then, in her own room in the suite, she had slid out the suitcase that she insisted on carrying everywhere herself, despite the many hands of helpers. She laid it on the bed, popped it open, and lifted out The Way of Odd.
It was more battered than ever after all the years she had carried it around. From school bag to college backpack to bulging briefcase to the suitcase of a presidential candidate.
She sat with it on her lap and leafed through it, though she knew it like her own reflection. She knew the worn-away name on its side, she knew the chunk bashed in its side from a locker slammed on it by a clumsy college-mate. She knew the space where five pages were missing and always had been since she first received it from Molly. She finally settled on a page with a simple spell, a spell to soothe and calm.
I want to be commander-in-chief, she thought, I ought to be in command of myself.
And the room was suddenly still. After all the pell-mell of the campaign trail, after the tiredness and exhaustion, the sleeping on buses and planes and flashing smiles to mask the weariness when cameras were around, here she was at peace. Blissfully, beautifully calm.
And that's how Molly found her a few moments later when she burst through the door with phone in hand.
“Here it is,” she shouted as champagne corks sounded behind her like a fusillade of cannon, backed by party streamers and cheers. “This is the call!”

There was a knock on the door and Mrs Eudelay entered the Oval Office, Juniper's private secretary. An older lady with gentle manners but firm heels when you tried to cross a line you could not cross, she was the watchdog at the door, the honey scent to sweeten visitors. Her lantern eyes nodded towards Juniper. “Mr Crowtree on line one,” she said in a low voice.
“Algernon! At last,” said Molly.
Juniper smiled. “About time we got the confirmation,” she said. She made her way around the desk she had been leaning on, looking at the presidential seal in the middle of the carpet as she reminisced about that champagne cork day. She sat down, tapped the speakerphone into life and called out.
“Algernon, thought you'd fallen down a well. How much did we win by?”
There was a cough at the other end, a spluttering as Algernon cleared his throat.
“Madame President, well, you see, the voting began 20 minutes ago and...”
“Out with it, Algernon. It's been a busy day. What's the margin?”
“Ahh. Yes. The margin. Fifteen, Madame President.”
Juniper leaned back and smiled. “Fifteen. That'll do. Thanks, Algernon, tell everyone good job and well done on the win.”
Algernon coughed again. “Ahh. Yes, Madame President. I will. Only... here's the thing...”
“The thing? What is it, Algie?” she asked.
“We didn't win by fifteen.”
She frowned. “What do you mean? You just said the margin was fifteen.”