Writers Brent A. Harris and Leo McBride in conversation

Authors Brent A. Harris and Leo McBride - both featured in fantasy anthology Tales From The Tavern - joined Inklings Press for a chat about the writing that inspires them, and what's been on their bookshelf lately.

Hi to you both - and welcome to the chat. You're following on from your fellow writers Alei Kotdaishura and Ricardo Victoria, who had a chat with us a couple of days ago (See here) and we're pitching the same questions your way. So, without further ado, seeing as the anthology is fantasy fiction, if you had to pick one, which fantasy novel would you say left the biggest impression on you?

Brent: I stumbled around the library one time years ago as a kid, looking for more fantasy after binging Lord of the Rings and Choose Your Own Adventure books. What I found in the fantasy section (although one could argue that it belonged in sci-fi) made a profound impact on my life. It was Harry Turtledove’s A Different Flesh. What if Australopithecus had survived and settled the Americas? How would that have impacted later European settlement? More importantly, how would the discovery of a distant cousin redefine how humanity saw itself? Basically, the ‘What if’ scenario…opened a whole new world to me (pun intended). 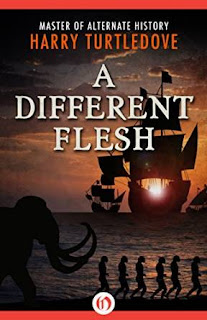 Leo: Darn, that sounds like it should be on my to-read list! I think I probably nudged through a similar literary path as you, working my way through Lord of the Rings. I'll throw in a shout for the splendid Earthsea trilogy - well, quartet now? Quintet? That's Ursula Le Guin and it's marvellous. But the fantasy novel that left the biggest impression on me would be Lord Foul's Bane, the first book of the first Chronicles of Thomas Covenant, by Stephen Donaldson. 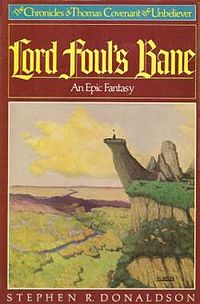 What was it about that novel that made an impact?

Brent: I began to see potential for limitless possibilities. This is especially important as a writer. As Robert Conroy once said, to paraphrase, you’ll never run out of ideas. I must have read a dozen alternate history books that year, from Turtledove to Conroy to Len Deighton, to name a few. There are some fantastic authors in the genre that ask some real mind-bending questions.

Leo: I'd come to Donaldson after reading the likes of Narnia and Lord Foul's Bane blows the wardrobe doors off that whole genre of characters from our Earth stepping into another mythical realm. For those who don't know, the lead character, Thomas Covenant, is a leper who gets knocked over in a car accident and wakes up in The Land, a fantasy landscape that he spends a lot of time wrestling with internally as to whether it is real or not. That has consequences in the fantasy land, because he acts in ways that just absolutely make you hate him. To this day, I've never found a book in which I hate the lead character as much and yet am so totally driven to follow the story and hope that the character succeeds.

Is there a fantasy writer whose style you aspire towards?

Brent: Ward Moore. Undoubtedly. He set the bar high with his 1953 novella, Bring the Jubilee about a post-war South that won the Civil War – until the historian writing about it decides to time travel back to the pivotal moment that defined the war — only to inadvertently cause our very timeline you and I live in right now. Such a good story, not a word wasted, nor pages of exposition given. A true classic of the genre. 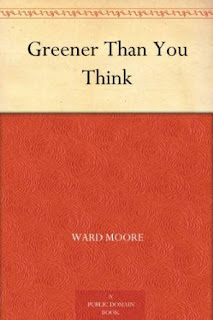 Leo: I'm not so sure I aspire towards him because I couldn't even begin to emulate his talent, but Ray Bradbury is the sunrise and sunset of my love of writing. Obviously, Fahrenheit 451 is magnificent in its ideas but it's the way he seems to make words dance that bewitches me. Every time I read his words, I fall in love with them. There's one particular passage in his semi-autobiographical story Green Shadows, White Whale - which draws on his time living in Ireland working on the screenplay for Moby Dick, the version that starred Gregory Peck. In this passage, which runs for three or four pages, the lead character is calling on a woman who has long been a friend, sometimes been perhaps more, and has always hosted the most fabulous parties at her grand home - and in this passage, the lead character walks towards her across the lawn in front of the house and reflected in its windows he sees all the possibilities of different ways things could have gone, how their relationship could have travelled a different path, and so on. And yet by the time he reaches her, that glimpse of possibility has resolved and he understands that this is exactly where he should be, exactly how they should be - and it's an exquisite piece of writing. I'm still learning the steps, but one day I'd love to make those words dance too. 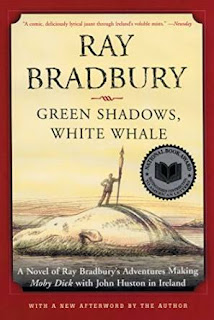 Whose work are you reading at the moment?

Brent: In Fantasy, I’m catching up on A Fire of Song and Ice. I read Game of Thrones before the tv series, but honestly, the tv show has done such a great job of encapsulating it, that I didn’t go back to the books until now. I’m on book 3, near the infamous Red Wedding. Mostly, I’m reading reference books in research of my second Alternate History book. 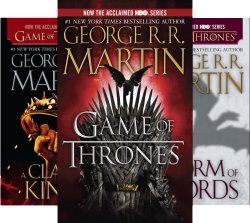 Leo: Malus Domesticus, by S.A.Hunt. I encountered the writer through Twitter and he's so clearly committed to his writing process that I simply had to give it a try. Glad I have, enjoying it thoroughly so far. It's a punk horror road movie about a shaven-headed heroine living out of her van and covering up her lifestyle of hunting witches with a supposedly fake YouTube video documentary series about it all. Delightfully-measured balance of gruesome and heartfelt so far. 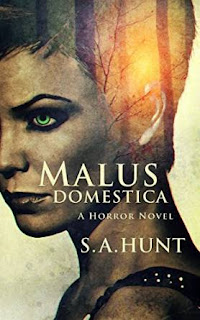 What's the best piece of fiction you've read this year?


Brent: The Hobbit, for the simple reason that now I get to introduce new worlds to my children. We read a few pages together every night. What could be better than that?

Leo: I'm a little jealous of Brent, not quite up to The Hobbit in reading age for the next generation yet! I've been doing a little catch-up with older fiction this year, so the best I've read I think would be To Kill A Mockingbird, the Harper Lee classic - I think I was the only one in my crowd of friends that hadn't read the book, and they were all getting excited about the sequel so I figured it was about time I did. It's brilliant, of course, but you really don't need me to tell you that, right?

I think we all could have told you that! Thank you, both.

Tales From The Tavern, featuring Ricardo Victoria and Alei Kotdaishura alongside three other others, is available from Amazon here.