FREE STORY The Intruder by Brent A Harris

Brent A Harris is a fellow author, a comrade, a colleague, a man whose pen sparks with wit and glides with elegance. He guest blogs here with a story of horror, a story written with that same pen dipped in blood... 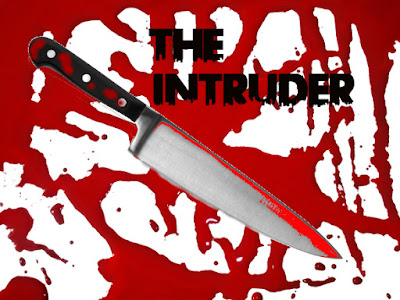 By Brent A. Harris

Based on an original story idea by Ricardo Victoria

The knife. I need to get to the knife. It was the same knife Beth and I used to cut our wedding cake not long ago. And it was there, on the counter of our home… just out of my reach. There was someone in our house. The intruder was dressed all in black, though his face was not covered. Beth, was in her bathrobe. Alarm screamed across her face. She was near tears. My attention was drawn to a bruise across her left check which contrasted sickly against her pale skin and blonde locks. I had to get to that knife.
The man in black drew towards me. I was caught stuck between the microwave and toaster, unable to get to that knife. The intruder must have felt my presence. I was frantic now, trapped as I was in the kitchen, my wife beyond my capacity to save. But I had to do something. I suppressed my fear and replaced it with a growing, boiling rage.
I burst forward, leaping through the air towards my assailant. I seemed to hover over him. I would have collapsed down on him, if it were not for a quick stab of white-hot pain. It crackled over my whole body. I felt shock and then went still for a moment, my anger bursting forth, overcoming the agony until the whole room started spinning out of control.
The man in black must surely have stabbed me, but with what, I could not tell. The lone lightbulb which hung on a cord above him started to swing wildly, spotlighting the dim room’s cheap particle-board furniture. I swung along with it. Then, the lightbulb exploded, showering the room in luminescent sparks while glass shards stabbed into the yellowing linoleum.
I felt myself suddenly drawn into the living room, static sparking around me from the shaggy brown carpet. I tried to catch my breath as my hand slammed against the glass of the tv set. Beth and the intruder jumped at the noise. The soft brilliance of the static danced across the living room as I looked outward onto the scene.
Beth stood in the middle of the cramped room. Somehow, she had managed to clutch ahold of her rosary beads. I saw a streak of red cut across her forearm. The wound looked vaguely familiar to me. Then, she moved her eyes toward the tv screen. They were wide with alarm. The man in black approached again, this time, holding some sort of weapon—I think—stretched out in his hands before him.
“Inside the tv!” I heard my wife cry out. The man in black snapped his eyes towards me. The tv clicked off. For a moment, I was lost. But I found my way and then discovered that I was finally beside my wife. I clicked on the light to the lamp, but to my surprise, she jumped with fear. She had no reason to be afraid of me. Still, she looked at the lamp long and hard for a moment… then she picked it up. It started to flicker wildly in her hands.
“He’s here!” She cried out again, “inside the lamp!” The man in black began speaking, although I did not understand the words he said. I only wanted to get to Beth, but an unseen force prevented me from reaching her.
Beth took the lamp and raised it above her head. She threatened to throw it down. That was our lamp, our wedding gift, just six months ago. Up until a few days ago, we had a matching set. They were the nicest things in the house. Beth had broken one. I remember the cut on her arm, her falling onto it as if pushed. Now, she threatened to bring that second lamp crashing onto the floor. As she stood there, with the lamp overhead, the intruder opened a book that had been held tightly in his hands and began to chant again. I looked on in confusion.
A swirling vortex opened beneath me. I felt its pull. I used every ounce of my strength to remain free. The man in black continued his assault on me, his words growing louder, more focused and commanding. Sweat soaked into his starched-white collar. Every electrical device in the house flickered on and off, in rapid succession, triggering alarms and noise, and battering Beth and the man within a cacophony of light and sound. But that did not stop them.
Beth brought the lamp down in one smooth motion, sending it cascading into fragments across the carpet and that was it, the vortex had me. A whirlwind of rage swirled around, sucking me into the tempest below. But I couldn’t let her go. She is my Beth. She doesn’t belong to anyone but me. I know my anger sometimes got the better of me, but I loved her. I won’t harm her. Not ever again.
I didn’t mean to hit her the other day. I didn’t mean to explode into rage.
“I saw you talking with that guy again!” I yelled, shoving her into the lamp. It broke as she crashed into the floor, a piece of porcelain cutting through her arm. I didn’t mean to do it, just as I know she didn’t mean to race into the kitchen as I chased her. She didn’t mean to grab that knife—I know she didn’t—as it slid into my heart just as it had sliced through our wedding cake. It was all an accident. I can forgive you Beth, just don’t make me leave you!

“I love you…I love you,” I wailed as I was sucked down into the bottomless pit. The last thing I saw was the look of relief on Beth’s face as I disappeared into the depths below.
© Brent A Harris
All rights reserved