Originally published in The Weekend section of The Tribune. Available online at: http://www.tribune242.com/photos/galleries/2015/sep/11/09112015-weekend/ 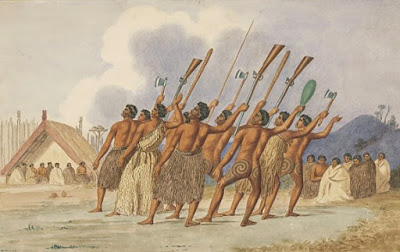 The haka is a traditional genre of Māori dance. This picture dates from ca. 1845. (Merrett, Joseph Jenner, 1816-1854. - Australian National Library)

ATTITUDES towards culture are under the spotlight this week in our podcast review – starting with Stride and Saunter looking at cultural appropriation.

While it may sound like a podcast for those loving to go out walking, Stride and Saunter is a podcast taking a mosey through a host of different issues – recent episodes have included a review of the excellent Serial podcast series, covered here previously, and an analysis of body language. Hosts Hector Marrero and Kip Clark are explorers of philosophy and communication – and their approach is very well shown by their recent episode on cultural appropriation.
The culture in the spotlight is the Maori culture, and the appropriation is that of the haka, the traditional war cry and dance that has found its way into pre-match performances by the New Zealand rugby team as well as a number of tourist-targeted displays. Is it fair for the haka to be performed by those for whom it does not have a cultural significance? What does that mean for the culture?
Crucially for the discussion, the hosts are talking about appropriation from the outside looking in – but they are aware of that and frame the debate fairly. That's not an easy thing, it's easy to be accused of pushing yourself into a debate that is not your own in these circumstances, but that's a trap the hosts neatly avoid while thoroughly discussing a subject that has resonances in many other locations around the world.
This is a show to provoke thoughts, to stir debate and never shying away from difficult subjects. Time well spent.

The tension between different cultures within the same country has also been at the heart of recent episodes of Death, Sex And Money.
It's been ten years since Hurricane Katrina ripped through New Orleans and the podcast – an offshoot of radio outlet WNYC – visits the city to examine the aftermath and to explore where the city is now.
Host Anna Sale interviews a number of people from around the city – including medical staff, the coroner, a gay man who performs as the “Queen of Bounce” and more. There's a recurring theme of things not having pulled back around from the storm's effects yet – asking why this hasn't been rebuilt yet, why that clinic is still a temporary one, a questioning of what happened to the city and memories of the immediate aftermath of the storm. The coroner recalls being told effectively “You're it” when he asked about medical support in the heart of the crisis, a nurse remembers how she felt people would come to their rescue while her patients had given up hope – only for her patients to be proven right and her to feel a crushing sense that she had been clinging on to a feeling of entitlement that came from her white background while her patients had a more realistic understanding that they had been abandoned long ago. It's heartbreaking to hear – and harder yet is the feeling that while buildings have gone up since the storm, barriers have yet to be broken down.

Lastly, for a change of pace, try 99% Invisible. It's about architecture. It's about psychology. It's about how the former can shape the latter. The episode I listened to was all about the use of concrete in architecture and how it's a frightening material to use – because once you pour it, you're done, you have to hope it works the way you intended. The show insists that concrete is beautiful as a backdrop – considering some of the monstrosities I've seen using the material, I'm not convinced, but the reasoning is sound and the arguments delivered in a crystal clear way. Worth a listen to get a different view of the world and take notice of the 99% that is so often invisible to us all.

http://99percentinvisible.org
Posted by Leo McBride at 21:49