TALES FROM THE TAVERN is the debut publication of Inklings Press, featuring five tales of fantasy from five new writers. 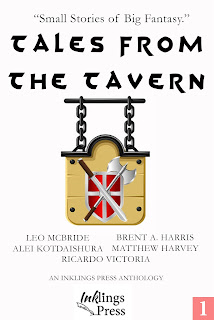 In The Bear-Trap Grave, Brent A. Harris examines the meaning of friendship for people isolated from civilization in a story from the edges of a fantasy realm.

True story, by Alei Kotdaishura, examines how often the ‘official’ version of an fantasy tale rarely has any similarity with the... true story.

Matthew Harvey brings a traditional fantasy story in the form of Battle at Veldhaven, a real treat of the genre.

Silver Horn by Ricardo Victoria is a more comedic take on the traditional heroic quest as a young man discovers more about his own past while taking on his epic journey.

In A Taste for Battle, Leo McBride uncovers the aftermath of a drunken rant by a charming rogue that ends with him and his friend in a rough spot against an invading army.

The book is available on Amazon here. Or for those who prefer the UK version of the site here.

Email ThisBlogThis!Share to TwitterShare to FacebookShare to Pinterest
Labels: Inklings Press, Tales From The Tavern