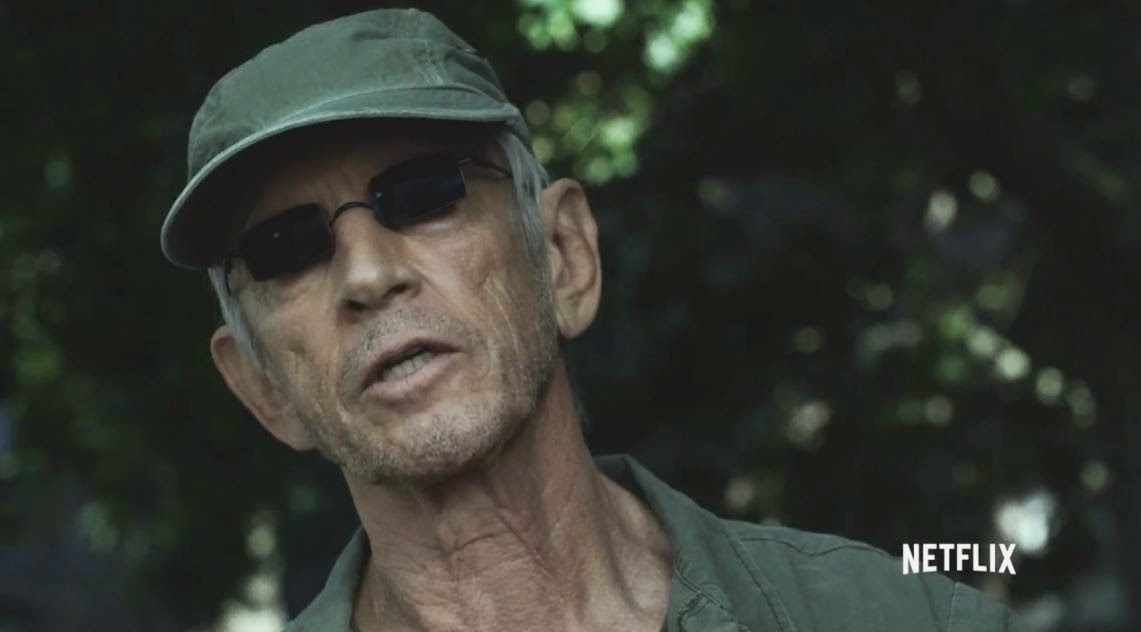 Stick and Stone may break my bones
Welcome to the world of Daredevil, Stick. Of course, we've met Stick before in the live action adaptation world, with the magnificent Terence Stamp starring in the role in the not-so-magnificent Elektra movie. Actually, scratch that. Not-so-magnificent is overselling it. I saw Elektra in a cinema on a free ticket and still wanted my money back. My buddy spent the entire movie telling Jennifer Garner to stop pouting. But I digress. Scott Glenn does a great job of lifting Stick straight off the page - with a dash of his Sucker Punch Yoda added in. You can almost hear his line of "If you don't stand for something, you'll fall for anything" making the journey from that movie to this show.

Stick is the mentor who helped a young Matt Murdoch to adjust to his blindness, his otherwise heightened senses and his need to kick ass on a semi-regular basis. We meet him in the show's opening, as he hunts down and disposes of a pesky minion, and then meet him again in the wake of Daredevil trying to hustle The Owl for information only to come up against the rough end of a taser. Full of sympathy, Stick asks Daredevil if he's going to lie there all night. Short version: Stick is a dick. To Daredevil, at least. And this is the saccharine TV version. The comics version has a habit of hitting Daredevil on a regular basis.

"You like ice cream?" "Yes." "Then shut up and eat it."
It's a trip into the past for a good chunk of this episode as Stick shows up at the St Agnes Orphanage to pretty much bully young Matt into training. (And remember, this is the same orphanage as Daisy/Skye came out of in Agents of Shield. That surely isn't going to be entirely unexplored).
? ecause he got nine years of sight unlike Stick, who was blind since birth. He takes Matt to a partk and gets him to use his senses to learn more about his environment. It's an exploration of origins, but it ends abruptly when the young Matt gives a gift to Stick. No explanation, but Matt is perhaps too good, too kind for the world that Stick lives in.

Black Sky
In the modern world, Stick wants Daredevil's help in stopping Japanese mobsters who are importing a weapon called Black Sky. The weapon turns out to be a child. Stick tries to kill the child, Daredevil stops him, but later Stick tells him he killed Black Sky anyway. But we never see that happen. Using the old Chekhov maxim of never introducing a gun in the first act if it doesn't later go off, I'm expecting to see Black Sky - or something connected to him - somewhere else down the line.

No heroes, no villains, just people with different agendas
Over in the continuing adventures of Ben Urich and Karen Page, we don't really get a lot of progress, though quite a lot of cynicism from Ben. That's probably healthy to counterpoint Karen's naivety as they investigate their way into trouble. Some of that trouble finds Karen in this episode, but coming to her rescue is... Foggy? Really? Couldn't Karen get out of trouble herself rather than being rescued by the least likely rescuer in town?

Hey, who is that at the end?
By the end of the show, Stick's reunion has ended bitterly, and he's off for a rendezvous with a mysterious figure we only see from the back. 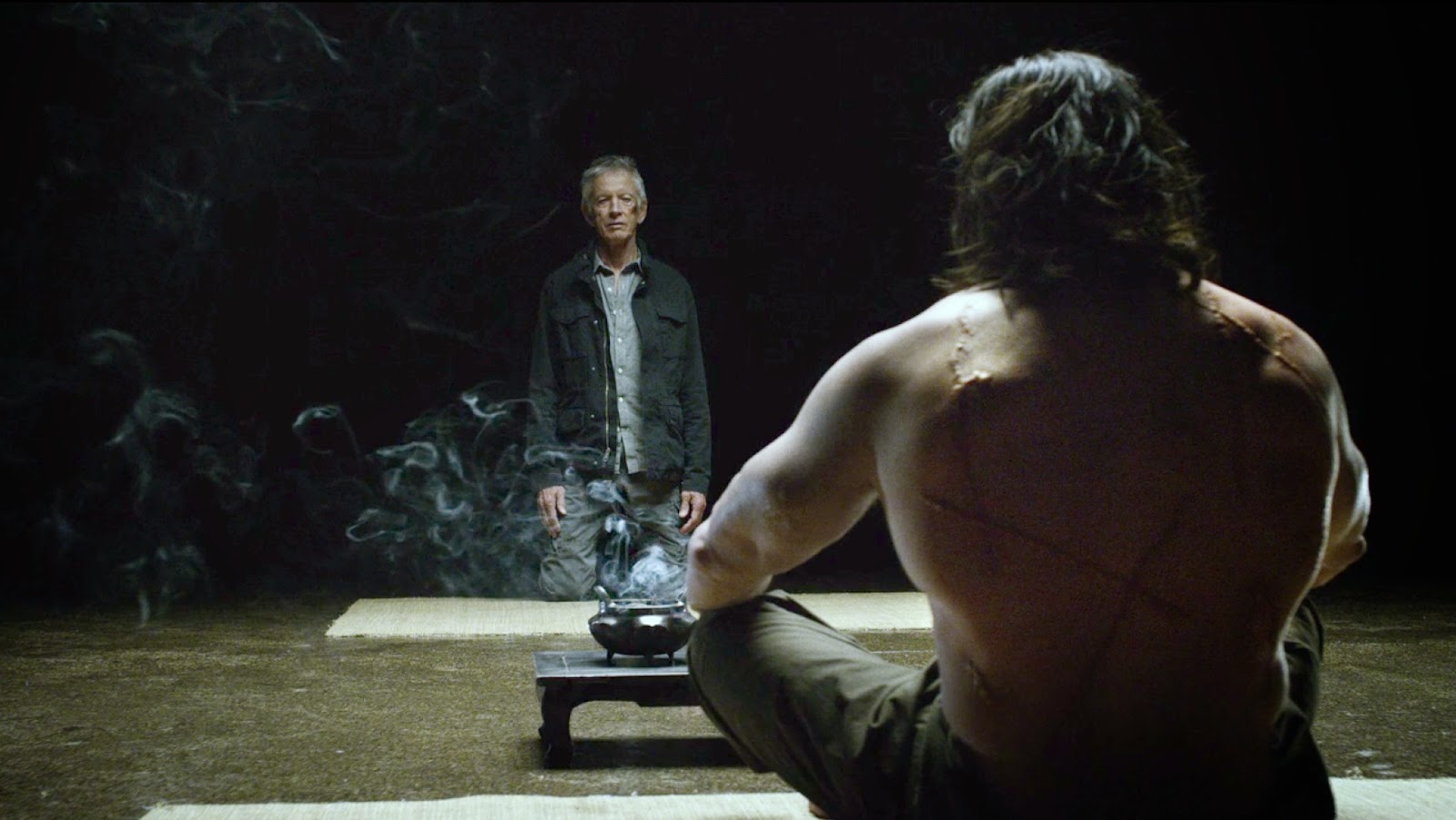 Who could this mysterious figure be? Well... 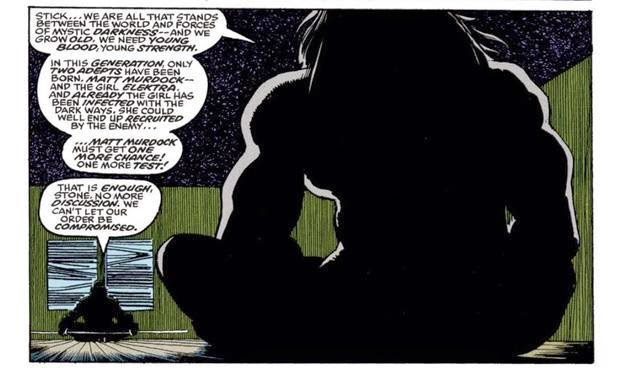 When the cinematography is this spot on to the comics, I think we can take it as read that this is Stone, a fellow member of the group of good ninjas that Stick works for, and with the ability to resist any blow as long as he sees it coming. Guess those scars on the back are because he doesn't have eyes in the back of his head...
Posted by Leo McBride at 22:47