My buddy Ricardo Victoria impresses the hell out of me.

And he's got the third book of his series coming out next year!

He asked me if I would mind doing a cover reveal here on the blog and, well, his covers are just as awesome.

That he does all of this and writes such great stories in his second language just makes it all the more darn impressive.

So without further ado... here's the cover for Tempest Blades: The Magick of Chaos! 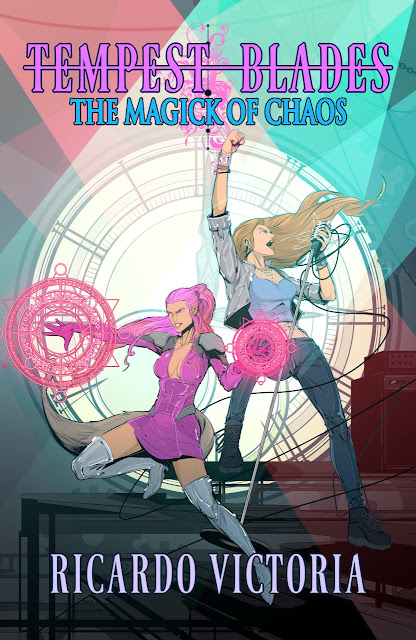 So what is this third book about? Here's the blurb and... right underneath, see that? Preorder link. Preorder. Dooo it. Dooooooooo it.

Tempest Blades: The Magick of Chaos

Action-packed adventure that blends science, fantasy, and anime-style battles into a thrilling, fast-paced story that will appeal to fans of anime, mangas, and RPG videogames.

Magick is in disarray. The Crown of the Dead has reappeared. Three gods appear, one fallen, one amnesiac, and one which corrupts. Two teams, two missions, and one world to save in a tight amount of time before everything goes to hell. While Gaby and Sam are dealing with their own inner turmoil, they must lead their respective teams onto a path that will make them both realize one important fact: You can choose who you want to be. Because in a world where magic and science intermingle, anything is possible. Including finding out if you are ready to step up. Are you? Preorder link for Amazon: https://www.amazon.com/gp/product/1951122607/Goodreads link: https://www.goodreads.com/book/show/62998106-the-magick-of-chaos
Posted by Leo McBride at 12:55