Meet the Author: Harry Turtledove, author of Three Miles Down 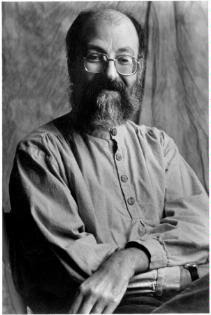 Dr Harry Norman Turtledove is an American novelist, who has produced a sizeable number of works in several genres including alternate history, historical fiction, fantasy and science fiction. He attended UCLA, where he received a Ph.D. in Byzantine history in 1977 - and has been dubbed “The Master of Alternate History”. He chats to Brent A. Harris about his new book - and much more.

Hello! Recently, I was given the opportunity to interview author Harry Turtledove to discuss his latest book Three Miles Down. Now, if you haven’t read this book, go ahead and read it as we discuss potential spoilers. You can get Three Miles Down here but pop into your local brick and mortar indie bookstore instead if possible.

Now that you’ve read the book (you have, haven’t you?) I really want to ask Harry some tough, difficult, um, introspective questions, like: What would your cats say if it they could talk?

Feed me! Feed me more! Give me the really good stuff, with the shrimp! Play with me! Adore me!” What do cats ever say?

Okay, so now that we got you warmed up, let’s talk about your book Three Miles Down. For the people who didn’t do the reading (yes, you back there, I see you) it’s a novel of first contact during the politically charged Watergate scandal. Now all this happens under the real-world guise of the too-strange-to-be-true Project Azorian where the CIA cleverly retrieves a chunk of a Soviet submarine from the depths of the Pacific. But in Turtledove’s book, that’s all just a cover for … wait for it… …Aliens.

How did the idea for this book First Contact you?

I had watched a documentary about Project Azorian on one of the channels you turn on when you’re awake at 3 in the morning and are looking for something to stare at. So I sorta knew what it was. Then I saw an ad for a book about it, and it occurred to me to wonder, What if the Soviet sub didn’t sink by itself? What if it had some help...from aliens? So I bought the book, and it led me to some more books, and I started writing at about the same time as the COVID pandemic started shutting down the world. 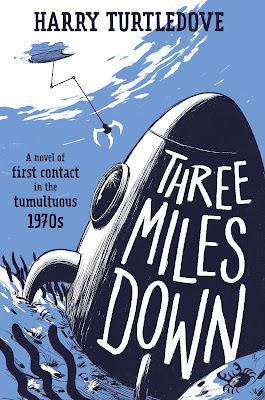 What can you tell us about Project Azorian without running afoul of any alphabet agencies?

The CIA spent a moon landing’s worth of money--several hundred million dollars’ worth--to build the Hughes Glomar Explorer and raise the Soviet sub K-129 from three miles down in the Pacific to see what it could learn about Russian nuclear missiles and codes. One claw on the grabber broke, though, so they only raised part of the sub--and not the most important part, either. A hell of a lot of money mostly down the drain.

Okay, you’ve tried not to be topical in your fictional worlds, but really: Cold War tensions and the looming threat of MAD, an unhinged President that threatens to unravel the Republic, and a rapid advancement of our understanding of our place among the stars … are we talking about your book or current events? Was there an obvious parallel here that you wished to explore?

You can’t not notice the parallels. I referred to them, sure, but I also tried not to beat people over the head with them. To quote Theodore Sturgeon, “Thou shalt not sell thy birthright for a pot of message.” Readers are smart. You don’t have to send up a bunch of flares to show them where you’re going.

Three Miles Down reads as a mash-up of Clancy meets SF. But most of all, it reads like a thrill ride down memory lane. Was there anything autobiographical to Jerry’s grad school experiences?

Does the Pope poop in the woods? Does a bear wear a funny hat?

Three Miles Down is heavily steeped in the popular culture of its time and only hints at war. Do you see a shift within a-h away from stories of warfare and toward social and cultural topics? If so, why?

I’m steeped in the pop culture of the 1970s. I’m a year younger than my protagonist. War is always interesting because, like love, it shows character under stress. Wars are also easy changepoints for history. There are other ways to change things, though--aliens at the bottom of the ocean, for instance.

You certainly don’t shy away from puns. In fact, they appear quite deliberate as if you meant to write them and then somehow slipped them past your editor. If there is indeed an afterlife, what do you believe your pun-ishment will be?

My editor for this book was Patrick Nielsen Hayden. He has been known to pun himself. Oh, just a little. I don’t think there’s an afterlife, exactly. I think there’s reincarnation. I aim to come back as a boutonnièrre.

This isn’t your first alternate history story that deals with aliens. Why are aliens a recurring motif in your work?

Aliens are a recurring theme in most sf writers’ work. They let you play with the Other, and with the Other’s effects on people, which is what I was especially interested in here. 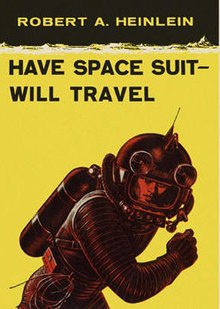 Have Spacesuit Will Travel plays an important part in the plot. But why this story of all the classics?

It’s one of Heinlein’s two best juveniles, imo--Citizen of the Galaxy is the other. It’s endlessly rereadable. And it involves humans unexpectedly meeting aliens. How could I resist? I didn’t even try.

Why, of all the SF writers in the 70s, did you pluck Pournelle for duty on the Glomar Explorer? Are there any other notables or Easter Eggs that we might have missed?

I knew Jerry for 40 years. Our politics didn’t mesh, but we always got on pretty well. He lived in Los Angeles. He was a conservative and an aereospace guy, the kind of sf writer the CIA might smile on. He seemed a reasonable choice

I didn’t really conceive of Three Miles Down as a-h. I thought of it as an sf novel that was necessarily set in the past. Alternate history to me is what happens when you get somebody who was rigorously trained as a historian and always wanted to write science fiction. 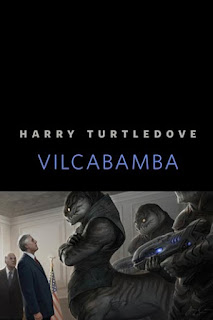 If First Contact were to happen right now, what do you think would happen, given the history of first contact between the Old and New Worlds?

I’ve written a novelette about this. It’s called “Vilcabamba,” and is available on the tor.com website. It’s pretty grim.

Your latest author photo is … unusual. How did that come about and is there a smirk hiding under that mask?

Three Miles Down was written as COVID was spreading around the world. One of my daughters took the pic. I thought it would be appropriate and amusing as a jacket photo.

What should the writers and gatekeepers of alternate history do to encourage diversity within the genre?

History is a question of perspective. The world does not look the way it does to a white male Christian from the USA if you’re a Nigerian Muslim woman. The more angles you can examine something from, the better off you are. We need those different perspectives.

What can you tell us about your forthcoming novel Wages of Sin?

Wages of Sin is set in 1850s England in a world where HIV got loose in the early 1500s. Given sixteenth-century hygiene standards--and given the simultaneous emergence of syphilis, which is real good at creating genital lesions--it would spread rapidly and be altogether untreatable. People would need a little while to figuire out what was going on, of course, but when they did, massive social changes would result. Since those necessary social changes fly in the face of humanity’s permanent impulse to get it on now and worry about consequences later, you have some obvious tensions. I’ve written about them.

Thanks, Harry! And everyone, if you want to connect with him, head over to his Twitter account at @HNTurtledove where he regularly posts pictures of his owners cats!\

• Interviewer Brent A. Harris is a twice nominated Sidewise Award author of alternate history and an editor behind the acclaimed Tales From Alternate Earths series. He writes stories and scripts about dinosaurs, steampunk Dickens, and smart homes that try to kill you. While he currently lives abroad one day he’ll return home to the sands of California to claim the Iron Throne. 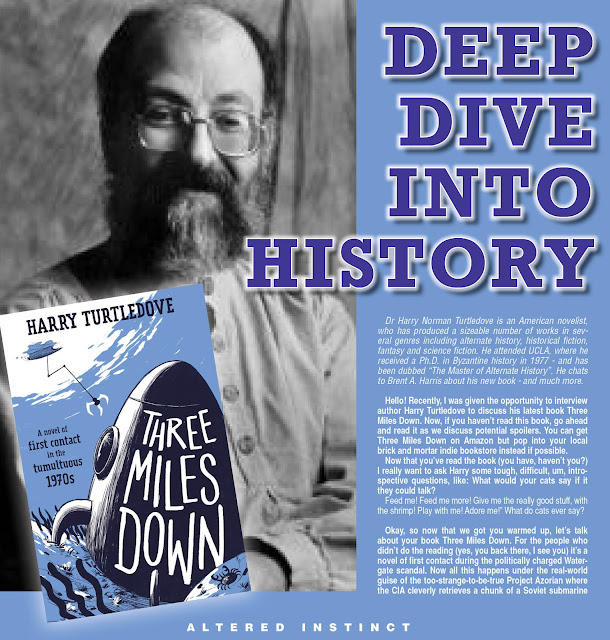 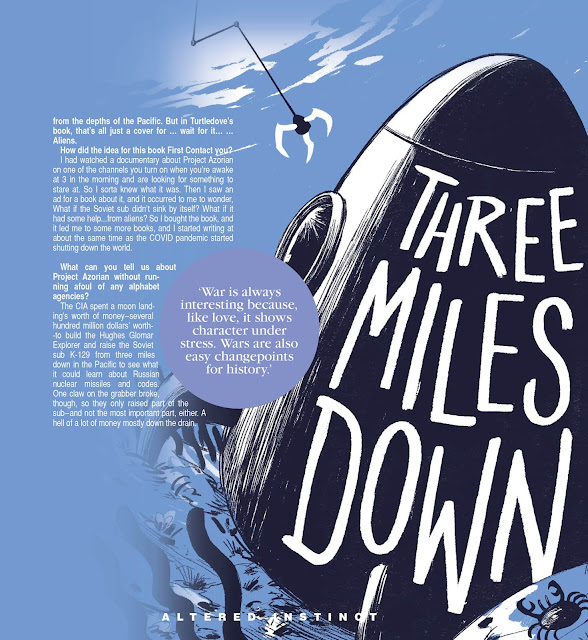 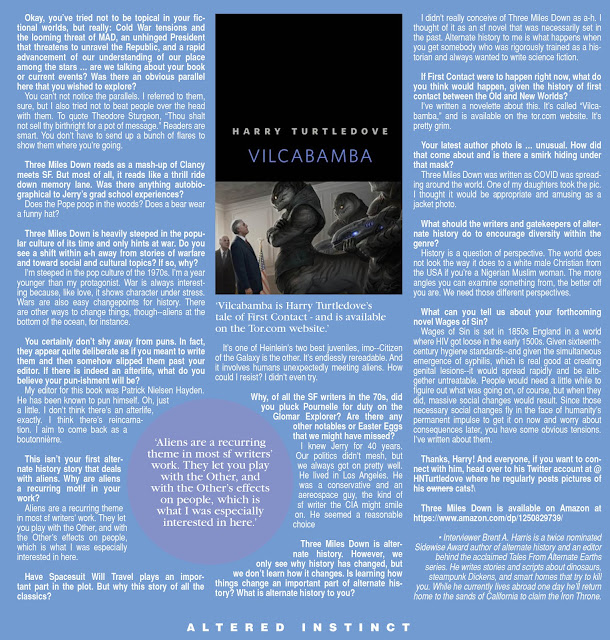