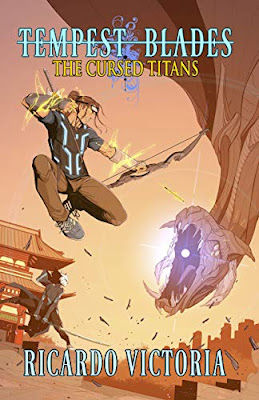 The Cursed Titans is the sequel to Ricardo Victoria's The Withered King. It largely stands alone - but the first book did so well at introducing its large cast of characters that it would be a shame not to start there.

This time around, with all those introductions done, the plot can rattle away at pace - and it certainly does that. This is full-on adventure, full of zip and zest, with witty one-liners being dispensed faster than the energy arrows launched by lead character Alex.

The plot centres around a tournament that doubles up as a way of nations resolving their differences. There is a swirl of politics around the tournament itself - and it provides the perfect opportunity for chaos itself to be unleashed.

I've said before that the Final Fantasy series is a good touchstone for Ricardo's writing, and it holds true here again. It has that anime spirit, that high sci-fi feel. There are new friends to be made, and new enemies.

Adventure? Check. Fun? Check. Freewheeling sci-fi? Check. If you want all of that, it's all here.

But what impressed me is that this time around there's something more. Alex is wrestling with depression, and the story explores that in some depth. I've been lucky in life, I've never really had to deal with depression personally, but the story spoke to me in the way it reflected what friends have gone through. It shows how characters around Alex deal with his depression - or sometimes how they don't deal with it, perhaps even not noticing it until it's pointed out by others. Sometimes I've been that person, who didn't notice or who didn't know how to react, so this story really hits home.

In the end, this is as much about Alex confronting himself as the monsters unleashed in the world, and the most important alliances and friendships are the ones that help him on that personal journey.

This kind of exploration of depression in science fiction and fantasy is not common - so Ricardo adds a welcome voice to the conversation.

This is a good read. A fun read. But it's also perhaps an important one.

Tempest Blades: The Cursed Titans is available on Amazon and through other booksellers.

Check out my interview with Ricardo here.