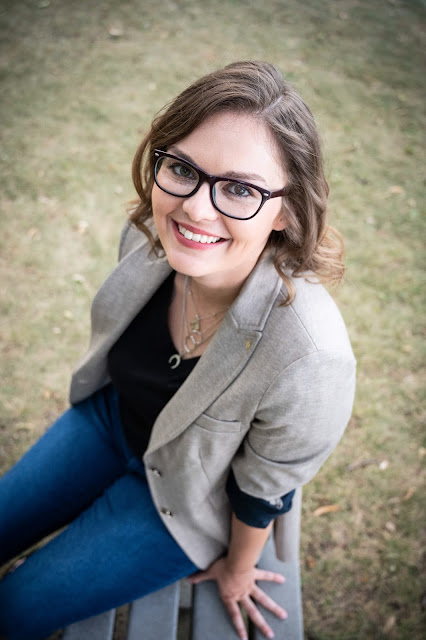 Kristin L Stamper is a writer of YA and adult science fiction - having also served in the US Navy where she gained experience in computers and robotics. And now her debut novel is out. Ternara publishes at the end of May, with pre-orders available now, and she stopped by the blog to talk about her work, her life, and... well, tribbles.

Tell us a little about your most recent book – what is it called, and what is it about? Give us your elevator pitch to make us fall in love with it!

Ternary is my debut novel: a sci-fi tale narrated by a sarcastic cyborg with a unique twist on a polyamorous love story. Elora, our recently mentioned sarcastic cyborg, has never been sure if she’s actually human or just an incredibly advanced simulation of one. But when the consciousness of a dead man is accidentally downloaded into her cybernetic brain, she finds herself falling for his still-living spouse and rediscovering her humanity—But are those her feelings or his?

There’s a section toward the middle of the book where the lead trio find themselves in dire straits. The main character, Elora, is doing everything she can to save them. But the thing about Elora is that she cannot allow herself to be seen in any kind of positive light. It’s a defense mechanism to keep from making genuine connections that will eventually lead to her getting hurt. Even when she is helping someone else, she’ll still find ways to twist it into a selfish act.

So, in this scene where she is trying to save the day, sacrifice herself to save someone else, and the pressure is really on, instead of being a hero—she ends up snapping. She goes off on this mini-tirade about dying and coming back to seek vengeance as an angry ghost. Somehow, she even manages to make the point that her dying will give her an advantage in an argument she’d been having earlier. Her intentions in the scene are good and yet her justification for them are ridiculously terrible.

I love this scene first of all because it was so much fun to write. Elora is already a fun character to write. Think Rocket Racoon meets Dr. House. But in this scene, Elora isn’t in her right mind, so her usual cold, stand-offish quips become a downright temper tantrum. But also, Elora is a grade-A self-sabotager, and that’s something I really relate to. Even when I am doing something right, I tend to have to find a way to blow it up. I just can’t help myself. And neither can she. So this scene, for me, is a turning point in the story where I really start to form a deep bond with Elora. 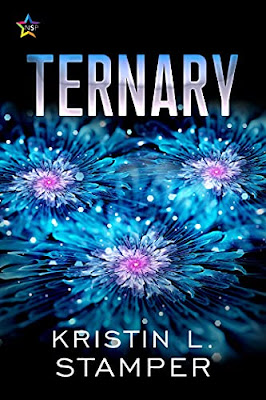 I think one of the most important themes touched on in this story is what it’s like to be the “other.” For the record, I am a white individual, and as such, I have no idea what it’s like to experience racial prejudice against me, nor would I ever claim to. This is not a story about race. If someone is looking for a story about othering in regards to race, they should check out The Forgotten Girl by India Hill—which I recently read and thoroughly enjoyed—or countless other books by authors of color.

I am queer. However, it has been my personal experience (and others’ experiences will be different) that I have actually been through more othering, more prejudice, more persecution merely as a woman in society than I have being queer. I was raised in a family of all boys. As the only girl, I was always left out of everything. My family was also the kind to strongly value boys and more “masculine values” if you will, causing me to feel that I was literally worth less than my brothers. Additionally, we were a military family. We moved every 2-3 years. Which meant outside the home, at school, I was always the new kid. I had few friends, and it seemed whenever I made any close connections I would move away shortly after.

As an adult, I joined the military to pay for college. And I have to tell you. If you ever want to experience being the other, try being a shy, artistically inclined, smallish woman in the military.

All these things combined means that I have literally never been a part of anything. I have always been the odd one out. And when everyone around you sees you as the odd one out and treats you differently, it really wears on you. You internalize it. You begin to see yourself as the other as much as they do.

This is exactly what Elora experiences in this story. As a cyborg in a society that recently defeated a robot uprising, she is the other. She is unaccepted by those around her. She’s different. And Elora has really internalized that. So not only does she have to actively fight for her place in the solar system, but she has to do so while not really believing that she deserves it. Or knowing for sure if she even wants it. And even when it comes to the romance aspect of the story, which is poly, she still finds herself as the odd one out. Her love interest is already married to someone else, so how does she fit into that? It’s a theme that’s tied into all the events of the book.

What do you like to do when you’re not writing?

Firstly, I’m a single mom of a three-year-old. That takes up a good portion of my time. But I love her more than anything, so I’m completely okay with that. She’s the most important thing in my life. I’m also a college student. I’m trying to rewrite my life a little bit. Trying to find where I belong. And in that effort, I’ve been working toward a degree in Special and Elementary Education. I should have my license within the next few years. Most of my life goes toward those two things.

But when I’m not chasing a three-year-old or doing homework, I’m into lots of artsy type things. This summer I hope to get back into plushie making. I’ve made a few in the past. I’m really terrible at it, but I also refuse to look up patterns (I make my own), and I don’t have proper materials so I always end up MacGyvering it. I also do digital art, although I haven’t really done anything in a few years. I might try to create a few images for the launch of Ternary. If I do, they’ll be popping up on my Twitter.

I love when readers tell me about which of my characters they have crushes on. My very first reader referred to Bertie as “Best Boyfriend Bertie” throughout their review, and I’ll never forget that. I also had a few readers tell me about how much they loved Gareth’s subtle insecurities. Elora hasn’t had so many crushes so far (most of my readers so far have been cishet women and gay men), but she’s gotten lots of compliments on her snarky attitude. Basically, I just love hearing the different things people like about the characters. They’re very close to my heart, so it means a lot.

Star Trek. Let’s just get that right out of the way. Yes, I love Star Trek. Yes, there are Star Trek inspired elements in Ternary. Star Trek is such an integral part of who I am. I have seen every episode of every series. I’ve been to conventions. I love the lore, the universe, the way it focuses on a future in which humans came together and thrived instead of falling apart.

I am all about this idea of looking to the future through a hopeful lens and seeing the best of what we could be instead of viewing it through a dark, dystopian, apocalyptic lens. And I’m all about sci-fi that is built on thoughtfulness instead of just shooting lasers and beating up aliens (although shooting lasers and beating up aliens is also good—just in moderation). So, yeah. Let’s go to Quark’s and bond over Romulan Ale. Live long and prosper. Stay away from the borg unless Janeway is your captain. Don’t feed your tribbles.

You can find me on Twitter (@klsmopit) and my website and blog are both in the same spot (kristinlstamper.com). You can also subscribe to my newsletter (https://mailchi.mp/2779c7e71480/kristinsub).

What are you reading at present, and what is the best book you’ve read in the past year?

Right now I am reading The Wild Robot Escapes by Peter Brown. I’ve been reading a lot of MG fiction recently. I really highly recommend The Wild Robot. But the best book I have read in the past year is Children of Time by Adrian Tchaikovsky. It is a brilliantly written and thoughtful sci-fi story about a group of humans on their way to a new world after the Earth is destroyed and the alien race of spiders who already live on that world. 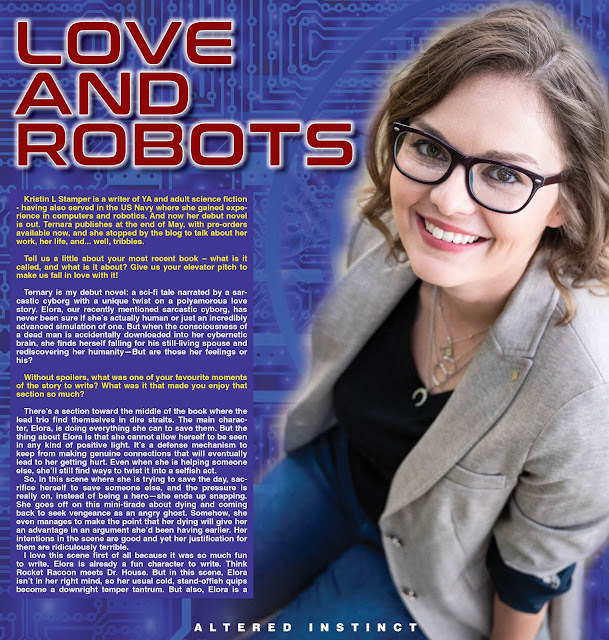 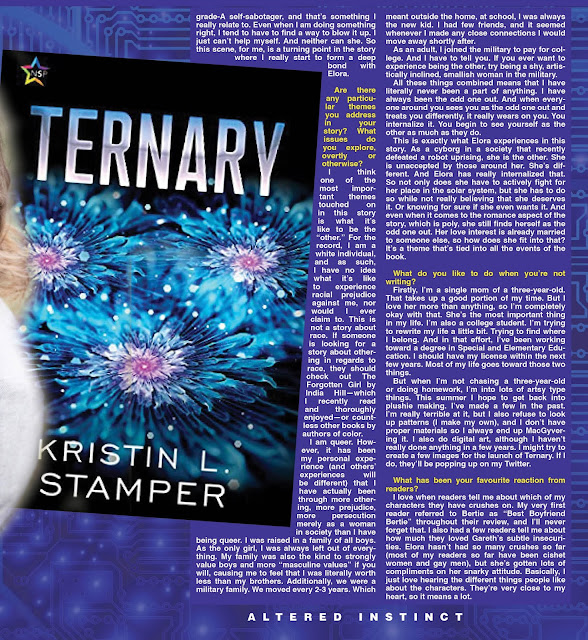 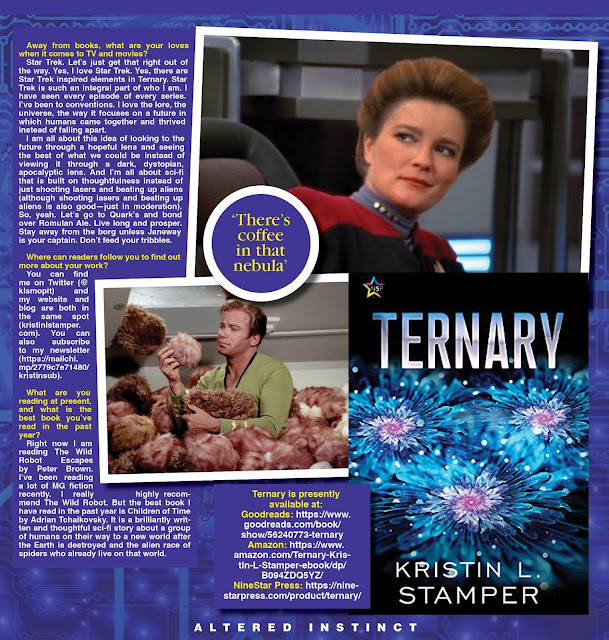