BOOK REVIEWS: Becoming Superman, by J Michael Straczynski; Rise and Rescue anthology; Every Heart A Doorway, by Seanan McGuire; Alien: Out of the Shadows, by Tim Lebbon

Welcome back to my latest round of reviews - which this time around includes a Hugo nominee.
Without further ado... 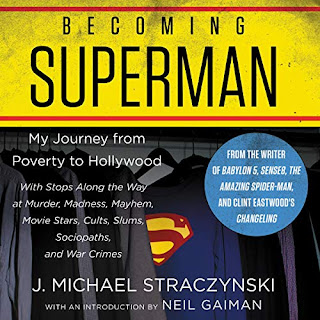 Joe Straczynski is the creator of Babylon 5. I mean, you may know him from many other things. You may know him as the pen behind Sense8 on Netflix. You might know him from The Changeling, the Angelina Jolie movie directed by Clint Eastwood. Or Jeremiah. Or Spider-Man comics. Or... well, you get the idea. He's been involved in writing for TV and movies for far longer than many writers manage to stay in the ring.
This is his autobiography - and while you might think it's a happy trip through the successes he's had over the years, it's far from that. Indeed, it's far more intimate and personal than that.
This is the story of the young boy Joseph, and his abusive father, who tormented his whole family. It is a story that tells of Nazi sympathising. Of murder. Of a boy trying to grow up sane with a family life that was far from stable, moving from town to town and skipping out whenever people showed up to collect money.
Sure, it tells how he went through the early cycle of writing stories that turned out to be not so great, then writing more, and more, and banging his head against the door of rejection. There's the glimmers of encouragement, such as when the stranger who read his work at a school event and said there was promise in there turned out to be Rod Serling. But this is a story of a boy who fought to be a man free of his father, of a man who fought to get his stories accepted, and a TV writer who fought against the restraints imposed by executives all too often - to the point of his agent's exasperation.
He describes one moment in his youth - in which he gets the shit kicked out of him by a bunch of kids only to stand up and taunt them so they came back and did it again as, in retrospect, being the perfect preparation for becoming a TV writer.
There's a great deal of insight in here to the projects he worked on - from the Real Ghostbusters cartoon, to Murder She Wrote. As a Babylon 5 fan, I particularly hung on the material to do with the show - even the saddest notes with the death of some of the cast members over the year. I listened to the audiobook version, narrated by Peter Jurasik from the show, and the poignancy of those moments came across in two voices mourning old friends, the writer and the narrator.
More than anything, though, this book tells the story of Mr Straczynski's relationship with his father. So determined was he not to be like his father, his life in some ways seem to have been defined by purposely choosing to be the thing his father was not, the shape of his life being dictated by non-conformity to the monster he grew up with.
It's a brutal story to tell. There are no end of truly shocking moments. And yet, despite what he had to endure, he ultimately defined himself, who he would be, and rose to the success his father said he wouldn't reach. Is it inspirational? I'm not sure that's the word. That's like those moments when you see what people have gone through and pat them on the head and call them an inspiration. That's not quite right. No, but it is admirable. With a stubborn streak a mile wide, he managed to achieve things that had never been done before. And he did it with a sharp wit and a ready pen.
This book has been nominated for a Hugo Award. It certainly deserves it.

Becoming Superman is available on Amazon 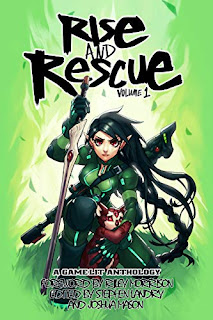 Game Lit is one of those sub genres that has really burst into life in the past few years. The idea is that it is literature that revolves around gaming - computer gaming, roleplaying, that kind of thing. As such, it has its own particular quirks, and some of this anthology is more heavily immersed in those quirks than other stories.
First thing first, though, this anthology is for a good cause - it's helping out in the aftermath of the fires that swept Australia. There are Australians writing here, and other writers from the world around who also wanted to reach out and help.
One of those odd quirks in game lit is sometimes providing statistic updates for characters as you read. It can throw you a little, especially if this is the first time you're encountering the genre, but hey, that's the genre, it is what it is.
For me, the stories I enjoyed more played less on that - I really liked Anthea Sharp's Spark Jaxley story which kicks off the anthology, in which a gamer takes her shot at trying to win a world title and maybe give her family some financial hope in the process. It's quite brilliant.
Then there's Marcus Sloss' fun snippet, Texas Wildlife Volunteers, which looks at the victims of fire themselves and serves as a nice break from the other stories.
KR Dimmick's Hacked tells a story of a group quest on an online roleplaying game where only the players can save the day, while EM Swift-Hook plays gently with the genre by flipping the perspective to an NPC adapting to the new rollout of an update to a game that may have some unusual consequences.
There's scorching fantasy in Jane Jago's Dragon Riders, with a flame of passion too, and wartime action from lawrence Dagstine's The War Module.
Like any anthology, some stories will catch you more than others - but this is a solid bunch of reads with some that really shone to me. And, of course, it helps those who need help.

Rise and Rescue is available on Amazon 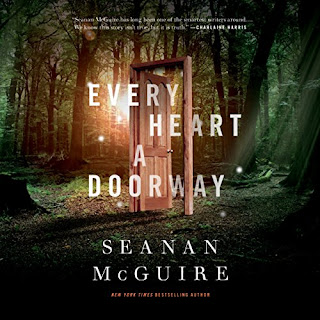 Every Heart A Doorway, by Seanan McGuire

The concept behind Every Heart A Doorway is quite brilliant.
When the fairy tale is done, where do the children from them go? The ones who disappear down rabbit holes, or through the back of a wardrobe, what happens to them next?
This is the story that explores that, in a school that is a kind of limbo for children as they wait to go through their next doorway, the one that takes them to the land that will be their perfect fit.
It's weird and delightful and enchanting. More than that, it looks at these children and what they are looking for themselves. What they want. What they need. What they desire. What they would call home.
Wrapped around a murder mystery, it counters the gossamer touch of fairy tales with the harsh reality of being a child out of place. It tackles LGBT issues and more.
For some, this will be a book that hits them right in the soul. It didn't quite get me the same way, but I found much to admire.
I will confess though, I listened to the audiobook version and I urge you if you want to tackle this book to read the words on the page instead. The narrator for the audiobook had such a monotone that it stole the magic from the words and rendered them dreary. It was a chore to listen to at times, and didn't serve the book well.
So turn the pages and hear the voice in your own head instead, it'll serve you better.

Every Heart A Doorway is available on Amazon 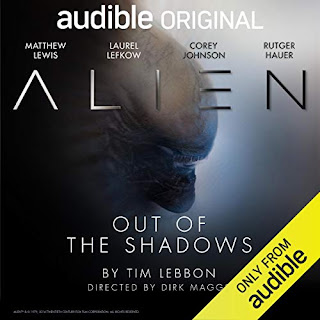 Alien: Out of the Shadows

Inserting itself in between Alien movies, this audio drama wakes up Ripley before she gets rescued at the start of Aliens. The crew of a mining vessel wakes her up, and unfortunately find themselves having to deal with the xenomorph threat she hoped to have left behind.
There's another survivor from the first movie too - Ash, the android, who has become a ghost in the machinery of her escape capsule's computer, surviving as only a voice and a an aggressive way of taking control of other machinery. Of course, when the voice is that of Rutger Hauer filling the role, you've got a lot going for you.
Indeed, the audio production quality on this is really absolutely superb. The background audio of wet alien bites or acid hissing or steam pipes venting while alarms sound and so on is excellent. You're pitched into a claustrophobic world as Ripley allies with the crew of the mining vessel Marion, led by the engineer Hooper, to first try to stop the aliens and then just to survive them. Sadly, they don't make the most of having Rutger Hauer on board, dumping him with a bit of a role giving recaps rather than involving him more, but heck, he's great whenever he appears. Laurel Lefkow, as Ripley, also does a great job, really inhabiting Sigourney Weaver's role.
The script doesn't live up to the performance, and you'll soon spot the way in which characters live long enough to fulfill their solitary function before being gobbled up by angry aliens. Still, as a show, it's great fun, creating the feel of a big action movie in your headphones.

Alien: Out of the Shadows is available on Audible