I've been quiet on the blog recently - and it's been for sad reasons. My Dad died shortly before Christmas. It was expected - he'd been in declining health for a while - but nonetheless the moment is never easy. There was a lot of travelling - to go see him before he passed, and to go back for the funeral. There's been little time for much else, but I wouldn't have wanted to use my time better. Farewell, Dad, sleep well. 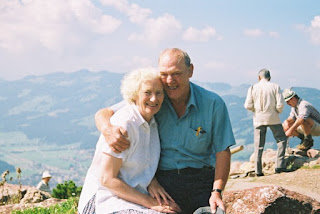 George Hunt with my mum, Maureen Hunt, in Austria

George Harold Hunt was a Yorkshireman who fell in love with an Irishwoman and the Irish culture. He was born in Tickhill, South Yorkshire, on August 3, 1933. As a young man, he played football – notably breaking the leg of a future Busby Babe - and was offered a contract to become a professional. Instead, he became a sailor – and it was that decision that led to him seeing the world, and meeting the woman he would marry.
One of his voyages took him to Rome, and on shore leave, he sought out a place to see the seven hills of Rome. He said that as he watched, the sun came out from behind the clouds and lit up each of the seven hills in turn. He said he knew something special was going to happen to him after that. His next voyage brought him to Derry, where he met Maureen.
Maureen was an Irish Catholic – and at first alarmed to have the attention of an English sailor. When he asked her when he could see her again, she told him she’d be at a dance in the deepest, most Catholic spot in Derry – a no-go area for Englishmen in uniform. As she walked in, George and two of his shipmates stood up from the seats by the door where they were waiting for her to arrive. The romance began. The following week, he told his parents he had met the girl he was going to marry – and in the courtship, he even hitched a ride in a two-seater Spitfire to go see her.
George and Maureen married and had five children – Bernard, Michael, Mary, David and Stephen – and settled to live in Coleraine. We often used to say that Dad was the most Irish of any of us - playing Irish music loud and drinking Bushmills whiskey. Both George and Maureen played their part in trying to overcome the religious differences in Northern Ireland at the time – Maureen set up the first non-religious playgroup in Northern Ireland, and George was the first Catholic to become a senior official in the British Legion there, and he was planning to stand as a councillor for the Alliance party. The Troubles were in full flow – and he received a death threat for his efforts to seek peace amid the politics of the time. That, and an opportunity to move to a new job at Seal Sands, led to the family moving to Middlesbrough, where both he and Maureen lived the rest of their lives. They loved to travel, they loved seeing their family grow as they became grandparents, and they were very happy together. George was a keen golfer, a regular at the Municipal Golf Course for many years. Faith was important to him and Maureen and the family were regulars at St Francis Church until the past few years.
Maureen died in 2004, and George often talked about how much he missed her. As his health began to fail in recent times, he would say how he was ready to be with her again.
George died on Saturday, December 21, 2019. He was 86. He passed away in his sleep. In his last weeks, he got to see all his children – and even met his first great grandchild for the first time.
George is survived by his sisters, Kathleen and Margaret, and his children, Bernard, Michael, Mary, David and me. He was much loved, and will be much missed.