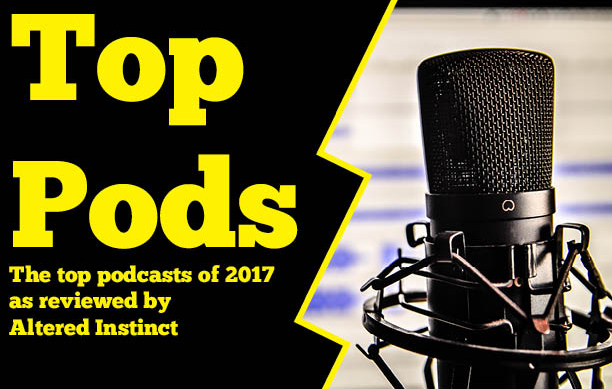 A version of this article appeared previously in The Tribune on January 5.


As the New Year begins, it’s time to look back over the very best of the past year – and in the podcasting world, there have been a lot of great shows to check out
With some tough decisions made, then, here are my top five podcasts that I reviewed in 2017.

Ear Hustle
Ear Hustle is a show that gives the microphone to prisoners at San Quentin prison. The show I reviewed talks about the SHU, the security housing unit – though the one featured in this show is not at San Quentin but at Pelican Bay State Prison in Northern California.Solitary. It talks to four prisoners who have spent prolonged periods in solitary confinement – and it’s a world away from the one we know. “It’s the hole, the dungeon, the box,” as co-host Antwan Williams says.
Solitary confinement is just that – cut off from human contact – and the prisoners talk about the effect that has on people. From starting fights with guards just to feel some human contact, to finding ways to extend just the slightest tip of your finger through the grill of the door to be able to touch the fingertip of another prisoner to have some kind of contact with a friend.
There are prisoners who struggle to put full sentences together because they say they become so disconnected – who struggle to remember what they’re talking about during a sentence.
“Your mind can trick you into adjusting to the immediate conditions,” says Antwan Williams – a prisoner himself – and you can hear that in the conversations with other prisoners. There’s a mix of bravado and fear, and you can hear how hard the experience is in the voices of those being interviewed. Sometimes the conversation is broken, disjointed, such as that of one prisoner who spent 19 years in solitary.
There’s also some talk of what it’s like to come out of solitary – the adrenaline rush that goes with it, the strutting across the prison yard after you’re out. And there’s even some talk of what it’s like to kiss a woman again after being a prisoner for so long – you hear the almost adolescent delight of the prisoners talking about that, saying that it’s like having a first kiss again.
This really is a brilliant podcast – it’s only half an hour or so in length but it packs a lot in there and really opens your eyes to a world we perhaps choose not to look at. It certainly makes you wonder about the life behind bars of those closer to home.
Website: https://www.earhustlesq.com/

A show looking squarely at the issue of missing people – and it’s a powerful, painful show to listen to. The episode I listened to focused on the case of Mimi Lewis, who was just 14 years old when she disappeared from her home in Kosciusko, Mississippi. She was later found dead, and those are just the bare facts of a story that touches on a host of issues of law enforcement, child protection – even the language we use – that end up stacked against the young people who find themselves in impossible situations.
The show features a long discussion with Sandye Roberts, of Halos Investigations, a group that aims to help children in danger of going missing. They talk first of all about how the label of runaway gets too easily applied – as if the missing child is just off on a Huckleberry Finn style adventure instead of at risk from predators, smuggler and more.
In the Mimi Lewis case, it appears the police simply didn’t investigate. She was just a runaway. And then she was dead.
Roberts highlights the risks that children face – increasingly. From websites that trade in children’s bodies to smugglers that turn towards trafficking in people rather than drugs because they can sell people’s bodies more than once, it’s a horrific, harrrowing tale – and it’s one that’s all too common, as common as the chat software on the games that children play.

I’ve reviewed Modern Love before – it’s an excellent show – but by chance a remarkably fitting companion piece to S-Town was the show I reviewed featuring a reading by actress Laura Dern of a piece by Rhonda Mawhood Lee. She reads about a pastor speaking to her parishioner, a 78-year-old man who had fallen in love with a 28-year-old man – to the shocked reaction of his church.
The show includes reaction to the piece – but one of the concerns is again that, unfortunately, the story comes after the fact. Ned passes away. So is his story someone else’s to tell? Ought we to be discussing, no matter how compassionately, their sex lives, their loves?
It fits into the same territory as the discussion of McLemore above – and while I have no answers to the questions it raises, it is beautifully done and thoughtfully executed.
Modern Love is very well worth a listen – even when it raises awkward questions.

Faculty of Horror
One of my favourite podcasts is Pseudopod – a podcast giving readings of horror stories. It was one of my podcasts of the year last year and a regular listen for me. So when they gave a shout out to Faculty of Horror, it had to go on my review list – and I’m awfully glad to find them.
Faculty of Horror is hosted by Andrea Subissati and Alexandra West, who analyse a host of horror movies across the episodes they’ve recorded.
The first show I encountered focused on rape revenge movies such as ‘I Spit On Your Grave’.
I was somewhat wary of trusting a show I’d never listened to before to cover such movies in a non-exploitative way – heck, such movies themselves don’t really do that – so I chickened out and listened to the previous episode, an in-depth study of the brilliant movie ‘The Descent’.
If you’ve never seen ‘The Descent’, it’s a fantastic horror movie from Neil Marshall, whose most recent career highlights have been becoming the go-to guy for the big battle episodes of ‘Game of Thrones’.
It follows a group of women as they explore a cave system on an adventure holiday. Except the cave system they’re exploring isn’t the one they thought they were – and they’re not alone down there.
The hosts are incredibly knowledgeable. The information about the movie just trips off their tongue in a way that shows the depth of their knowledge of the movie. The analysis is great, taking in everything from the set design through to feminist readings of the film.
Geek that I am, I thought I knew just about everything there was to know about this movie – but the hosts went far beyond what I thought I knew. They are engaging, the production is excellent, the analysis is on an academic level and... well, I probably shouldn’t have chickened out on that first show, right?

Editor's note: I'm always on the look out for more podcasts to review - so if you have a podcast you'd like reviewed, or have a suggestion of a favourite I should check out, drop a note in the comments below.