AUDIOBOOK REVIEW: Lineage: A Beginning, and A Blessing in Disguise, by C H Clepitt 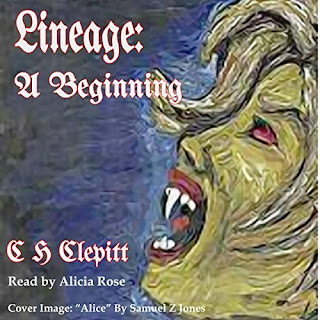 I review a lot of podcasts - but I've seldom delved into the world of audiobooks. I'm not entirely sure how much that will change, but it's not for a lack of love for the format. With a house full of family and a work full of busy, it's rare I get the chance to hear audio narration, let alone concentrate on it. So this might be a very irregular feature on the blog where I cock an ear towards storytelling off the page.

I got lured in by the appearance of Lineage: A Beginning on Audible. It's from CH Clepitt, who is something of a favourite of mine from her Crew Chronicles series.

She has a knack of making you want to read more - or in this case listen more. Lineage does just that. This is a tale of vampires and vagrants, in which a down-on-her-luck girl who makes bad choices in boyfriends ends up caught between gang bosses and something a whole lot more dangerous - and the key to her survival lies in, fittingly enough, her blood.
For Emma, the lead character, has an ancestry - a lineage - that marks her out as more special than she believes herself to be.

It's a touching tale - full of neat little touches, such as the explanation for why vampires don't go out in daylight being that natural sunlight shows them as they would look at their true age.

The end - without offering spoilers - gives a launch point from which I want to know more, and look forward to finding out where this tale will go next.

It's only a short story - probably about 5,000 words or so - but great for a quick read for the bus or train, and even I managed to listen to a good chunk of the narration in my short commute to work.

A particular shout out to the narration, by Alicia Rose, which I didn't settle to at first but the more I listened, the more she nailed the mood of the piece. She has a voice that reminded me of Natalia Tena - who played Osha in Game of Thrones - with a hint of danger in her narration. 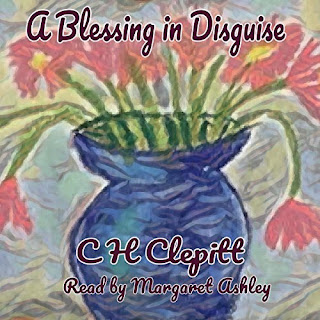 A Blessing In Disguise is a very different affair - in fact, something of an affair of the heart.

It's the first book in a series that sees the first sparks of a middle-aged romance. Linda finds herself being made redundant and, in short order, having to move back to her childhood home after her mother has a stroke. That might sound less than cheerful, but then romance twinkles as a possibility for Linda - and something absent from her life becomes a tantalising possibility.

I can't lie - this isn't at all my genre, but the writing is brisk and spritely, and the delightfully measured narration by Margaret Ashley fits the bill neatly. It's quite short again, and you could listen to both if you have an hour to spare. If gentle romance and light comedy are what you look for, then this might well be the kind of thing that makes people look across at you as you chuckle away with headphones clamped firmly over your head.

While Lineage is more my kind of book, I can't separate the two in terms of rating - so an AI rating of 4/5 for each.

Both audiobooks are available at the links below: