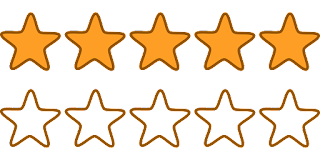 The other day, I saw a reviewer ranting on Facebook.

She's a smashing soul, who reviews an incredible number of books - in between writing her own. More than that, she's one of the most open and generous folks I know, endlessly supportive of other writers - so to see her making a number of posts in annoyance was very out of character.

So what was the source of the annoyance? An author, who had taken issue with the review - an honest one - she had written of his book. It got to the point where she had to block him because he started swearing at her over her review.

Now, of course, that's ridiculous, but what makes it even more ridiculous? It was a four-star review too - he got upset and started swearing at someone who had given of her time and honest opinion because the review was one star short of his perceived perfection.

That kind of behaviour is disrespectful to the reviewer, of course - thankfully she had enough sense to dust him off and carry on doing her thing - but it shows even less respect to readers. After all, that's who he's really trying to fool.

Perhaps the whole thing bugged me because it followed closely on the heels of an author complaining to me about a review I'd written. It was a one-star review - so I can understand disappointment. But up popped this sudden message on Facebook moaning about the review but congratulating me on an award. I hadn't won an award, but hey, why let some poor fact-finding get in the way of a gripe? There was no attempt to clarify what might have been problematic in the book, just a grump about being given a one-star review.

With reviews being important in marketing, of course, I understand why authors are so keen to maximise the scores they have to show the world. Heck, for some promotional services, an average rating of more than four stars is required to be able to take part. That shouldn't mean manipulating the scores, though - it should just encourage the authors to keep doing better.

It's not the only way I've seen authors trying to fool readers in recent times. As well as pressing reviewers for higher scores, lately I've seen an author claiming a bestseller status for their book after listing it in a tiny category unrelated to their actual book, for example. Another author I saw touting their how-to guide - despite constantly asking others for help in that same area. That sort of thing just ends up giving people bad advice rather than pointing them to real experts.

I review a lot - and I always give my honest impression of what I'm reviewing. I've been doing it for more than 20 years in a professional capacity, and I think honesty is key. Dishonesty ill serves the person reading the review, and it equally undermines the genuinely good reviews you give things.
When I give five stars to something, the person who created it should know I really mean it, that I hold it up as the best of the best.

In short, according to the criteria of Amazon's listing, I loved it.
Posted by Leo McBride at 22:50