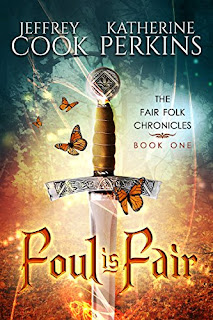 Foul is Fair, by Jeffrey Cook and Katherine Perkins

This book is a charming delight - and I say that knowing it's not at all my usual kind of read.
Foul is Fair is a Young Adult fantasy tale about a teenage girl named Megan O'Reilly who discovers that fairy realms are real - and that she might not be entirely human herself.
Suddenly threatened by a menace from that fairy world, Megan and her best friend team up with a pixie riding a crow and a satyress whose chariot is drawn by a pair of leopards to seek out her father, and the sword that could prove the key to freeing him.
It's the characters who draw you in most of all here, from Megan, the schoolgirl who is struggling with ADHD and the medication she uses to cope with that, to the pixie without wings who dares to be part of the quest, or the gleefully pansexual satyress pointing out that, after all, Pan is very sexy.
The early part of the book moves a little slowly - and perhaps gets bogged down in too many characters telling Megan about how the fairy realm works - but once we reach the fairy court, the book is off and running, rattling away at a fun pace with dialogue that sparkles. It's not all light and breezy though - there are weighty matters in here too, as Megan comes to terms with who she is, as we see people choose their sides and the reasons why, and as the fairy quest tips our own world into peril.
More than anything, I really enjoy the acceptance of such a delightful cast. Seeing such a great range of female characters is very, very welcome. The book wears its influences on its sleeve, from a clear love of Pratchett through tips of the hat to a host of punk world favourites - such as A Clockwork Orange or the music of Lindsay Sterling. But the book is very much its own thing, carving its own path in the young adult field.
Here's to more adventures from Megan and her friends.

Foul is Fair is available on Amazon here. 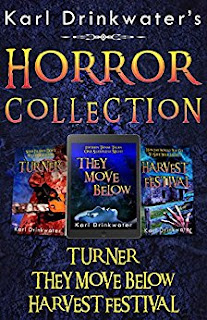 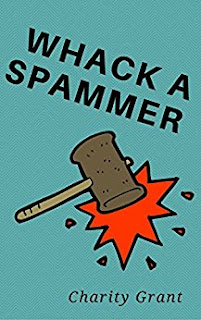 Whack A Spammer, by Charity Grant

Charity Grant says what many an author might think but not speak out loud in this short little book. She's fed up of the spammers and the crooks who make the life of genuine writers more difficult by filling up the likes of Amazon with poorly produced, quickly written piles of nonsense masquerading as books on a hot subject. They'll have extra pages of thank yous and copyright notices just to pad out the book for payment in page turns and they'll be badly edited and entirely a waste of your time. So how to beat them? Well, Charity's got some tips there - from leaving very deserved one-star reviews to remembering to mark clearly fake reviews as unhelpful. This may be a short book, it may be a bit of a rant, but it has to be said, she's spot on. So go and mark a genuine review as helpful today and try and beat the spammers!

Whack A Spammer is available on Amazon here.
Posted by Leo McBride at 10:20