This article previously featured in The Tribune Weekend section of March 24.

If you are a movie lover, there’s a host of podcasts out there covering all manner of films.
This week, we focus on podcasts that embrace the weird, the wonderful and the scary. 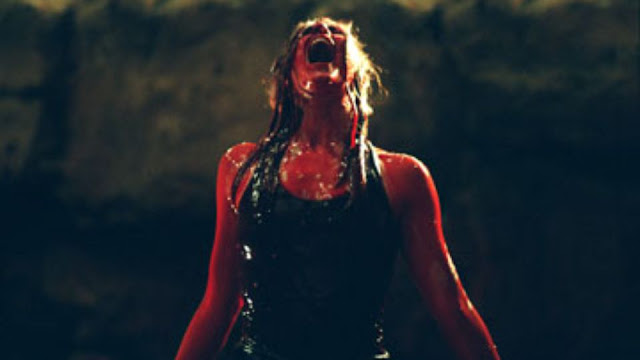 An iconic moment in The Descent - a modern horror classic

Faculty of Horror
One of my favourite podcasts is Pseudopod – a podcast giving readings of horror stories. It was one of my podcasts of the year last year and a regular listen for me. So when they gave a shout out to Faculty of Horror, it had to go on my review list – and I’m awfully glad to find them.
Faculty of Horror is hosted by Andrea Subissati and Alexandra West, who analyse a host of horror movies across the episodes they’ve recorded.
The latest show focuses on rape revenge movies such as ‘I Spit On Your Grave’.
I was somewhat wary of trusting a show I’d never listened to before to cover such movies in a non-exploitative way – heck, such movies themselves don’t really do that – so I chickened out and listened to the previous episode, an in-depth study of the brilliant movie ‘The Descent’.
If you’ve never seen ‘The Descent’, it’s a fantastic horror movie from Neil Marshall, whose most recent career highlights have been becoming the go-to guy for the big battle episodes of ‘Game of Thrones’.
It follows a group of women as they explore a cave system on an adventure holiday. Except the cave system they’re exploring isn’t the one they thought they were – and they’re not alone down there.
The hosts are incredibly knowledgeable. The information about the movie just trips off their tongue in a way that shows the depth of their knowledge of the movie. The analysis is great, taking in everything from the set design through to feminist readings of the film.
Geek that I am, I thought I knew just about everything there was to know about this movie – but the hosts went far beyond what I thought I knew. They are engaging, the production is excellent, the analysis is on an academic level and... well, I’d best stop chickening out and go back and listen to the latest episode, hadn’t I?
Website: http://www.facultyofhorror.com

Nightmare on Film Street
With the same format – two hosts chatting about a classic movie – Nightmare on Film Street is an ideal companion to Faculty of Horror.
Hosts Kimberly and Jonathan are unashamed enthusiasts for the horror genre. You can hear the love as they chat about the movies. The episode I listened to compared the Tim Burton movie ‘Sleepy Hollow’ and the Guillermo Del Toro tale ‘Crimson Peak’ – both lush, Gothic romances as much as they are horrors.
They don’t stick as tightly to their subject as the Faculty of Horror crew, even ranging across to chat about such things as the voice of the actor who filled the Darth Vader outfit in ‘Star Wars’ (though, pointer to the hosts, he had a Cornish accent and not a posh English accent, the video is out there of him speaking in the suit and it’s well, well worth finding for comedy value).
That said, when they go off piste, they go there because the conversation is fun. There are spoilers to be had in here, but the hosts are up front about that, so no accidental spoilers here.
If Faculty of Horror is an academic analysis, this is the show that makes you think of hanging out with your horror nerd buddies and picking apart the movie on the drive home from the cinema. Great listening.
Website: http://nightmareonfilmstreetpodcast.com

30 Minutes of Diabolical
This is an odd one, in that it is as much a soundscape as a podcast. The episode I listened to focused on the Red Planet – and what that ultimately meant was a roaming chat about things to do with Mars, including conspiracy theories about a bunch of Martian-related movies all coming out at once and joking that it was really all a cover to give excuses for NASA not really having sent a probe to Mars but shot all their footage on the back of a sound stage somewhere.
Ultimately, the hosts settle on talking about the Arnold Schwarzenegger movie Total Recall. Not, we hasten to add, the remake, which is a horror story in itself that a studio thought that was a good idea. The analysis, it has to be said, isn’t terribly deep, though the hosts clearly know the movie and pick out the various moments they feel were cool.
But simmering in the background is music inspired by the Red Planet – and interwoven at the end with moments from the Arnie movie. It’s a nice idea, creating a work of art out of the material they are talking about, and if the examination of the movie alongside it was more rigorous, this would be a belter of a show. As it is, it felt a little light, but with great potential for the future.

Got a podcast you'd like to see feature in our reviews? Drop me a line on Twitter @AlteredInstinct or leave a note in the comments.
Posted by Leo McBride at 14:41